By Allan Fox: WBA interim super featherweight champion Chris Colbert (15-0, 6 KOs) weighed in successfully, coming in at 130 lbs on Friday at the weigh-in for his title defense against replacement opponent Tugstsogt Nyambayar (12-1, 9 KOs). The 2012 Olympic silver medalist Nyambayar weighed in at 129.6 lbs.

The New Yorker Colbert came in overweight at 130.6 lbs in his first weigh-in attempt on the scales.  Colbert came back later after going to the dressing room, and he was able to weigh in successfully at 130 pounds.

He stated that he shaved his beard in the dressing room, and that was all that was needed to take the weight-in.

On Saturday night, Colbert vs. Nyambayar will be heading on Showtime Boxing at the Dignity Health Sports Park in Carson, California.

The 24-year-old Colbert was originally supposed to face Yurirokis Gamboa, but he pulled out a week ago, making it necessary for Nyambayer to be brought in as a replacement.

Colbert has proven to be an excellent talker, and he’s gotten a lot of attention this week with his comment about Deontay Wilder.

Colbert also isn’t in the same league as some of the fighters at 126 as well. If you put Colbert in with some of the featherweights like Gary Russell Jr, Emanuel Navarrette, and Rey Vargas, the wheels would come off his game.

With that said, Colbert has got enough ability to beat King Tug on Saturday.  As long as Colbert doesn’t get clipped, he should be fine.

When Colbert was being interviewed this week, I wouldn’t say I liked how he sounded and the way he was blinking his right eye. He’s starting to show wear & tear from some of his recent wars with Jaime Arboleda and Jezreel Corrales.

Colbert’s lack of power forced him to go deep into both of those fights and many of his others as well.

That’s the problem for fighters that don’t possess power like Colbert. They’re forced to go the distance to win their fights, which leads to them absorbing a lot of punishment that others don’t have to deal with.

Colbert is a good secondary champion, but he doesn’t pop in his punches to take him to the next level. He should beat King Tug on Saturday by using his speed and skills to outbox him, but he’s not likely to knock him out.

Colbert is predicting a knockout, but that’s not going to happen. If Colbert attempts to score a knockout, he could get caught by one of Nyambayar’s heavy shots and taken out.

Nayambayar has a clear advantage in punching power over the light-hitting Colbert. But where Nayambayar is deficient is with his hand speed. He’s too slow to beat the guys with blazing hand speed like Colbert and Gary Russell Jr.

Last year, Nyambayar challenged WBC 126-lb champion Gary Russell Jr for his title and was beaten by a 12 round unanimous decision by a wide score.

Russell Jr started strong, landing well and building up a big lead. However, in the second half of the fight, Nyambayar fought well and landed some huge shots.

He didn’t do enough to climb back into the fight, but he still made it interesting to watch. King Tug landed some nice shots on Russell in that fight. I’m not sure that Colbert could take them as well as Russell did.

Despite Russell Jr winning by a convincing 12 round decision, it was arguably his toughest fight since losing to Vasily Lomachenko in 2014.

King Tug has the power to win this fight on Saturday, but he’s going to have to land something big on Colbert late in the fight after he tires. 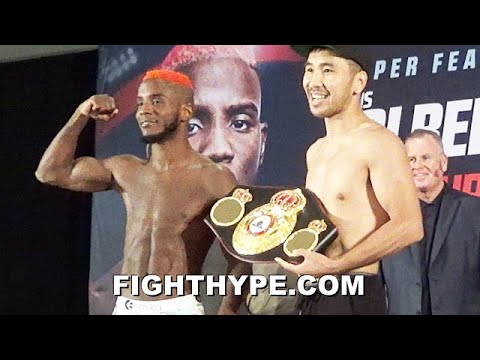 
« Kalvin Henderson vs. Isaiah Steen on July 23 on Showtime