By Jim Maltzman: Jermell Charlo could be biting off more than he can chew this Saturday, July 17th, when he faces all-action fighter Brian Castano in the main event for the undisputed junior middleweight championship at the AT&T Center, San Antonio, Texas.

If Charlo loses this fight against the non-stop puncher Castano, we’ll see a rematch. Charlo won’t want to walk away from the loss without trying to avenge it.

But we may see Jermell, 31, suffer his second career defeat, and it could be by knockout. Castano, 31, has a high-pressure style that Charlo has never seen before as a professional, and it’s going to be interesting to see how he deals with what he brings.

Castano has the Shawn Porter style of fighting

Charlo vs. Castano will be televised on Showtime Championship Boxing this Saturday, July 17th starting at 9:00 p.m. ET/6:00 p.m. PT. All four 154-lb titles will be at stake for this fight, and the winner will be crowned as the undisputed champion.

Castano’s fighting style is like former welterweight champion Shawn Porter with the way he presses his opponents on the inside. Where Castano differentiates from Porter’s style of fighting is with his combination punching ability.

Castano doesn’t look to maul his opponents on the inside the way Porter does. His specialty is to machine-gun them with numerous combinations in close, forcing them to try and match him or flee.

In Charlo’s case, it’s difficult to imagine him moving away from Castano. It’s more likely he’ll brawl with him, which could ultimately be a mistake.

Jermell may need to knock Castano out for him to avoid suffering his second career defeat on Saturday. Charlo isn’t likely going to be able to match Castano’s punch output, and he’s not going to beat him at his own game on the inside.

Jermell has done well to bounce back from his loss to Tony Harrison in 2018, but he hasn’t faced anyone nearly as talented as Castano in the three years since then.

Charlo has been winning consistently since 2019, but he’s beaten anyone that Brian Castano would have had problems with.

Jermell wants to do something Mayweather couldn’t do

“Hey, they’re going to talk about you and say this about you, but who I am internally is who I am,” said Jermell Charlo to Showtime Championship boxing.

“I’m a loving person; I’m a genuine person. I’ve got a very good heart, and I know that about me.

“Not everybody just wants to come out to be a villain. I want to be a guy that people like and love. I don’t want people to comment like, ‘Oh, Jermell is the bad twin, or he’s the evil twin.’

“My brother has his own way of doing things. We don’t often. He’s got his own world going on.

“We got ups and downs, yeah. I see completely different than some of the things he sees. We’re going to run into drama.

“My dad introduced me to the world of boxing,” said Brian Castano. “He was a professional boxer, and he put me in the ring when I was little.

“Like any father that wants the best for his children, he’s been by my side my whole career. He kept me off the streets. I’ve beaten great fighters like Errol Spence,” said Brian Castano.

“I’ve also beaten Sergiy Derevyanchenko. Today, the doors have opened for this opportunity. Being a world champion is the goal for every boxer.

“The unification of the belts is something unique. I now have this opportunity, and I’m giving it my all to lock it in.

“I want to take this victory home, and make history and become a legend in this sport.

“Two days after I got married, my manager called me and said, ‘I just got you plane tickets. You fly tomorrow,'” said Castano.

Brian Castano has options if he wins this fight on Saturday, starting with a rematch with Jermell.

With that said, if Castano wants to strive for something a little higher than that, he can move up to 160 and go after Charlo’s twin brother, WBC middleweight champion Jermall.

Beating the other Charlo brother would be huge for Castano, and it would wreck the dreams of the two becoming superstars.

Charlo vowing to turn into a monster 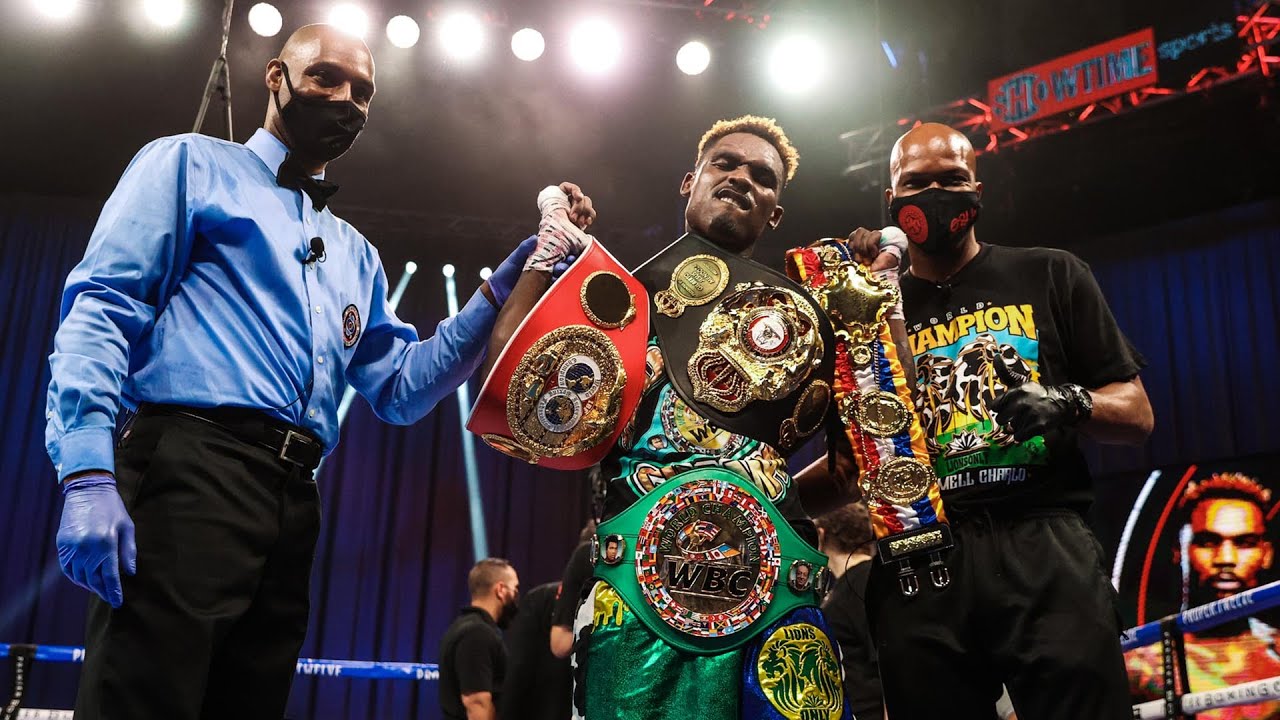 “This is when Daddy turns into a different monster. First, I think about my roots and where I come from, what I got to produce. This is what’s going to make me different,” said Charlo.

“Earlier today was the first time watching him fight this guy [Castano], which is good because we’re trying to see what kind of fighter he is,” said Jermell’s trainer Derrick James about him watching a video of Castano.

“He’s a good fighter. He just broke that particular guy down, but that guy isn’t Jermell Charlo. That’s the difference.

“Fighters like that bring out the best in Jermell Charlo. Jermell knows he has to be at his best to make history,” said James.

“Jermell is very misunderstood, and that’s something that probably bothers him a lot. I think he’s an ‘I’m going to show you the type of fighter.’

He’s [Castano] the WBO champion, and to be the undisputed champion is the goal.”

“Me and Derrick have been working together for six years now,” said Charlo. “Derrick has a really genuine feel to the way he moves.

“Derrick, he looks for the best interest for my style and my fighting heart.

“When it’s time to work, I’m there listening to him. People talk crazy about me. I got to go get him,” said Charlo.

If Charlo is going to bum-rush Castano, he will need to be careful that he doesn’t get clipped. Castano might break an overly aggressive Jermell Charlo like he did Patrick Teixeira and Erislandy Lara.

“I do consider myself as one of the best fighters on the planet,” said Jermell.

“I’m pushing myself every day. My ambition is different; my determination is there.

“You know, the fight for the four-belt era for the undisputed championship. Now it’s my turn. Brian Castano is in the way.

“I’m not underestimating nobody. I know for a fact what I got to deal with.

“It’s not my fault that I feel like I’ve seen every style that I’ve been in the ring with people that push and press and people that do all kinds of things.

“All of that. I’m a warrior. I’m just here to fight and be very vicious. The best man wins; that’s all I care about. I don’t care.

“I’m going to push myself all the way through. I’m a fighter that wants whatever.

“You want to hurt me. I’m coming to kill too. I want all that. I don’t care about this, like everybody thinking.

“The belts don’t make me. I just want to fight. I’m a warrior. That’s all I’ve been doing since I was eight years old.

“I’m going to make him do something he don’t want to do. That’s what I got to do,” said Charlo.

You can understand why Jermell is talking so aggressively, as he’s shown flashes of power in his recent fights against Jeison Rosario, Tony Harrison, and Jorge Cota. However, Jermell isn’t a big puncher like some of the KO artists in the past, like Julian Jackson.


« Charlo vs. Castano undercard for Saturday