By Jeff Aronow: #2 WBO heavyweight contender Joe Joyce (13-0, 12 KOs) turned back a motivated Carlos Takam (39-6-1, 28 KOs) in beating him by a sixth round knockout in a highly competitive fight on Saturday night at the SSE Arena in London, UK.

Joyce was too big, too strong, and too active for Takam to handle the fast pace that he set. Although Joyce looked excruciatingly slow of hand, his nonstop attack mode style was too much for the old lion Takam.

Takam, 40, gave it his all trying to earn a second world title shot against WBO heavyweight champion Anthony Joshua, but it wasn’t to beat. Joyce stunned Takam with a big hook in the sixth and then went for the finish to get a referee stoppage.

Takam looked absolutely furious after the fight was halted, perhaps remembering his loss to Anthony Joshua four years ago in 2017.

That fight saw referee Phil Edwards step in and stop the bout in the tenth round after Joshua had hurt Takam. Tonight looked like a similar situation, but Takam was worse off after eating a couple of big hooks from Joyce.

You can’t fault the referee for stopping the fight because Joyce was unloading on Takam, who was staggering from every blow that he hit him with. Had the referee not stop the fight, Takam surely would have been dropped.

Earlier in the fight, Takam got the better of Joyce in rounds one and two. He was beating Joyce to the punch and connecting with big power shots.

Joyce took the blows well, as he had in his previous fight against Daniel Dubois. He wasn’t bothered in the least by the hard blows from Takam.

Joe Joyce turned the fight around

In the fifth round, Joyce seemed to hurt Takam with a body and headshot late. As the round ended, you could see that Takam would have problems in the sixth because he was tired and badly hurt.

Joyce continued where he left off in the sixth round, hitting Takam with massive shots and hurting him. Rather than clinch to buy time, Takam continued to fight back, and that was a mistake on his part.

Joyce took advantage of Takam’s bravery by unloading big punches that hurt him worse. Finally, the referee Steve Gray stepped in and stopped the fight rather than wait for Joyce to poleax the badly hurt Takam.

The loss for Takam perhaps ends his hopes for a second-world title shot once and for good.

It’s not likely that Takam will ever get another opportunity like this again. Indeed, the defeat will knock him out of the top 15, where he barely held his position at #14 with the WBC.

Joyce is the WBO secondary mandatory after Oleksandr Usyk, and he could challenge for a world title next year.

“I don’t want to cry because I lost the fight. You seen what happened,” said Takam to Behind The Gloves. “No comment. I want to congratulate Joe Joyce for winning the fight.

“He’s a good champion. But I really think some referees here [UK] don’t like me. I don’t want to say all, but some of them don’t like me.

“You seen the fight. Yeah, the guy punched me, one, two, three. I was there. I put my hands up, and I was waiting for everything.

“I was waiting for him to get tired and come. So when I want to come, the referee stopped the fight. I don’t know why.

“I asked him. I was really pissed off this time. I said, ‘Why?’ He always said, ‘No.’ I don’t know what to say. Come on, you seen the fight. I was winning the fight by one round,” said Takam when told that it looked like he’d stopped punching and was starting to take punishment from Joyce.

“I don’t know why he [the referee Steve Gray] stopped the fight because I don’t throw a punch. I was waiting for the right moment to start to trade a punch.

“You see that he was a little bit tired. I was watching him with my hands up, and I see he was really tired. When I started to come, the referee stopped me, so I really don’t know what to say.

“Yes, I’m going to go home and take some time off and see my promoter [Joe DeGaurdia]. He’s going to contest for that fight [with Joshua], and I’m going to see what’s going to happen now.

“Definitely, I want a rematch. I want a rematch because two times is enough,” said Takam referring to tonight’s fight being stopped prematurely in his eyes as well as his 2017 fight with Anthony Joshua, which took place in Cardiff, Wales.

“I want my rematch. I really don’t know what to say because I was not thinking the fight would end like that.

“Everybody was not happy. They text me, and they write me and say, ‘Why was that fight like that?’ I don’t know. The referee stopped the fight. I don’t know why.

“They shouldn’t have stopped the fight. Like I said before, they stopped; I come here to win. I come here for a war.

“I just want to thank everybody that came to support me for the fight. So I’m here. I will be back in the UK to fight.

“Don’t worry about me, don’t worry for me. I’m good. I have nothing. Did you see my face? Nothing. I’m here. Thank you, my UK fans,” said Takam.

It’s unlikely that Takam will get a rematch with Joyce because it wasn’t controversial enough of a stoppage. Yeah, it looked premature, but you can argue that Takam was hurt and he would have been in trouble if the referee hadn’t stopped it. 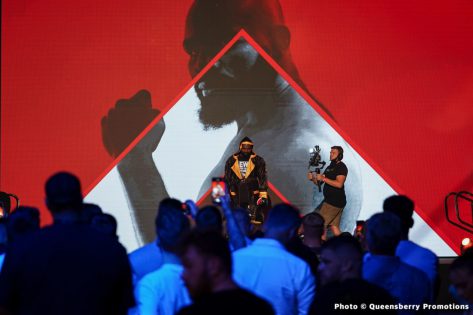 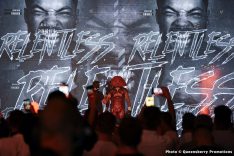 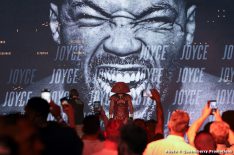 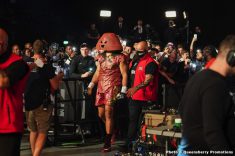 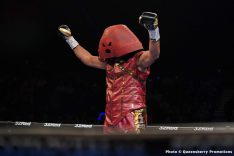 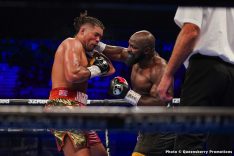 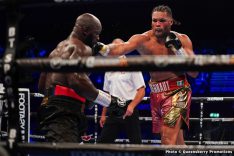 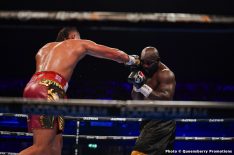 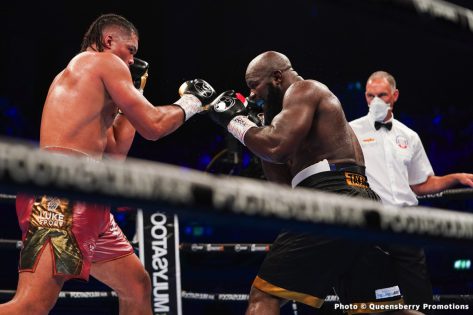 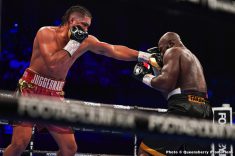 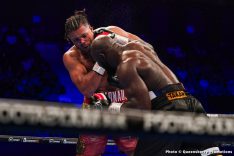 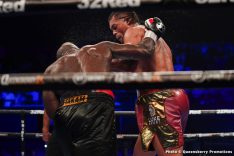 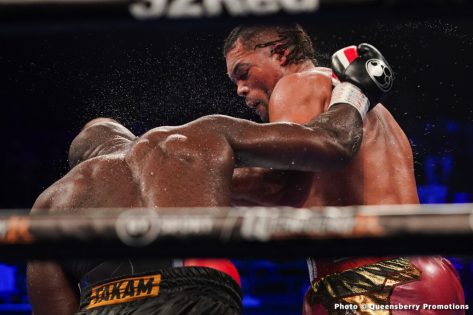 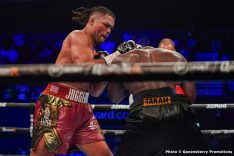 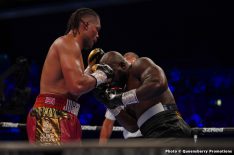 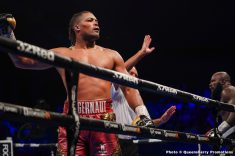 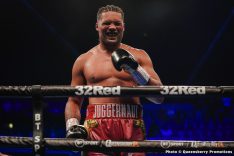 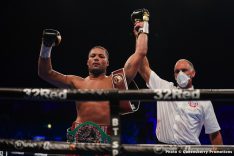 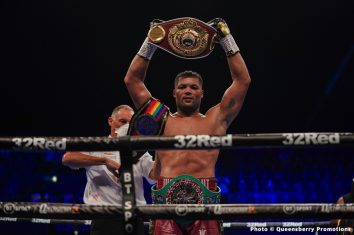 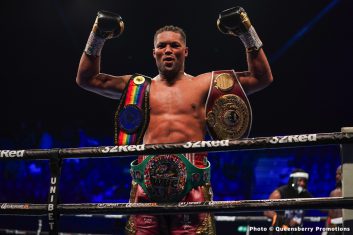