By Tommy Gray: Ryan Garcia gave fans a look at his training on social media on Friday, letting them see him prepare for his next fight announcement coming soon. Ryan’s power and speed look to be as good as ever.

The undefeated lightweight contender Garcia (21-0, 17 KOs) is looking sharp and powerful working out on the bag, getting a headstart on training camp.

Many fans have given up on Ryan Garcia

Regrettably, Ryan has lost some of his fans with his decision to pull out of the scheduled July 9th fight against Javier Fortuna.

For many of Ryan’s fans, that was the last straw, as he’d already called out Manny Pacquiao, Devin Haney, and Gervonta ‘Tank’ Davis without fighting any of them.

When it appeared that Ryan was finally going to take on a live body against #3 WBC Javier Fortuna, he backed out, saying that he had anxiety issues.

Some of the fans that have given up on Ryan now view him as a mere Instagram fighter, a guy that poses and preens on social media, but never fights anyone worth noting. 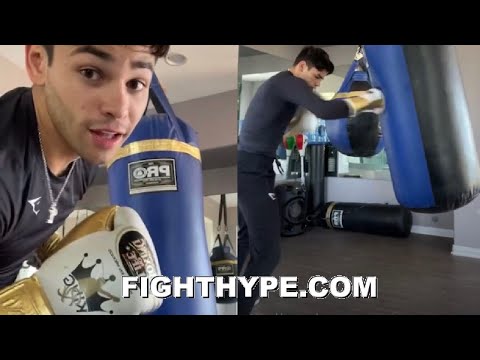 It’s not too late for Ryan to bring back his fans, but it’s going to require him to show stability as far actually fighting the guys that he calls out. Above all, Ryan needs to show that he’s not a clout-chaser and that he’s actually willing to fight the top guys.

Ryan Garcia ready to get back in the ring

“No matter what, I can fight and I go in there to put the best fight for the world watching,” said Ryan Garcia on Instagram.

“I turn into another person in the ring. I know my problems became public but I’m still a fighter, hungrier than ever.

“Boxing is my life and I’m ready to fight. Love you guys for supporting me through this weird time.

“I’m charged up,” Ryan Garcia continued. “I feel so much Right now; I’m just ready to get back in the ring,” said Ryan.

The toughest opponent to date Ryan has fought as a professional is Luke Campbell, who he stopped in the seventh round last January. In that fight, we saw both the good and bad from Ryan.

He was dropped hard in the second round by Campbell, but he came back to stop him in the seventh.

What many critics took note of in that fight was how flat-footed, upright, and stationary the 22-year-old Ryan, which made him an easy target for Campbell’s shots.

That performance showed many flaws that would get Ryan potentially hurt if he chose to fight one of the better offensive fighters at 135.

If Ryan’s promoters at Golden Boy Promotions were considering putting him in with a top lightweight before the Campbell fight, his performance that night likely caused them to pump the brakes hard on that idea.

Golden Boy has a big decision to make in terms of Ryan’s next fight. If they put him in with someone too good, he’ll likely get exposed and get stopped. With Ryan’s anxiety issues, they could resurface big time after a loss, and he might choose to retire.

Ryan already walked away once from a fight, and he might choose to walk away permanently when/if he finds out that he doesn’t possess the elite world-level talent to compete with the best. As the saying goes, ‘Once a quitter, always a quitter.’


« Who Holds the Record for the Most Successful Title Defenses?

Naoya Inoue: Is he the next Pacquiao? »