By Dan Ambrose: WBA World light welterweight champion Mario Barrios (26-0, 17 KOs) is planning on showing that Gervonta ‘Tank’ Davis (24-0, 23 KOs) made a massive mistake in picking him to fight this Saturday night.

The size advantage that the 5’10” Barrios will enjoy in this fight against the 5’5 1/2″ Davis is unreal. Even Barrios sees it as “crazy” for Tank to be moving up in weight two weight classes to fight him.

He’s unsure what Tank or his management at Mayweather Promotions saw in him to pick him out. Whatever it is, he’s going to show that they made a mistake.

It’s possible that they noted that Barrios gives up his height easily and fights on the inside against his shorter opponents. If Barrios fights like that on Saturday, he’ll give Tank a chance of beating him with his uppercuts.

Barrio’s trainer likely will have discussed the importance of not fighting Tank in close.

Barrios: This dangerous fight for Tank

“My team will want me to use my length and my height, but Tank is a very quick fighter and an explosive fighter,” said Mario Barrios to Fighthype.

Tank is trying to do something great, and I can respect that. Even his team knows this is a perilous fight for him, and that’s exactly what it is.

“I don’t know what they might have saw,” said Barrios when asked what made Tank Davis’ team choose him to fight for a title against at 140. “They might have seen some weaknesses, or they might have thought that they did. I’m just making sure I’m prepared for this fight and ready.

“This is a huge step up in competition for each of us. I don’t feel I have to raise my level, but this is definitely a fight where I have to rise to the occasion,” Barrios said.

It’s a perilous fight for Tank, going up two weight classes to take on Barrios.

Even though Barrios isn’t considered one of the top three fighters at 140, he’s still unquestionably a top 10 guy. Tank is taking a big step up in both size and talent.

One would assume that Tank’s promoters at Mayweather Promotions have done their homework to vet Barrios and deem him a non-threat to beating him.

But if it’s Leonard Ellerbe that made the decision, there’s an excellent chance that Davis loses this fight. Floyd Mayweather Jr is a different story.

If he’s the one that personally checked Barrios out to give his blessing on Tank fighting him, you have to feel more relaxed about this fight.

Mayweather has proved throughout his long career that he has the Midas touch in picking out opposition that he knew could beat. As such, Mayweather was likely the guy that decided to let Tank fight Barrios.

“Santa Cruz did show that Tank can get touched up, and it’s going to be a dangerous fight if I’m able to touch him up the same way Santa Cruz was.

“I know what I have to do, and I know what threat I have in front of me. All that matters is what happens when we step foot into the ring on June 26th.

“I just got to go in there and work on what we’ve been drilling every day in the gym,” said Barrios.

“That’s just me being me, a successful, very dangerous light welterweight fighter. Gervonta has to prove that he can step up two weight classes and step up to this type of competition.

“First things first, I’ve got a huge task in front of me,” said Barrios when asked about his thoughts on potentially taking on undisputed light welterweight champion Josh Taylor in the future.

“If everything goes as we’re planning, I would love a shot at Josh Taylor. He’s a great boxer, and every time he fights, he leaves everything in the ring, and he makes a statement.

“That’s exactly the type of fighter that I would love to share the ring with. Make sure you order the pay-per-view,” said Barrios.

Before scoring a sixth-round knockout victory over the past his prime 32-year-old Leo Santa Cruz last October, Tank was hit quite a bit. It was fortunate for Tank that Santa Cruz is more of a 126-pounder, not a 130-pounder.

He’s new to the super featherweight division, and that was a good thing for Tank because he would have been in trouble if Santa Cruz’s power traveled up with him from 126.

If Barrios can land with the same regularity that both Santa Cruz and Yuriorkis Gamboa both did, he’s got a good chance of knocking Davis out.

Barrios: This dangerous fight for Tank

“It’s going to be a great night of boxing, especially the main event,” said Barrios about his fight card this Saturday. “I know definitely; it’s not going to disappoint. The size difference is pretty crazy for this fight, but we’re going to see how everything plays out.

“I carry my power from round one to round twelve; I’m a dangerous fighter,” Barrios said. “I think there’s a lot of things that have attributed to that.

“Virgil taught me how to work off my jab, how to be patient, how not to rush things that happen in the ring.

“I don’t necessarily have a money shot, but it’s definitely one of my dangerous punches,” Barrios said about his left hook.

“I’ve been able to drop my opponents, whether it’s overhand, hook to the body, hook to the head, an uppercut.

“As I said, I feel like a lot of people overlook the power that I bring in every fight.

Although Tank holds the WBA ‘regular’ 135-lb title at lightweight, he’s only fought once in the division, and that was against 39-year-old Yuriorkis Gamboa in 2019.

For all intents and purposes, Tank is a 130-pounder [super featherweight], and it’s going to be tough on him trying to deal with the size and power of Barrios.

Tank has likely had many sparring with 140-pounders in preparation for this fight, but it’s unlikely that he sparred with anyone as good as Barrios. If they had his talent, they wouldn’t be working as a sparring partner. 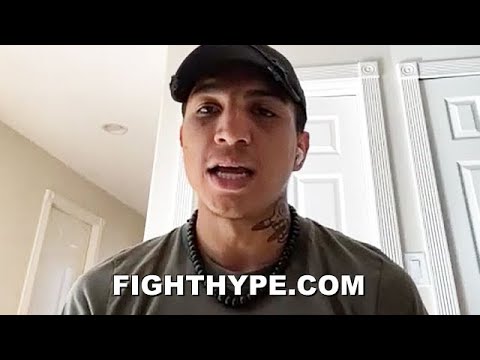