Kambosos on Teofimo Lopez: ‘He’s overhyped’ and a quitter

By Sean Jones: George Kambosos Jr says he’s going to expose the “fake” Teofimo Lopez this Saturday and knock him out within three rounds in their headliner on June 19th on Triller pay-per-view.

To listen to the 27-year-old Aussie Kambosos Jr brag about himself, one would think he’s the champion rather than the other way around.

Kambosos Jr is perhaps one of the most confident fighters that you’ll ever see for a fighter who has accomplished essentially zero during his eight-year professional career.

In Kambosos’ two fights against notable opposition, he struggled to defeat old lions, Mickey Bey and Lee Selby, squeaking by both with split decision wins.

Despite his unyielding self-confidence, he unbeaten IBF mandatory Kambosos Jr is still the underdog going into his clash against IBF/WBA/WBC Franchise/WBO lightweight champion Teofimo.

“I am ready to fight and I know what I’m going to do,” said Kambosos Jr to Fighthub on his clash against Teofimo on Saturday. “My destiny is to be the undisputed champion.

“I don’t listen to him because everything he says is extremely fake,” Kambosos Jr said of Teofimo.

“He’s got different personas. He’ll say one thing and then say something different. So I don’t listen to him too much. People tell me here and there, but I don’t really listen to what he’s saying.

“I do hear he’s fighting 20 different guys than me, so that’s cool. He’s got to deal with this animal, this beast that’s coming at him.

I’m focusing on myself. I never worry about the other people in the fight game. It’s cool. He can talk about whoever he wants to talk about.

I’m focused on him. He can talk about them after he loses his belts. Let’s see if he gets those fights after that, but I’m sure they’ll be coming to the real king after June 19th,” said Kambosos Jr.

You can understand why Teofimo is looking past his fight with Kambosos Jr. The likely reason Teofimo is talking up fights against Devin Haney and Josh Taylor right now is that the U.S boxing public is giving Kambosos Jr no chance of winning, and rightly so.

Moreover, the casual fans have never heard of Kambosos Jr, so they’re not excited about this fight.

With the clash on Triller PPV, Teofimo has to try every trick in the book to attract viewers to his fight with Kambosos.

The best way for Teofimo to accomplish that goal is by name-dropping Haney and Josh Taylor’s names, making the fans think he’s fighting one of them next.

“I know exactly what he throws, I know how basic the guy is,” said Kambosos Jr about Teofimo.

“It wasn’t much in that Lomachenko fight. It was a very basic fight from a guy that didn’t really want to throw anything. When he did, he turned it up, and we saw how vulnerable the kid [Teofimo] looked.

“When we went face-to-face, and I sized him up, yeah, he might have had a bit of muscle, but is this a bodybuilding contest? This is a fight.

“Stamina, fitness, smarts, speed, explosive power, and great footwork, and a great ring IQ are what wins you fights.

“You can have the biggest muscles in the world, and that’s not going to save you. So I’m focused to win the fight by any means necessary, whatever way it is.

“I’m prepared for 50 rounds if it were a 50 round fight, but don’t be surprised if I catch him early and take him out within three. I see the way he comes in, and I know what I’m about.

“My sparring partners and previous opponents know what I bring to the table and how explosive I am. He won’t see it coming, I’ll tell you right now,” said Kambosos Jr in sending a warning to Teofimo.

I wouldn’t say that Teofimo is “overrated,” but he certainly is a weight bully. As big as Teofimo is, he should be fighting at 140 or perhaps 147.

Teofimo walks around as a muscular 160+ lbs, and he’s clearly not a true lightweight.

The only reason Teofimo can get away with draining down to 135 is his youth.

At 23, Teofimo can still get away with draining down massive amounts of water weight to compete in a division much lighter than his natural frame.

Over the years, we’ve seen countless younger fighters take advantage of their ability to drop massive amounts of weight to compete in the lighter weights. But, again, they can only game the system when they’re younger.

Once they get in their late 20s, they can’t do this any longer without draining themselves.

If boxing had its act together, they would have a strict 5-lb rehydration rule set in place to keep fighters rehydrating 15 to 20 lbs overnight after making weight so that they can enjoy a size advantage.

Until then, you’ll have fighters like Teofimo using his size to beat his smaller opponents.

“After the fight, I’ll say, ‘I told you so. You didn’t believe me, and I told you so,'” Kambosos Jr about his belief that he’ll beat Teofimo. 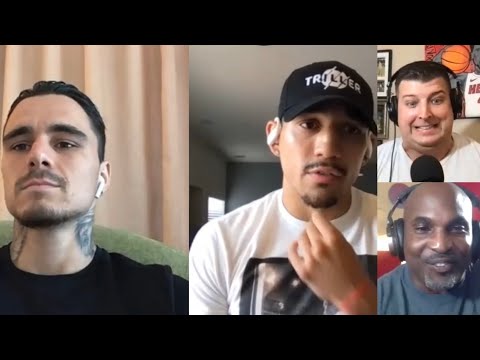 “This was a couple of years ago; I got the footage. When you’re glassy, you’re glassy. It takes a good shot of three and a half pounds right at the perfect spot.

“With the way I’m punching, it’s a hell of a lot more than three and a half pounds. June 19th, it’ll all be said and done.

“I think you can gain a lot from it because the mistakes are still there,” Kambosos Jr about the flaws that Teofimo showed in getting put down in sparring years ago is still present.

“How he got caught in sparring, he’s still making the same mistakes, I’ve seen them. So it’s not really him getting put down.

“It’s what he’s done during the sparring sessions and how he reacted, and he left, and he quit.

“He’s content; I’m far from content. He’s got the belts; And he’s got the millions of dollars; he’s already got the big name.

For Teofimo to quit, Kambosos will have to find some power somewhere because he’s too light of a hitter to get him to give up.

This is a big step down for Teofimo from his recent fights against Vasily Lomachenko, Richard Commey, and Masayoshi Nakatani. However, it’s fair to say that all three of those fighters easily beat Kambosos Jr, even on a bad night.

Kambosos made Teo “lose his mind”

“He [Teofimo] saw it in my eyes too, and that’s why he overrated,” said Kambosos Jr when told that he looks ‘intense.’

“It’s not every time where the mandatory challenger makes the champion lose his mind on stage in front of everyone in his backyard.

“This is his home, the U.S. He takes his shirt off and wants to go face-to-face, and I’m staring him dead in the eyes, and he looks away.

“He’s going to realize that. If he thinks this is an easy fight, no problem. You’re going to be shocked,” said Kambosos Jr about Teofimo.

I must admit, Teofimo did look confused, and a little rattled during his interaction with Kambosos Jr during their kickoff press conference.

It reminded Sean Jones of how a grizzly bear looks confused when a fearless animal approaches it. So likewise, Teofimo was clearly surprised at the fearlessness of Kambosos and seemingly amused and confused at the same time. 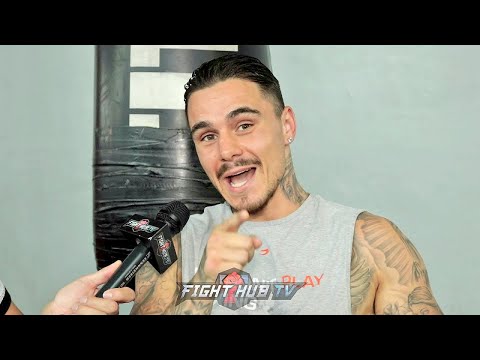 
« Eddie Hearn says “forget about” Joshua – Fury, focus is on Usyk next