Juan Montiel: Jermall Charlo will be sorry if he exchanges punches

By Sean Jones: Juan Macias Montiel 22-4-2, 22 KOs) gave WBC middleweight champion Jermall Charlo (31-0, 22 KOs) an ominous warning that he could be sorry if he chooses to trade punches with him on Saturday night on June 19th in their Showtime clash.

Charlo and #4 WBC Montiel will be fighting at the Toyota Center in Houston, Texas.  Jermall was getting testy during today’s press conference, seemingly angry about the praise that Montiel has been getting about his punching power.

Charlo made it a point to say that he punches hard too, but he sounded insecure as if he needed to remind the media.

Montiel, 27, believes his huge punching power is going to be too much for Charlo, who hasn’t faced anyone like him before as a pro.

Charlo has always stood and traded with his opponents, and he’s gotten away with it because none of the guys he’s faced have had a lot of power until now.

Although Jermall is a heavy favorite due to his pedigree and his advantage in experience, you can’t upset out an upset.

Charlo was getting hit a lot in his last fight against Sergiy Derevyanchenko last September. If Charlo gets hit as often on Saturday, he may fall apart.

“If he wants to trade punches with me, I think he’s going to feel very bad in the end,” said Montiel. “He will feel sorry for that. Against Kirland I was the underdog in that fight, and everybody saw what happened,” said Montiel.

Kirkland obviously has a reputation for having a chin problem, but the shots that Montiel was nailing him with would have knocked out Charlo.

“You think I’m overlooking him? I did not overlook him,” said Jermall Charlo at the final press conference on Thursday in talking about Montiel.

“Let him come at me like he’s thinking. ‘Ah, I’m the underdog.’ You wasn’t the underdog in the Kirkland fight. I knew you were going to knock him out.

He’s done. If you come at me, I’m telling you, I’m like that. June 19th, you get ready, it’s going to be a show. I’m coming to fight. I’m putting everything on the line. My belts, my title, my legacy,” said Charlo.

“You can say what you’re going to say, it’s just going to make me fight even harder. The 22 knockouts that he had, you got to go back and look at his resume.

“He knocked out James Kirkland, he got happy as f***. James Kirkland was done. The other knockouts he had, they were from Mexico and they never fought before.

“This is Jermall Charlo you’re talking to. This is a real fight, this isn’t James Kirkland. Hugo Centeno, I was a draw. I knocked Hugo Centeno out. Think about the past.

“You’re only as good as your last fight. I fought Derevyanchenko in my last fight. He fought Kirkland.

“There are levels, and I get a chance to show the level I’m on this Saturday. I trained very hard for this fight, and I’ll show you. 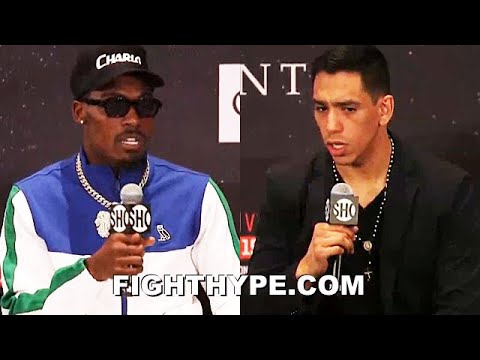