The unbeaten Taylor (18-0, 13 KOs) holds the WBA light welterweight belt that really counts in the eyes of the fans. Barrios WBA belt is a trinket title in Taylor’s eyes, and he views it as a “Mickey Mouse” title.

Taylor doesn’t blame fighters like Barrios and Tank Davis (24-0, 23 KOs) for fighting for secondary titles rather than the real ones.

With that said, Taylor doesn’t like all the trinket belts the sanctioning bodies have come up with, as it confuses the boxing public, making it difficult to know who the real champion is in each weight class.

“Mickey Mouse title. There’s only one champion at light-welterweight,” said Josh Taylor about this Saturday’s Tank vs. Barrios fight in Atlanta. 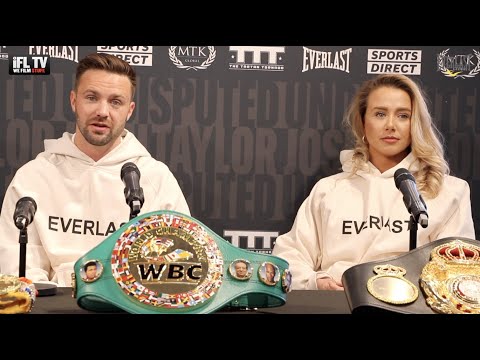 “He’s a good fighter, strong in his division, but I just think he’s a little bit small,” said Josh Taylor about Gervonta Davis.

“But you never know. He could catch me with a good shot, and it’s game over. It’s boxing, as you know. It only takes one punch.

Taylor’s description of Davis fighting Barrios for his WBA “Mickey Mouse title” is about right. The real champion at 140 is Josh Taylor, who has all four belts. Barrios’ WBA ‘regular’ strap is more of an interim strap, if anything. It’s not the real belt.

“The fans should watch this pay-per-view because they’re going to be witnessing greatness,” said Mayweather Promotions CEO Leonard Ellerbe to Jake Asman show.

“You’ve got Gervonta ‘Tank’ Davis, who is the most exciting fighter in the entire sport taking on the young, hungry lion Mario Barrios, who is undefeated.

He’ll be looking to put that blemish on Tank’s record. Mario Barrios has been very adamant that Tank has made a mistake by picking him as an opponent.

“We have a terrific event with Gervonta Davis taking on Mario Barrios,” Ellerbe continued. “It’s two young undefeated champions going at it. Somebody is going to take that L this Saturday night.

“Oftentimes, and I wouldn’t say all media members, but people are going to have their opinions. Believe it or not, there are a lot of narratives in boxing.

“I just don’t fall for that stuff. My kid [Gervonta Davis] is the most exciting fighter in the sport, period,” Ellerbe said.

Davis is one of the exciting fighters in boxing, but it’s impossible to say if he’s the top guy because he’s not fighting good enough opposition.

It’s easy to look exciting when you’re being matched against old-timers like Leo Santa Cruz and Yuriorkis Gamboa.

But it might be a different story if Tank is matched against guys still in their prime like Devin Haney, Teofimo Lopez, and Ryan Garcia.

The only way for Tank to prove that he’s the most exciting fighter in boxing is for him to fight best, and he’s never done that during his career.

You can argue that if Tank Davis dumped Mayweather Promotions and went with a promotional company like Matchroom Boxing, we’d finally get a chance to see how good of a fighter he is.

If Davis stays with Mayweather Promotions for the remainder of his career, what we see on Saturday night with him fighting secondary WBA champion Mario Barrios might be as good as it gets for him.

In other words, it’s all smoke & mirrors with Tank with the way his promoters are matching him carefully.

“That’s something he doesn’t get enough credit for because another example is, he’s never mentioned on the pound-for-pound list,” said Ellerbe about Davis.

“Many people know that when I’ve had that question asked of me, and my response is, ‘I don’t really care for pound-for-pound lists.’

“I’m only concerned with Tank being on the Forbes list. So we’re really excited.

“We’ve got a major pay-per-view event this Saturday night with these two young undefeated warriors [Gervonta Davis vs. Mario Barrios] going at it.

“We have a terrific co-main event with Erickson Lubin taking on Jeison Rosario. That bout right there will have major implications in the 154-lb weight class.

“It’s a terrific fight, and both guys will be looking to make big statements. In Lubin’s case, since his loss to Jermell Charlo, he’s been on a nice run, and he’s put on some great performances.

“And Jeison Rosario, he’s going to be looking to redeem himself. Coming off a loss to Jermell Charlo, he’s going to want to make a big statement in this fight, beating the young, hungry Erickson Lubin.

“I just spoke to his promoter, and he’s had a tremendous training camp. They’re looking to come in and get the job done this Saturday night. That’s going to be a terrific, terrific fight,” said Ellerbe on Lubin.

As long as Ellerbe and Mayweather Promotions keep selecting Tank’s opposition the way they’ve been doing, he’ll make good money during his career.

With that said, Tank will never be high on the Forbes list as far as boxers go because he’s not being put in against top-level fighters.

To make big money in boxing, fighters mostly need to fight the best. Of course, there are exceptions to that rule. Look at Floyd Mayweather Jr.

He is making excellent money fighting non-boxers like Logan Paul and Conor McGregor. But for the most part, boxers must face the best if they want to be ranked high on the Forbes list for the most money.

We haven’t seen that with Tank Davis, thanks to his promoters at Mayweather promotions.

“That’s a process,” said Ellerbe when asked what Tank Davis needs to do for him to get the respect that he deserves.
“I’ve obviously been working with Floyd his entire career. I’m not comparing Floyd with Gervonta, but the same kinds of things happened with him.

“I understand what this process is, and I’ve had some great conversations with Tank about ‘Don’t worry about the media, how they perceive and this and that.

Leonard wants Tank Davis to focus on the opposition that Mayweather Promotions feeds him and not be concerned with his legacy and how fans perceive him.

If Tank had his eyes opened, he should be very concerned about how his promoters are stunting his career by keeping him away from risky opposition.

Yeah, it’s great that Tank is always matched against guys he’s favored to beat, but he’s not the type of opposition that will further his career.

The reason why Tank Davis isn’t on the pound-for-pound lists isn’t that he’s not an excellent fighter. It’s because his promoters are matching him against non-elite fighters.

Tank’s fight this Saturday night against WBA secondary 140-lb champion Mario Barrios is a perfect example of Mayweather Promotions matching him against a lesser fighter.

Instead of matching Tank against the quality guys at 140 like Josh Taylor, Regis Prograis, or Jose Ramirez, they’re putting him in with Barrios, who is viewed as a paper champion. Tank isn’t fighting the right opposition for him to be included on the pound-for-pound lists.

You have to wonder if Ellerbe is deliberately obtuse about why Tank isn’t included on the pound-for-pound lists or if he’s just dense.