Charlo, 31, is a massive favorite to win this fight, but Montiel has the power to beat him if he can land his shots early. Trout feels that this isn’t going to be an easy fight for Charlo, who he thinks might get hurt along the way.

This will be a rough fight, predicts Trout, who sees the match as a war.  Montiel has trained hard for this fight, knowing that it’s his big chance to capture a world title against one of the best if not the best fighters in the middleweight division.

If Montiel can win this fight, it would put him in a position to get a bigger payday in the rematch. Although nothing has been said about whether there’s a rematch clause in the contract, you have to assume that Charlo’s management made sure there was one in there.

Charlo vs. Montiel will be a rough fight

“It’s not going to be a quick night, but I do believe Charlo is going to stop him,” said Austin Trout to Fighthype in analyzing the Jermall vs. Montiel fight.

“I do believe it’s going to be a little bit rougher than anybody expected for a little while, but Charlo is really good at making his adjustments.

“I think I would probably credit that to [trainer] Ronnie Shields. It’s good seeing him. He [Jermall] listens to him real good.

If Jermall comes out swinging against Montiel as he did in his last fight against Sergiy Derevyanchenko, anything is possible.

Derevyanchenko was landing some massive shots on the jaw of Jermall, and it was fortunate for him that the Ukrainian fighter isn’t a big puncher.

If Montiel threw those same shots, Charlo might not be able to take them. Jermall has never been hard to hit because his style is that of a slugger, making him vulnerable.

He’s not as clever as his twin Jermell, who uses his skills to set traps, and isn’t nearly as easy to land on.

“I think Montiel is going to surprise him a little bit,” said Trout. “But as he [Montiel] says, he hasn’t had a camp this long before ever, so you have to understand the fighting form he was in is not going to be the same as he is today.

“But Charlo makes some good points; ‘Your last knockout was Kirkland. He was washed. Don’t think that’s going to be me because there are different levels,’ and Charo is definitely on another level than any of Montiel’s opponents have been on.

“But Montiel showed that he’s on another level as well, so I think it’s going to be a good fight for a while,” Trout said.

Montiel has limited experience as a pro, but he did look exceptional in steamrolling over James Kirkland in one round last December. On a down note, Montiel was held to a 10 round draw by fringe contender Hugo Centeno in December 2019.

Jermall will eventually catch him

“I do think Charlo will catch him at the end,” Trout said. “I do think Montiel hits hard, and I do think he will sting Charlo a little bit.

“We’ve never seen Charlo hurt, but I think he’s going to respect his power a little bit, which is why it’ll take it a little bit longer to stop him,” said Trout.

Montiel is taking a huge step up in class in taking on Charlo, which is why it’s likely he’ll be stopped at some point in the fight. His best chance of beating Charlo is early in the contest with the first four rounds.

If Montiel goes for broke in the first quarter of the fight, he could catch Charlo with a big shot and take him out. Charlo is one of those guys that fight on emotion, and he makes a lot of mistakes. 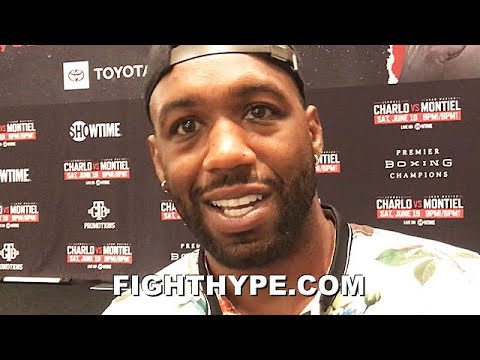