By Brad Slotnick: Floyd Mayweather Jr and YouTuber Logan Paul have agreed to a rule change for their eight-round exhibition match this Sunday with them now wearing 10-ounce gloves instead of the 12-oz gloves that they’d originally been planning on wearing. 12-oz gloves are the ones that fighters use in the heavier weight classes.

With the lighter 10-oz gloves, it’ll increase the chances of a knockout, which is the only way a winner can be determined in the Mayweather vs. Paul fight. There are no judges for the fight, and there won’t be a decision.

Is the Mayweather-Logan winner predetermined?

Despite the change in gloves, boxing fans don’t know if this is a professional wrestling type of fight where the winner is already predetermined with all the action in the match carefully scripted like a theatrical production or if it’s real.

In a sign that the Mayweather-Paul fight will be a scripted bogus professional wrestling style of match, it’s not being sanctioned by the Florida State Athletic Commission.

What further hints at the Mayweather vs. Paul fight being a scripted theater production is the recent episode in which Jake Paul swiped Floyd’s hat off his head during the kickoff press conference, causing a minor melee. Mayweather looked like he was expecting his hat to be taken.

Afterward, Logan spoke to the media, saying that he was afraid for his safety because Mayweather had said he was going to kill Jake while he was chasing him to get his cap back.

If Logan can make it the full eight rounds, it’s a win-win for him, as there’s no chance of him losing, even if he gets dominated during the fight.

The much bigger fighter Logan was vowing to break the 44-year-old Mayweather down mentally during Wednesday’s media workout. It was hard to take Logan seriously, though, as he looked incredibly amateurish when he was working out.

Moreover, the way that Logan was huffing and puffing while shadowboxing around the ring, indicates that his stamina hasn’t improved since his pro debut against fellow YouTuber KSI in 2019.

In that fight, Logan gassed out after two rounds and looked like he was in need of oxygen from rounds 3 through 6. In fact, Logan was in a state of exhaustion after the first round, and he looked terrible.

“I’m going to play with Floyd, gonna dog him and hit him hard,” Logan Paul said on Wednesday. “I’m going to break him down physically, mentally, everything.” 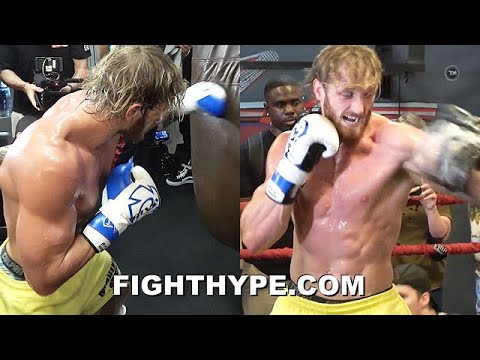 Mayweather has already said it himself that his fight with Logan is “entertainment,” and Leonard Ellerbe has backed him up on this. This isn’t a sporting fight in the classical sense.

It’s mindless entertainment, and hopefully, the fight looks authentic and not like the recent Mike Tyson vs. Roy Jones Jr exhibition. That match looked fake from start to finish, and it was disappointing to watch.