By William Lloyd: Anthony Joshua has found a southpaw heavyweight, Thomas Carty, to use as a sparring partner to help him prepare for the slick Oleksandr Usyk for their fight in September. at the Tottenham Hotspur Stadium in London.

Unfortunately for IBF/WBA/WBO heavyweight champion Joshua (24-1, 22 KOs), there aren’t many southpaw heavyweights out there that can mimic the fighting style of the 2012 Olympic gold medalist. Carty might be as good as it gets for him.

Joshua is taking this fight because his original opponent Tyson Fury is being forced to fight a rematch with former WBC champion Deontay Wilder after losing his arbitration case.

If Joshua gets past Usyk, he’ll then face the winner of the Fury vs. Wilder III fight. AJ would likely prefer to face Fury (30-0-1, 21 KOs) because it’s a bigger money fight, but he’ll gladly agree to face Wilder (42-1-1, 41 KOs) if the match can get negotiatiated.

The Irish heavyweight Carty is 1-0 as a professional, having recently beaten Richard Pkhakadze by a four-round decision in his pro debut on May 29th/

“I am left-handed and I’m light on my feet, I utilize a lot of movement, so I naturally emulate Usyk,” Carty told Sky Sports.

“AJ is a gent, he’s a normal bloke, nothing crazy. He’s the heavyweight champion but he’s just an average bloke. A really nice fella. I have the same goals. Iron sharpens iron.”

“It makes me stand out. I’m a young, Irish, southpaw heavyweight – there are no others!” said Carty.

Most boxing fans believe that the 6’6″ Joshua beat Usyk just on the size as alone, as long as he doesn’t get sloppy put his chin on the line as he did against Andy Ruiz Jr in their first fight.

“I think Usyk is a real heavyweight, he can punch, he can box, and he can bring the pain,” said Andre Dirrell to Fighthype. “Anthony Joshua has incredible power and he definitely has skills.

“He’s a technical fighter,” Dirrell continued about Joshua. “When I say that, he throws the cleanest 1-2-3 in boxing. When it comes to pure boxing ability, Joshua has that. He knows how to throw a punch from the shoulder; he turns the hook over. 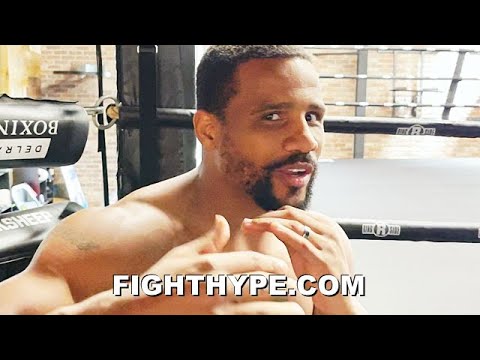 Vasily Lomachenko returns this Saturday against Masayoshi Nakatani on Espn »