By Scott Gilfoid: Tyson Fury seems to be stuck in the past this week in reliving the memories of his victory against Deontay Wilder last year.

This week in Arlington, Texas, WBC heavyweight champion Fury (30-0-1, 21 KOs) has sounded like a broken record with the number of times he’s brought Wilder’s name up when doing interviews.

Fury been using his foul-plagued victory over former WBC champion Wilder (42-1-1, 41 KOs) as a tool to validate him in the eyes of the American media and boxing fans.

Fury says Wilder’s soul is his

“I always have said I fancy Deontay Wilder to knock Anthony Joshua out in one to two rounds,” said Fury to the media on Friday. “It depends.

“If I decide to ever give Deontay his mojo back, he might be able to box again,” Fury continued. “But until then, his soul, his mojo, and his balls are all in my pocket. I own them.”

By Fury putting Wilder in the category of fighters capable of knocking out Joshua, he’s vaulting himself up to a higher perch due to his knockout victory over the talented American. It’s pathetic for Fury to take this angle to raise his stature, but it shows the void in his self-confidence.

The way Fury has talked incessantly about his win over Wilder gives an insight into his mindset, showing that might not have thought he was going to win that fight going into it. Who can blame him, though? 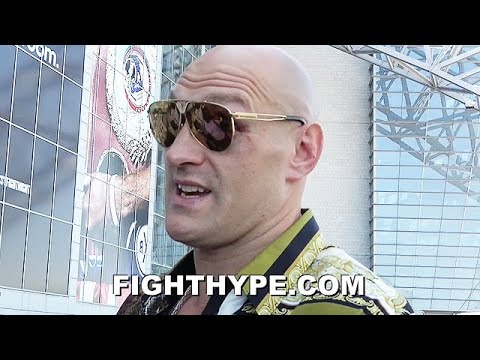 Fury is a textbook example of a fighter living off the laurels of one victory and not getting off his duff to get back in there to prove himself again in a trilogy match with Deontay.

Living off an aging memory is exactly what Fury did after his win over Wladimir Klitschko in 2015.

Really, history is repeating itself with Fury sitting on his backside, flapping his gums about his win over Wilder in the same way he did after his mind-numbing boring 12 round win over the over-the-hill Wladimir six years ago in Germany.

Fury is making the same mistake by getting his backside stuck in neutral and not moving his career forward. Perhaps it’s fear of failure that keeps Fury from trying to prove himself again by facing Wilder a third time.

Let’s face it; Wilder literally knocked Fury out cold in the 12th round in their 2018 fight and was arguably robbed of a KO victory.

With the dire condition Fury was in after Wilder blasted him to the canvas was a beautiful right-left combination, that contest should have been stopped on the spot by the referee that worked the fight, Jack Reiss.

Why he didn’t stop the fight is the magic question. Would have he have halted the bout if Wilder was the one that was dropped? Some believe he would have.

Canelo vs. Saunders: Billy Joe is 100% live in this fight – says Eddie Hearn »