By Dan Ambrose: Tim Bradley favors Errol Spence Jr to defeat Manny Pacquiao on August 21st when they meet in Las Vegas, Nevada. Pacquiao (62-7-2, 39 KOs) announced his fight with IBF/WBC welterweight champion on Friday by posting a poster promo on his Instagram.

Bradley is well familiar with the 42-year-old Pacquiao, having fought him three times during his career. At this point in Pacquiao’s career, Bradley questions how much he has left.

Pacquiao had many problems beating Keith Thurman by a 12 round split decision in his last fight. Thurman is someone that Spence would likely break down and annihilate in a workman-like fashion.

There is one flaw that Bradley feels that Pacquiao can take advantage of with Spence. That’s his habit of returning to the center of the ring each time.

Bradley feels that Pacquiao would do well attacking Spence if he keeps going to the ring center, but you never know.

“Listen, you can never count out Manny Pacquiao, he’s a tough guy,” said Tim Bradley to iFL TV in reacting to Pacquiao announcing his next fight against Spence.

“Even at 42-years-old, he’s the Tom Brady of boxing. I’m just not sure how much he has left. It’s been two years that he’s been out of the ring since Thurman.

‘I don’t know what he’s been doing. It could be his time. Maybe he could rise again. Errol Spence is a different cat. He’s not a Keith Thurman. Errol is big, he’s strong, he’s long.

“A consistent jab, he knows how to gauge distance and control distance. There’s one thing that he does that could affect him in the fight [with Pacquiao].

“He tends to come back. He’ll work and then come back to the center. Manny Pacquiao, he loves guys that come right back in the center in the line of fire so that way he can land his straight left hand,” Bradley said.

Pacquiao will have a hard time getting close enough to Spence for him to land his shots.

The jab that Spence used against the 5’6″ Mikey Garcia will make it really difficult for Pacquiao to land anything against him. This fight could be a shutout like Spence’s fight against Mikey.

Spence’s volume will cause Pacquiao problems

“Manny has seen it all, but I don’t think he’s seen a southpaw as big and as active before and is smart,” said Bradley. “There’s always a danger when you’re in the ring with Manny Pacquiao because the power is the last thing that leaves you.

“Manny does still have some speed, and he’s fluid with his combinations. The backend of the fight is going to be really interesting because Spence doesn’t get tired.

“He keeps coming and his volume and work and power that he brings, it wears on you. It’s a great fight. I would favor Spence in the fight, but you never count Manny out.

“The speed will create opportunities for Manny. He’s quick and he closes the distance extremely fast. Meaning he’ll be here one minute and then here within a blind of an eye.

“Spence, knowing how disciplined he is, he keeps his hands up and he’s tight with it, he should be able to control distance,” said Bradley.

The combination of Spence’s heavy hands, size, work rate, youth, jab, and ring IQ will give Pacquiao fits. Spence isn’t the type of guy that you want to fight coming off a two-year layoff. 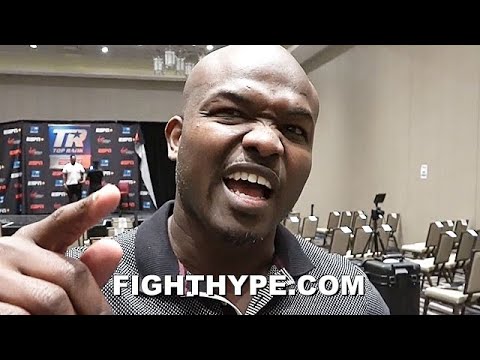