McGirt: If Canelo figures Saunders out, it’s over with

By Dan Ambrose: Trainer Buddy McGirt feels that Billy Joe Saunders will need to stay focused for the entire 12 rounds against Canelo Alvarez for him to have a shot at pulling off the upset victory on Saturday night.

McGirt says if Canelo (55-1-2, 37 KOs) figures Saunders (30-0, 14 KOs) to solve the puzzle he presents inside the ring, it’ll be over. The fight will be interesting as long as Saunders keeps Canelo guessing, but if he figures out what he’s doing, it’ll be a wrap.

Canelo will knock Saunders out and go home with his WBO title on Saturday night at the AT&T Stadium in Arlington, Texas. It’s going to be very difficult for Saunders, 31, to stay mentally aged for three minutes of every round, as he tends to get lazy.

Moreover, Saunders has stamina problems that kick in after six rounds each time he fights, and that’s something he’s always had. You can’t imagine Saunder’s strength getting better as he ages.

It’s a good idea that Saunders focuses on jabbing and moving for the entire fight to avoid becoming another Amir Khan on the night.

We all remember how the defensive-minded Khan was knocked cold by a single right-hand counter from Canelo in the sixth round in their fight in June 2016.

Saunders will get stopped if he loses his focus

“I think it’s going to be pretty interesting for as long as Saunders keeps Canelo out of rhythm, but once Canelo figures you out, it’s a wrap,” McGirt said to DAZN’s Boxing Show.

“If he can sustain that for 15 rounds, not 12, that’s the kind of frame of mind he’s got to be in for 15 rounds; If he loses focus one second and lets Canelo get in the groove, it’s over,” said McGirt about Saunders.

This could end badly for Saunders if Canelo figures him out and lands something. It’s not just a case of Saunders losing his concentration. It’s more about Canelo negating all the things Saunders will be trying to do inside the ring.

Running only works up to a point in fights. Sooner or later, Saunders will be there to be hit when he tries to land his own shots. He can’t just run all night and embarrass himself in front of the 70,000 fans at the AT&T Stadium.

If Saunders had excellent stamina, you’d have to give a great shot at winning the fight on Saturday. Billy Joe an outstanding fighter when he’s at full strength, moving around and befuddling his opponents.

It’s been perhaps too easy for Saunders to win most of his fights since 2014, but that’s because his promoters haven’t taken any chances with him.

They’ve chosen to make sure Saunders kept winning by matching him against fighters like David Lemieux, Willie Monroe, and Charles Adamu.

That match-making paid off because Saunders is now getting a whopping $7 million payday against Canelo on Saturday night.

But when you cut corners by making a higher only against second-tier opposition, they’re usually not ready when you step them up against elite-level fighters.

“If Billy Joe is asking for a specific size of ring or if he demanded that in his early contract negotiations, if he wanted a 22-foot ring, that leads me to believe he wants to box, use the entire ring and move around,” said Mikey Garcia to Little Giant Boxing. 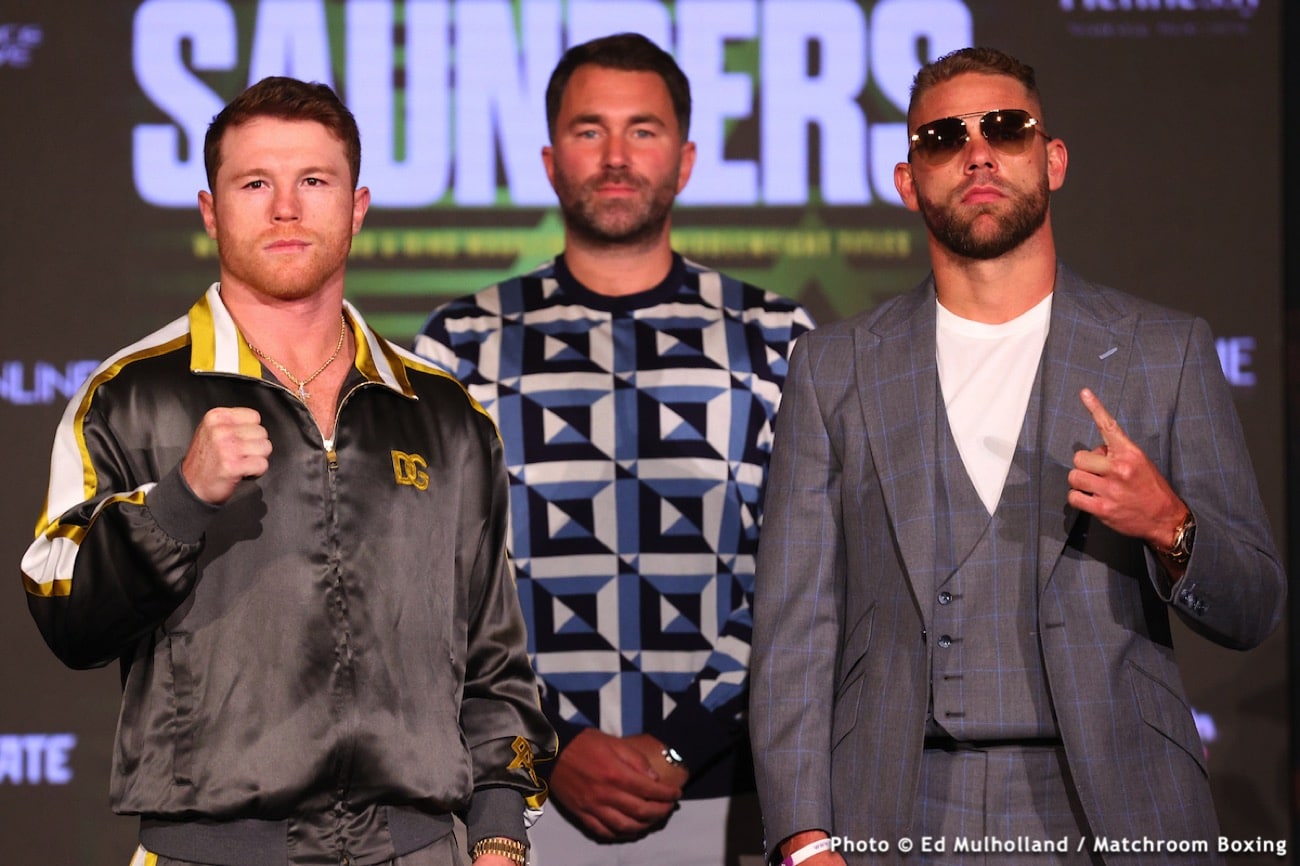 So I think the first half will be a little interesting, but I think Canelo figures out what to do, picks up the pace, and starts to build a bigger lead, close the gap, close the distance, and cuts corners.

“I think Canelo wins, but I think it’ll be a pretty competitive first half of the fight,” said Mikey.

Saunders may squeak out a couple of rounds early on, but maybe not. With Canelo landing the much harder, cleaner shots, Saunders will be difficult to win rounds if he’s jabbing and throwing backhand punches.