Charlo has established himself as a force in two divisions and will seek to thrill his hometown crowd against Mexico’s Montiel in a first-of-its-kind Juneteenth Day boxing celebration. Charlo will fight in Houston for the fourth time as a pro and look to keep his undefeated record intact against the upset-minded Montiel.

Here is what Charlo, Montiel, and their trainers had to say Tuesday:

“June 19, it’s going to be fireworks. A parade. A celebration. Me and Ronnie Shields get a chance to do it again. I’m working hard. I was working hard before I even knew who Montiel was.

This time, you get a chance to see all the hard work I’ve put in for so many years. It’s a dream come true to be able to fight in my city, and I get a chance to do it with a crowd. Tune in and get your tickets because it’s going to be a great night of boxing.

“There’s no better day to fight than Juneteenth. It’s a celebration for me and my people, and I get to represent them and carry them on my back. To be able to do it for my city right here at the Toyota Center – it’s going to be an amazing night of boxing.

“Montiel is fearless. He’s a fighter that I think deserves a chance. At this point, he understands where he’s at. This is a big fight. A lot of people may not know who Montiel is, just like I didn’t, but he’s a strong fighter. The people want to see me get tested, right? I want to see those big fights, too. In a matter of time, they’ll come. But Montiel should be a good fight.

“I’m going to whoop his ass. He doesn’t stand a chance. They’re all confident. I got the belt. The belt ain’t going nowhere. Toyota Center, get ready. It’s going to be fireworks on June 19. He can be as confident as he wants, but when we get in there, he’s going to have to figure it out.

“A fighter like Montiel is challenging to go in there and get the job done real clean and swiftly because if I look bad against a guy like this, they’ll take away from what I did in the Derevyanchenko fight. But, yes, to date, Derevyanchenko was one of my hardest fights, but I made nice work of it and onto the next one.

“I got the belt. Champions fight champions. We unify. But if not, we’re not just going to sit back. Those guys that have the belt like Triple G, Canelo, and Andrade – the belts are out there, so eventually, it will happen. I’m not in a rush. I’m young. I’m still having fun. I’m enjoying what I do best.

“We are focused on preparing as well as possible. This is a once-in-a-lifetime opportunity, and we are taking it as such with a lot of dedication and discipline. We are ready to put on a great show on June 19.

“This is the fight I always dreamed of. I am all about challenging myself and fighting against the best of the best. I have been training hard, and I believe in myself. I will be ready to come out and win.

“We’re fighting in Houston because I don’t think that I’m in a position to choose or dictate anything right now. I will fight anywhere in order to make my dream of becoming a champion come true. If we have to fight on the moon, then let’s fight on the moon.

“I believe that power is the great equalizer, a legit advantage in boxing since it can change the fortunes of any fighter inside the ring. I consider my power advantage in my favor.

“I have fought and prepared so hard for the opportunity to go and get this championship belt. I have done things the right way. There is no reason for things to go wrong. As I said previously, I am not in a position to choose where to fight. I just have to keep training hard like I have since I was four years old.

“I’m happy that there will be fans in the stands. I don’t feel any pressure because it’s all about Latin pride and support, and that motivates me.

“I think Charlo is a great fighter, super talented, and the world champion for a reason. I have been preparing my whole life for this. 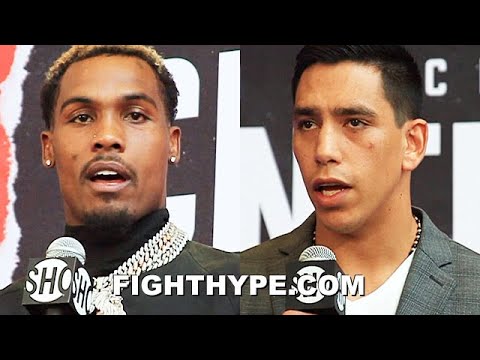 “I don’t think that all Mexicans just go on attack mode by default. You also have to be smart and think things through depending on how the fight goes.”

“Jermall Charlo has worked his butt off in the gym, and he continues to do that. To defend your title in your backyard, in your hometown, that’s a very special thing.

Montiel is a really great fighter, and we know we can’t underestimate anybody. We’re going to be in the best condition we’ve ever been in every time we fight, and we’re going to continue to do that. We’re looking forward to having everybody come out for this great celebration.

“Training camp is an ongoing process. Things are going swimmingly, just like we wanted them to. We are very happy and so glad people have welcomed us here in Houston with open arms.

“I’m hoping for Montiel to be in his best physical, mental, and emotional shape to come out with a win on June 19. Our biggest advantage right now is that we are already settled in here in the United States, free of the distractions and temptations we might have back home in Mexico.

“I think that a victory of this magnitude would make Montiel the face of Mexican boxing, rubbing elbows with the Canelos of the world. Life would change overnight for him.”

“We welcome SHOWTIME and our friends from Premier Boxing Champions back to Toyota Center. We have a great history of hosting combat sports in this fine arena.

We’re really excited about what Jermall Charlo and Juan Macías Montiel are going to bring to the Toyota Center on June 19.

Tickets are on sale now at toyotacenter.com, and we are looking forward to a great night as we bring back live events to this market. We can do it successfully and safely, and we want to see everybody come and see a great championship boxing match.”