Eddie Hearn gloating about Joshua vs. Fury getting done

By Charles Brun: Matchroom Boxing promoter Eddie Hearn was doing some gloating on Monday over the work he put in to get the Anthony Joshua vs. Tyson Fury fight done. Hearn really enjoying playing the old, ‘I told you so’ bit now that the fight is on the precipice of being done.

Many people doubted that Hearn could get it done, and he’s relishing being able to brag about his accomplishing what fans thought was impossible.

Although the fight still isn’t 100% official yet, it’s expected to be done possibly this week. It’ll be fun to see Hearn backtrack if the Fury vs. Deontay Wilder arbitration hearing implodes the Joshua-Fury fight entirely.

“I told everybody this fight would be done. No one believed me, ‘Oh, it won’t be happening, it’s a bad time, they won’t come up with the money,'” said a gleeful Hearn to DAZN Boxing.

“I’m not looking for props, but give me some f***ing props!”

Oh boy, this is what I was afraid of. Hearn is going overboard, wanting to be praised because he got the Joshua-Fury fight over the line. Man, I hope he’s not unbearable during the build-up to fight, reminding the media that he’s the one that did the impossible.

If things go sour all of a sudden with the arbitration hearing sinking the Joshua – Fury fight, Hearn may be crying big crocodile tears as all his hard work goes up in smoke.

In other news on the Joshua-Fury front, Hearn says that he’s assembling a “Great undercard” for the August 14th event in Saudi Arabia. Hearn is planning on putting together three world title fights for the undercard.

“I look it as a 50-50 fight because of the time that has expired in between,” said trainer Virgil Hunter to iFL TV on the Joshua vs. Fury fight.

“When you have that much time that has elapsed between the last fight, it’s hard to pick a winner. Physically, you can look at AJ as a possible winner.

“Mentally, Fury always seems to stand above the competition mentally with his ability to play mind games, which is a very powerful weapon.

“So I think AJ is going to have to keep his head on straight and not subject himself to Tyson Fury’s ability to mentally control the environment,” said Hunter.

Time to take back what I never lost.

Every belt there all mine chump! pic.twitter.com/nBDYizOlGX

If Joshua can handle the bizarre way that Fury fights on the night, he’ll have an excellent chance of beating him. But Joshua will need to be ready for Fury using all kinds of unorthodox moves inside the ring to try and confuse him.

“Fury will have to be ready for Joshua’s physical qualities and gifts in the ring,” said Hunter. “Both are gifted and true champions, so right now, I classify it as a 50-50 fight.

“It’s definitely about supremacy. Whoever wins will be on the top of the world and the shot-caller of the division.

“Hey, they’re going to make a ton of money and have bragging right, which is a big thing in the heavyweight division. So more to come.

“It has dragged on to the point where you say, ‘Come on with a date.’ You would like to have fans to bring that atmosphere and that quality to the fight.

“I’m sure the fighters would like it to feed off the crowd,” said Hunter on the Joshua vs. Fury fight. 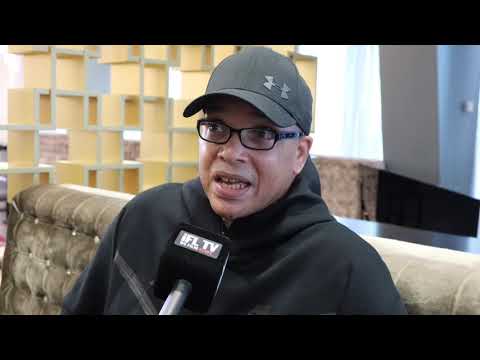 Joshua Buatsi one fight away from Dimitry Bivol title shot »