By Charles Brun: Conor Benn (18-0, 12 KOs) will be fighting next on July 31st for the EBU welterweight title against a still-to-be-determined opponent. Benn, 24, won’t be fighting David Avanesyan, as he’s vacating the belt.

Instead of Benn, Eddie Hearn of Matchroom Boxing wants to get Amir Khan to take the fight, but it doesn’t seem probable that he’ll say ‘yes’ to a fight against Benn.

The best way to increase Benn’s popularity overnight to ake him a star quickly would be for Hearn to get Khan as his opponent. It’s going to be impossible to get Khan to agree to face Benn, especially after the way he took out Samuel Vargas.

“So what I was saying about European titles and stuff like that; we tried everything to get Chris Jenkins, and I know it’s not his fault,” said Eddie Hearn to iFL TV about Conor Benn. 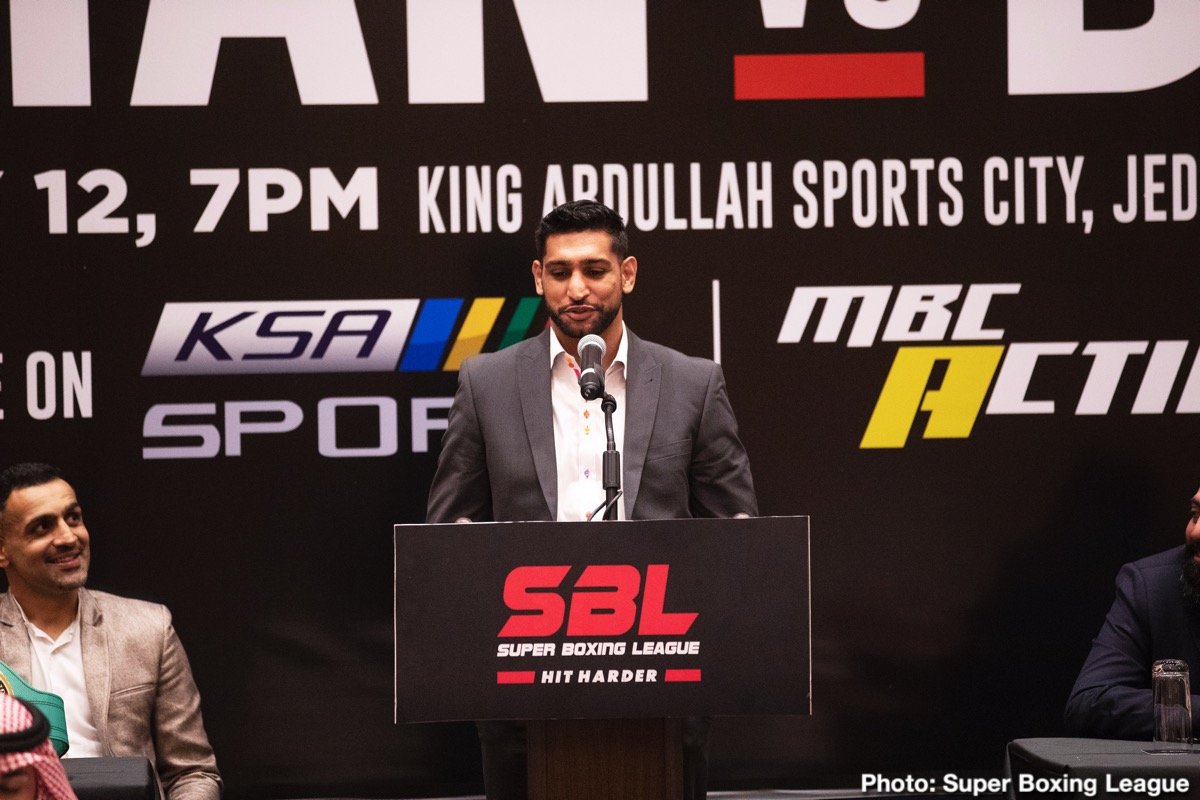 “We’re done with the British [welterweight title] because he’s above that. I would still like to see him win the European title.

“I know everyone is getting mad and carried away because his [Conor Benn] performances are so good and he’s looking so good. And I want to see him do some more championship rounds, and then I want a big, big fight for him at the end of the year.

“And I know Amir Khan and guys like that have been discussed. I also want to take him to America. I’d like for him to box in Mexico. There’s so much to do, but he’s a very driven young man.

“He wants to move at a pace, but ultimately for me, I’m told what to do by Tony because if it were up to me, we’d all get carried away. Tony knows him better than anyone.

“It’s all about money,” said Hearn when asked about the possibility of Amir Khan fighting Benn. “Conor explained the situation very well.

“This is the Scouse Al Haymon,” said Hearn about Tony Bellew. “Amir has everything to lose in that fight [with Benn], do you know what I mean?”

If Hearn wants former IBF/WBA light welterweight champion Amir Khan to agree to fight Benn, he will need to throw the same big money that he would get in a fight with Kell Brook.

Khan will obviously know how much risk involved against Benn, and he won’t come cheap.

Bellew warns Benn to slow down

“Yes, he does,” said Bellew about Khan having a lot to lose against Benn. “But he [Benn] has a lot to lose because you’re a growing name with a brilliant reputation.

“If you go in there with him [Khan], it’s a Catch 22, because if you smoke him and do him in a couple of rounds, everyone is going to go, ‘He’s shot.’

“And then if he beats you, everyone is going to go, ‘He’s all hype and smoke.’ So you can’t win. The only thing you can win is a few quid,” said Bellew to Conor Benn.

“There’s nothing wrong with that,” said a laughing Benn about the idea of making a “few quid” off fighting Khan. “They’re saying, ‘Yeah, he’s shot,’ but my bank account ain’t shot.”

“But yeah, it’s going to come,” said Bellew about Benn likely to make a lot of money in his career.

“Obviously, the self-belief and the confidence of me knocking Amir Khan out, I’ll take that,” said Benn.

“With the way you’re punching, you could knock any middleweight out,” said Bellew to Conor Benn. ‘When it comes to guys like Shawn Porter, I would just say, ‘Why do you need to rush?’ How simple is that?” said Bellew.

Benn is in too much of a hurry to make money, and he may not realize how much danger there is for him. He’s not that far removed from his fights against Cedrick Peynaud in 2018. A lot of boxing fans felt that Benn deserved a loss against Peynaud.

Fight Porter if the money is ridiculous

“If someone said to your tomorrow and goes, ‘Conor, there’s an IBF title fight against Shawn Porter.’ If it was me, I’d say, ‘How much?'” said Bellew.

The money is going to come. You’re going to get money. You got an amazing team around you. Let them do their job, and you just fight and keep winning.

You’re going to get to the stage where you’re going to make the decisions, but right now just keep winning. It’s all coming to you.

You’re dangerous now, and you’d be surprised how many people will go, ‘I’m not too sure about that.’ I remember when the list was long, everyone wanted to fight Conor Benn. The list is short now,” said Bellew.

It makes sense what Bellew says about only fighting a guy like Shawn Porter if the money is ridiculous, but he probably won’t be at this early stage in his career.

When Benn starts making big money, Porter will likely be retired by that time. Right now, Porter would be a difficult match-up for Benn, as he couldn’t count on getting a premature referee stoppage as we saw in the Samuel Vargas fight.

After that episode, Porter likely wouldn’t agree to fight Benn in the UK out of worry that a referee would stop the fight at a moment’s notice if Conor flurried.

“Hopefully, we get this European title next, which we’re looking at, fighting on July 31st,” said Benn. “I’ll do the damage, and then we’re on the way to a few M’s [millions] in the bank account.”

“Mate, the money is going to come, I promise you,” said Bellew. “You have all the ability, and more than the ability, you have the attitude.

“You have the desire and the attitude,” said Bellew to Conor Benn. “I’m telling you right now, that’s what won me the world title. I never had the athletic ability like you. And I was never a good athlete. I was just insanely driven,” said Bellew.

It would mean something if Benn were fighting David Avanesyan while he held the EBU 147-lb title, but he’s vacating the belt.

It’s not as big a deal knowing that Benn will be fighting for the vacant EBU title against one of these fighters:

Khan could be a problem for Conor in later rounds

“Mate, he [Benn] hits anyone with eight-ounce gloves something is going to go on their backside,” Bellew said when asked how Conor would do against Amir Khan.

“Amir is no different than anyone else, but at the same time, you got to think, what happens if he goes past eight, nine rounds with Amir?

“Believe me; I’ve known Amir since GB days. He is the quickest kid I have ever seen. He’s that quick. He’s not what he was then because he’s long in the tooth,” said Bellew.

“You said, ‘what would happen if it went past round nine?’ I’d match it,” said Benn. “What do you mean you don’t know what I’d do in rounds eight and nine. I’d match it, and I’m going to bring it to him [Khan],” said Benn.

“We haven’t seen that yet,” said Bellew in checking Benn about his boasts. “I believe you because you’re so driven, but it’s only a matter of time.

“Don’t rush, don’t let anyone rush you. The fighters need protection from themselves, I swear to God. I’ll bet you he goes all the way,” said Bellew.

“I’ll let my fists do the talking,” said Benn. “European title next, let’s have it. Whoever wants it can get it.”

Benn didn’t appear to be all that interested in hearing Bellew tell him to pump the brakes with his career about fights with Shawn Porter and Khan.

The win for Benn over Samuel Vargas may have given him a sense of invincibility, and his bubble could get burst if he’s matched against someone a little too good like Porter. At this point, even Khan, 34, might be a step too far for Benn. 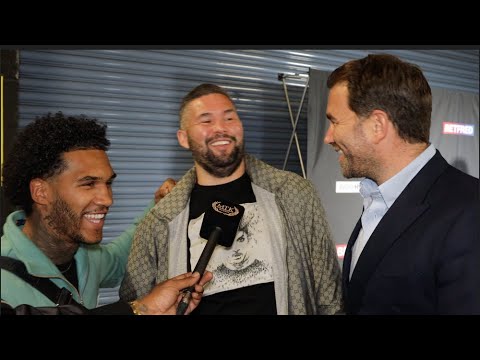 Canelo Alvarez: ‘I will love to fight in England, it’s a dream’ »