By Sean Jones: Carl Froch says he can’t see a way for Billy Joe Saunders to pull off an upset on Saturday night in his unification match against Canelo Alvarez at the AT&T Stadium in Arlington, Texas.

‘The Cobra’ Froch believes that WBO super middleweight champion Saunders (30-0, 14 KOs) is really up against it in taking on WBA/WBC champ Canelo (55-1-2, 37 KOs) at this point in his career.

Canelo, 30, is firing on all eight cylinders since his close call in his rematch with Gennadiy Golovkin in 2018, and he looks unbeatable.

The fighters Canelo has been hand-picking are guys that he knows with 100% certainty that he can beat. Saunders, 31, has obviously been well-scouted by Canelo and his trainer Eddy Reynoso and deemed a non-threat. The fighters that Canelo is seemingly avoiding right now are these guys:

Those are guys that Canelo should be fighting because the U.S boxing public much prefers to see him face those fighters than Saunders, who has a resume that is barren of quality opposition.

“Without being too cutthroat and straight to the fight, I think Canelo wins the fight,” said Carl Froch to Macklin’s Take in predicting Alvarez to beat Saunders.

“I can’t make a case for Canelo losing, not just to Billy Joe Saunders, but to anyone in those weight divisions around super welterweight.

“I know he’s up from there now. Middleweight, super middleweight, and light heavyweight, I make a case giving him a fight. That’s why I think he dropped down after beating a faded [Sergey] Kovalev.

“Around the super middleweight and middleweight area, I think he’s [Canelo] a dangerous force. He’s beaten everyone put in front of him. He had a great fight with Mayweather twice.

“He [Canelo] fought GGG twice. So he’s been in with the best of the best and fell short once. The fights with GGG were close. He could have lost one of them, but he didn’t.

“He got the decision. So the only loss on his record is Mayweather. Billy Joe Saunders, he’s a great fighter; he’s got fast hands, he knows how to box. He’s skillful, he doesn’t get credit for his skill, or maybe he does.

“He’s good on his feet, and he’s got good ring craftsmanship, but I just don’t think he’s good enough for Canelo. He’s not big enough or strong enough,” said Froch about Saunders.

Froch is making the logical choice in choosing Canelo to win this fight, seeing that Saunders doesn’t have the speed, power, or the boxing pedigree to win.

Saunders has looked good against the limited opposition he’s faced in his career, but he’s been matched carefully. Billy Joe has never fought anyone like Canelo before, and you can’t call his last opponent, 38-year-old Martin Murray, as a proper step up. 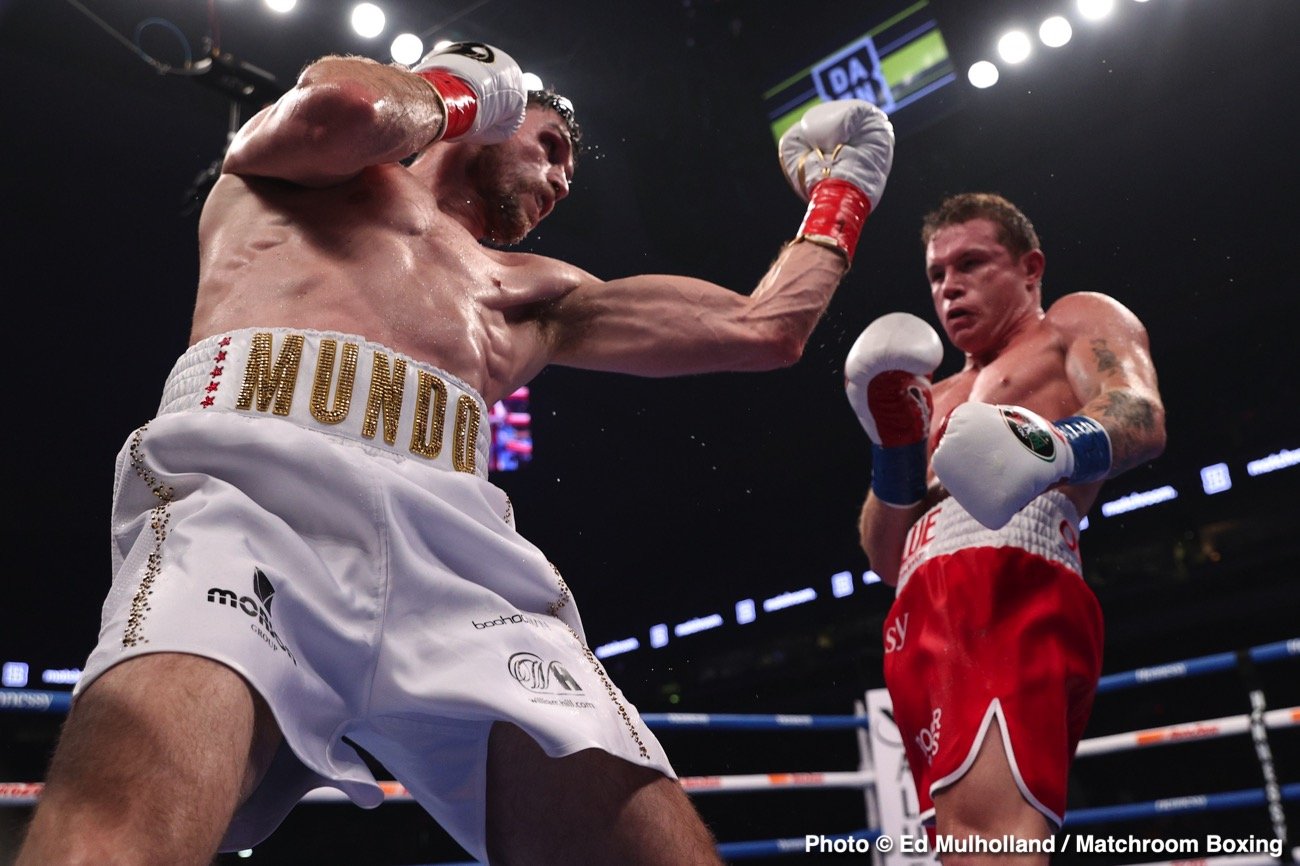 “I know he won the fight against Chris Eubank Jr, but there are levels to this game. It’s nothing against Billy Joe.

“He’s a world champion in his own right, and he’s a top fighter, but Canelo, for me, he stands out from the rest of them.

“He’s going to be really, really difficult to beat, and as you say, he’s getting better and better. I just can’t see Billy Joe derailing him.

“Can you see Billy Joe Saunders out-boxing and outworking Canelo? It’s hard to hit Canelo with a jab.

“His defense is brilliant with his gloves, his counter-punching is really, really good, he’s exceptional, and he bangs hard, and he’s a tough mother f****.

“He can take a shot; you can’t hurt him. I can’t see Billy Joe [hurting Canelo], and I like Billy Joe, but I’m really honest.

“I think he’s getting beaten, I really do. But I’m not saying it’s a mismatch or it’ll be one-sided. I think he’ll give him a fight. It’s going to be entertaining and interesting,” Froch said.

Billy Joe is going to try and outbox Canelo, but it’s going to fail miserably. Saunders couldn’t even outbox Marcelo Esteban Coceres in 2019, and that guy is nowhere near as good as Canelo.

The only way Saunders beats Canelo at the AT&T Stadium on Saturday night is if he breaks character and comes in as a slugger, which will take the Mexican star by surprise.

If Saunders comes out slugging, he might catch Canelo with something big early and then take him out. What does Saunders have to lose? He’s clearly not going to outbox Canelo, so he might as well go for broke and fight like a warrior.

“I hope Billy Joe doesn’t get done; I hope he doesn’t get ironed out,” continued Froch. “We’ve seen Amir Khan get absolutely flattened.

“He looked like he’d been shot by a sniper in the audience, down he went, gone. Amir Khan was flat on his back, out cold. I don’t think that’s going to happen to Billy Joe, but in a distance fight, I still see Canelo winning.

“I’m hoping Billy has the night of his life, puts it on him, gives us a show, entertains us, and somehow comes out with a verdict, I really do. How great would that be? It would be fantastic, actually.

“[Daniel] Jacobs found it really difficult to land a jab in the fight,” said Froch about Canelo’s win over Danny Jacobs in 2019,” said Froch.

It’s safe to say that if Saunders tries to win the fight by opening up with his offense, he’ll get knocked out for sure. But if he follows the Mayweather blueprint and stays on the outside, he’ll likely survive the full 12 rounds but lose the fight.

With 70,000 Canelo fans attending the fight on Saturday, it’s highly doubtful the judges will want to create a riot by giving Saunders a decision win if he spoils and fights defensively.

If Saunders wants a win over Canelo, he’s going to need to earn it the hard way by beating him in an old-fashioned shoot-out. That’s not Saunders’ style of fighting, sadly.

I don’t think Saunders can fight like that, and if he does, it could be curtains for him by the third or fourth round. We saw what Canelo did to Avni Yildirim, and Saunders’s punch resistance isn’t any better than his.

Alvarez is difficult to hit cleanly

“It was so impressive. I thought Canelo was going on a little bit towards the end of his career on the slide after the GGG fights.

“But then he comes back and puts the performances in, and you think, ‘This guy is good.’ As Andy said, he seems to be getting better and better.

“Unfortunately, for Billy Joe, he’s up against it. It’s tough for Billy Joe. I can’t see him getting done, can you? 100%, I think he’ll be competitive.

“I got a 10-hour flight to go see him [Saunders vs. Canelo]. It better be competitive, or I’ll be having a word with him after,” said Froch.

The only thing Saunders can do in this fight against Alvarez to follow the Floyd Mayweather Jr blueprint by staying on the outside, jabbing and moving to keep from getting hit.

Throwing any power shots against the counter-punching Canelo wouldn’t be advisable for Billy Joe to do. There’s too much risk in Saunders throwing a normal power punch because Canelo is so good at landing his left hook and straight right counters.

Although Canelo is also quite excellent at countering a jab, he’s not nearly as adept at doing that when his opponents are throwing power shots.

If you’re fighting Canelo, you’re better off limiting him to countering off the jab rather than a normal shot. His accuracy isn’t nearly as good countering a jab.