According to Mike Coppinger, Saunders (30-1, 14 KOs) will be having surgery on Sunday at the John Peter Smith Hospital in Fort Worth, Texas.

He spoke to Saunder’s promoter Eddie Hearn today at the hospital, and he informed him that Billy Joe had suffered what’s known as a “quadruped fracture” of his right orbital bone in the 8th round against Canelo.

Surgery will be performed today with the hope of repairing the problem. It’s unknown if Saunders will ever fight again.

The injury occurred when Canelo (56-1-2, 38 KOs) caught Saunders with a right-hand uppercut to his right eye area while he was leaning forward in the eighth round in their unification clash at the AT&T Stadium in Arlington, Texas.

Bumped into @EddieHearn in the lobby on his way to see Billy Joe Saunders at John Peter Smith Hospital in Fort Worth. Saunders set to have surgery today on multiple fractures to his orbital bone, a complete blowout, known as a quadripod fracture. Brutal injury #CaneloSaunders

Billy Joe has nothing to be ashamed of

“Some people have come to lose to Canelo Alvarez, and there’s no shame in not being good enough to beat him,” said Eddie Hearn to iFL TV. “He’s got such a good chin, Canelo, and Billy Joe, does he have the power to put a dent in it?

“That’s the problem. He can pick shots, and he boxed beautifully at times, but Canelo was just walking him down, waiting for the opportunity, backing him up.

“Billy took a lot on the gloves, but you could hear them land, and it’s a different kind of sound. Obviously, when he hits you clean as he did to the eye, he’s going to do big damage,” said Hearn.

There’s certainly nothing for Saunders to feel ashamed of losing to Canelo based on a freak injury.

Really, the only thing you can say is that Saunders should have been wary about leaning forward against a fighter known for throwing uppercuts like Canelo. That’s a no-no.

Saunders’s career could be over

“I thought it was a good performance against a very tricky Billy Joe Saunders. The first thing is he’s going straight to the hospital, and he’ll have that operated on immediately, so he’s going to be out for a long, long time.

“We know that Billy Joe is a world-class fighter; he’s showed it. He lost to the pound-for-pound #1, and he boxed well. So for me, it depends on what he wants to do,” said Hearn in speculating what Billy Joe will do with his career now that he’s lost and suffered a bad eye injury.

It will be interesting to see if Saunders can come back from this injury, as it could potentially be the end for him.

We saw what happened with Kell Brook when he suffered a bad eye injury in his loss to Gennadiy Golovkin in 2016, and he was hit with the same type of uppercut punch while leaning forward. 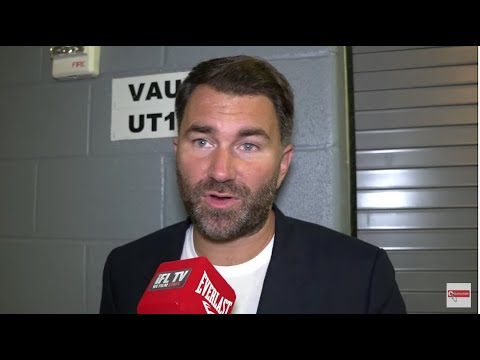 
« Canelo is the big boss again

Saunders’ trainer: His eye socket was caved in, he couldn’t see »