VIDEO: Dillian Whyte is back in business

Dillian Whyte is back in business.

Last August Dillian Whyte squared off against Alexander Povetkin in a battle of heavyweight contenders. This was the first significant heavyweight fight that happened after COVID-19 changed the entire boxing landscape, and indeed, the entire world. The fight happened only 6 months after Tyson Fury had stopped Deontay Wilder in their highly anticipated rematch, but the global pandemic had impacted everything. 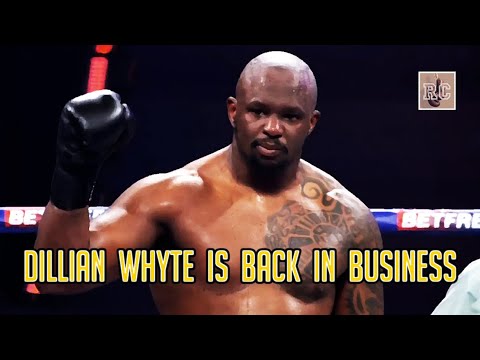 The general expectation going into the first fight between Whyte and Povetkin was that Dillian Whyte was a force on the rise, whereas Alexander Povetkin was an aging contender whose career was winding down. And early on, it looked like this expectation would play out the way many fans expected it might. Whyte dropped Povetkin twice in the 4th round, and Povetkin appeared to be in some serious trouble. But in round 5, Povetkin knocked Whyte out with an incredible uppercut that was beautifully set up.

The rematch happened last Saturday night. The Body Snatcher seized control early and never looked back. He had Povetkin stumbling around in the opening round, and Whyte was effectively in cruise control as he patiently boxed while working behind a snappy jab and landing some sneaky right hands. Whyte hurt and dropped Povetkin in round 4, and while Sasha bravely beat the count, he was mighty wobbly. The referee waved off the action just as Povetkin’s corner was throwing in the towel. So Dillian Whyte avenged a devastating stoppage loss when he scored a devastating stoppage of his own in his second meeting with Povetkin.

With the prospects of an upcoming two fight series between unified IBF/WBA/WBO heavyweight champion Anthony Joshua and the WBC and lineal heavyweight champion Tyson Fury, it is difficult to predict where Whyte figures into the bigger title picture. But if he keeps winning then he will be in line for a title shot sooner or later. And with a potential mega bout between Fury and Joshua looming large, there are some big name heavyweights out there that can potentially make for some great match-ups with The Bodysnatcher while we wait for the dust to settle between Fury and Joshua – assuming that actually does come together.

This edition of Rummy’s Corner will provide some quick thoughts on Dillian Whyte’s victory in his rematch against Alexander Povetkin.