The inactive former four-division world champion Mikey believes that the power and the toughness of the hungry 25-year-old Barrios could be an issue for Tank, who will be coming up in weight two divisions to take the fight with Texas native.

Gervonta is looking to pad his resume by going up in weight, but it’s not going to do as much for him as he thinks. He would be better off facing the best possible opponent than cherry-picking a vulnerable champion at 140 in Barrios.

If Gervonta had stayed at 130, he could fight WBC champion Oscar Valdez, Shakur Stevenson, Vasily Lomachenko, or Joseph Diaz Jr. and Jamel Herring.

Those guys would be a lot risker fights for Tank than facing the flawed paper secondary WBA champion Barrios, who recently struggled against the well-known PBC undercard filler-fighter Ryan Karl last October in San Antonio, TX.

“A tough fight for Tank, not an easy fight for Tank,” said Mikey Garcia to Fighthype about Gervonta’s match against Barrios. “He’s strong, but he’s not naturally big like Barrios.

“Barrios is a big dude and strong. That’s a tough fight for Tank. That’s a great match-up for the fans, and it’s also a great opportunity for Barrios.

“I know he’s a great fighter, but he hasn’t had the opportunity to showcase to stake a claim like that. This will do that for him.

“If he can fight the way I’ve seen him and pull it off. Everybody is going to be looking at him now. It’s a great match-up for those reasons.

“Not yet. It’s a tough one. It’s almost like a 50-50,” said Mikey when asked if he’s leaning in one direction or another for the Tank vs. Barrios match.

“I wouldn’t be surprised if Barrios pulls this off. He’s a very good fighter, talented, tall, and big. He’s naturally big and strong,” Mikey said in showering Barrios with praise.

What this writer saw of Barrios against undercard fighter Ryan Karl, he stands no chance of beating Tank Davis. That’s why Tank and his promoters at Mayweather Promotions have picked Barrios. They see him as beatable.

Garcia believes the weight will be a problem for Tank

“Tank is a very good and strong fighter, but a smaller weight,” said Mikey. “Moving up to 140 could make a big difference. 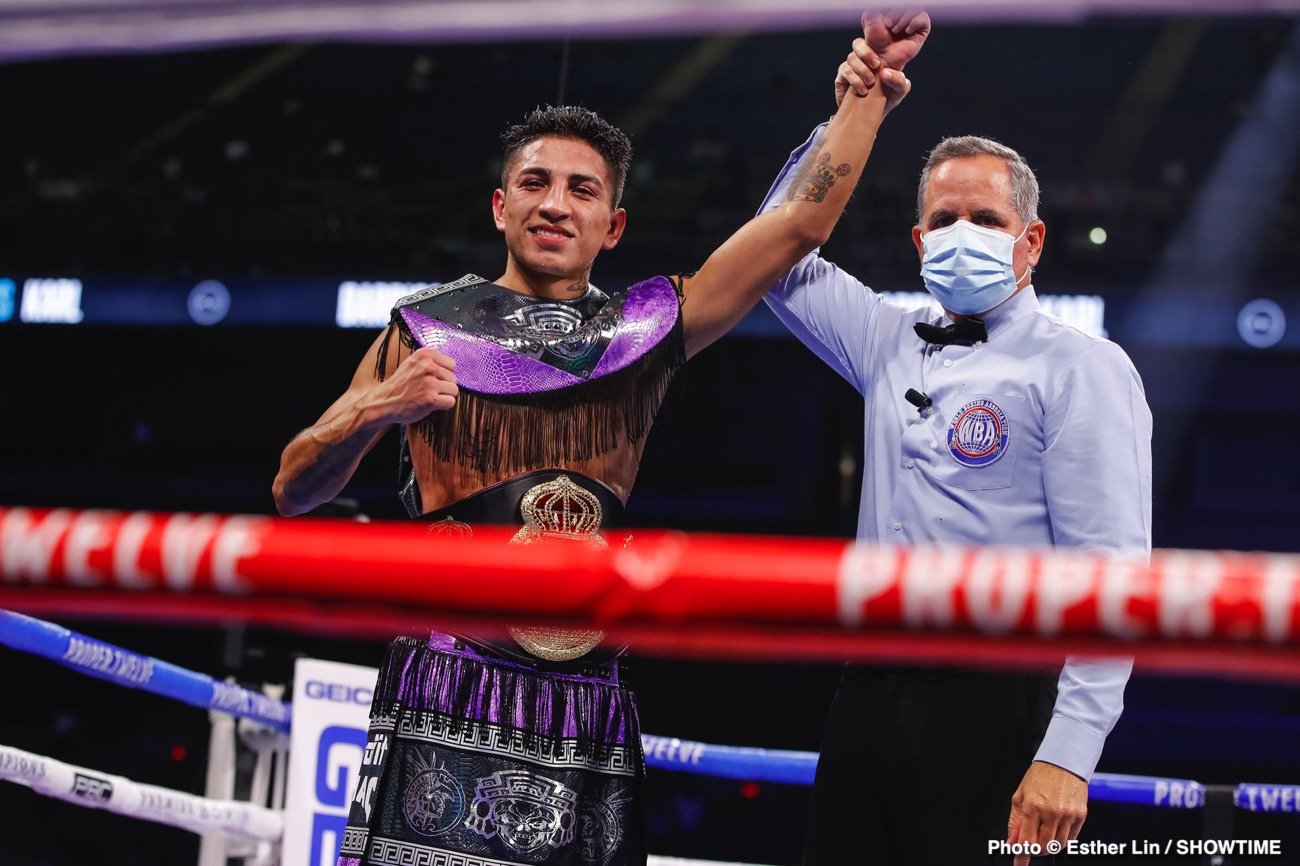 “That’s why I can’t quite say that Tank is going to win or Barrios because Tank is very strong and very good. It’s a close fight, and that’s why it’s such a good match-up,” said Mikey.

The weight could be a problem for Tank if he were fighting one of the talented 140-pounders like Jose Ramirez, Regis Prograis, or Josh Taylor but not against Barrios.

There are levels in boxing, and Tank has been operating at a much higher level than Barrios. It’s good that Mikey rates Barrios so highly, but he needs to put down his pom-poms and focus on reality. Tank is a better fighter, period.

“We could probably get that in the future if that’s a match-up that interests the fans and could get that fight. That would be a good fight,” said Mikey about a match between him and Regis Prograis.

Mikey already had the chance to fight Prograis last year, but he chose the easier option in facing past his prime Jessie Vargas. It was a good decision by Mikey because Prograis likely would have beaten him.

At this point in Mikey’s life, he seems to be just looking to hustle fights and mess around with his cars. He no longer seems serious about his career, and he’s just going through the motions.

The one fight that Mikey wants is against Manny Pacquiao, and he probably would have had it already if he’d have stayed busy instead of getting fat and messing around with cars 24/7.