By Dan Ambrose: Billy Joe Saunders’ own countryman Chris Eubank Jr and David Haye both see him going down in flames next week in his 168-lb unification fight against Canelo Alvarez on May 8th at the AT&T Stadium in Arlington. Texas.

As much as Haye likes Saunders as a fighter, he doesn’t see how he can beat a fighter in the class of WBA/WBC super middleweight champion Canelo (55-1-2, 37 KOs) in their fight on DAZN and Sky Sports.

Saunders will likely try to use the Floyd Mayweather Jr blueprint by staying on the outside, jabbing, and moving all night long.

That style worked for Mayweather in the first half of the fight, but Canelo came on strong and was the better fighter in the second half.

Saunders likely won’t beat Canelo using that style because the judges in the U.S score on quality don’t favor the amateur jabbing style that Mayweather used many years ago.

“10,000 bet that he [Saunders] gets knocked out,” said Eubank Jr to iFL TV in betting that Canelo Alvarez stops Billy Joe.

“I think the southpaw style [of Saunders] could give Canelo [problems],” said David Haye to iFL TV. “Canelo works best when people are coming at him, giving him something to punch off of. It’s hard to punch when someone is at long-range, counter-punching southpaw.

“He’s [Saunders] has got a style to cause him problems, but it’s hard to go against Canelo. He’s so good. He shows the invincibility that you [Roy Jones Jr] had throughout your career.

“You can’t see how [to beat him]. You’ve just got that style. What can you do? He [Canelo] always finds a way. I just hope it’s going to be an entertaining one, but I just can’t bet against Canelo.

“When he fought Kovalev up at light heavyweight, I thought maybe he had bitten off more than he can chew.

“If anyone is going to cause him [Canelo] some problems, it’s that awkward southpaw style. I’m looking forward to it; it can’t come too quick,” said Haye.

Saunders will get countered if he throws nothing but jabs because Canelo is going to move in quickly to nail him with right hands over the top.

What we’re likely to see is Saunders running around the ring all night, looking poor and putting on a bad survival-oriented show for the fans at the AT&T Stadium in Arlington, Texas.

Unfortunately, Canelo is so dialed in on trying to unify the super middleweight division because many other fighters at 160, 168, and 175 that the boxing public in the U.S would prefer to see him fight.

If Saunders loses badly to Canelo, it’ll be interesting to see what his promoter Eddie Hearn does to bring him back. If Hearn matches Saunders against a good super middleweight like Benavidez, Edgar Berlanga, or Carlos Gongora, he’ll surely lose.

It won’t serve any purpose for Saunders to fight someone like John Ryder, Gabe Rosado, Daniel Jacobs, or Callum Smith because those guys aren’t relevant.

Billy Joe is starting to look very old for a 31-year-old, and he doesn’t have the power to beat any of the other top super middleweight. If you put Saunders in with David Benavidez, he’ll get mowed down.

Hearn might be better off cutting Saunders loose after he loses to Canelo if he continues to give him grief because he’s not going anywhere.

It’s nice that Billy Joe’s friend Tyson Fury is so supportive of him, but he’s not good enough of a fighter to beat any of the top guys at 168 or 160. You hate to say it but Saunders is a textbook definition of a ‘Paper champion.’ 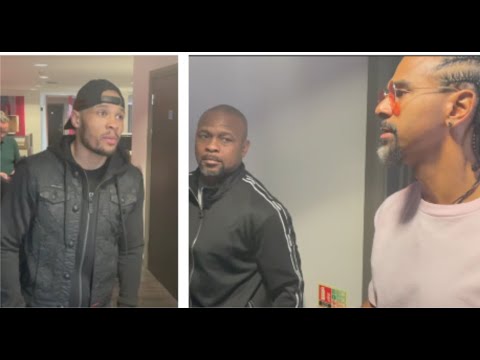