By Sean Jones: Andy Ruiz Jr says he’s weighing 257 pounds right now ahead of his next fight in less than two weeks against Chris ‘The Nightmare’ Arreola on May 1st. This is 26 lbs lighter than the flabby 283 lbs that Ruiz weighed in for his last fight against Anthony Joshua in December 2019.

Former IBF/WBA/WBO heavyweight champion Ruiz (33-2, 22 KOs) says he expects to weigh in at 255 lbs for his 12-round headliner fight against Arreola (38-6-1, 33 KOs) on FOX PBC pay-per-view at the Dignity Health Sports Park, in Carson, California.

Andy believes that sharing the gym with greats like Canelo has helped him become more dedicated and more focused.

Ruiz predicts Arreola fight will be a war

“I’m not where I want to be at, but I’m better than where I was at,” said Andy Ruiz to Fighthype on his weight loss. “We’re in a better place, and we’re ready to rock and roll.

“It is because me and him are Mexican fighters,” said Ruiz when asked if his fight with Arreola will be ‘a war.’ “We don’t like to give up, we keep banging, and we keep going.

Ruiz might need to lose a little more weight because he still looks to be carrying around an extra 10 lbs that he could stand to lose.

If Ruiz gets down to the mid-240s, he’ll likely be quicker on his feet, which is what he’ll need to be for him to have a chance against Anthony Joshua and Tyson Fury.

“The main thing is staying busy. I want to be like Canelo in staying busy, and I’m learning so much from there [Eddy Reynoso’s gym],” Ruiz Jr said.
“Staying disciplined, staying in the gym every day. It’s helping me a lot. I wish I had done this a long time ago. 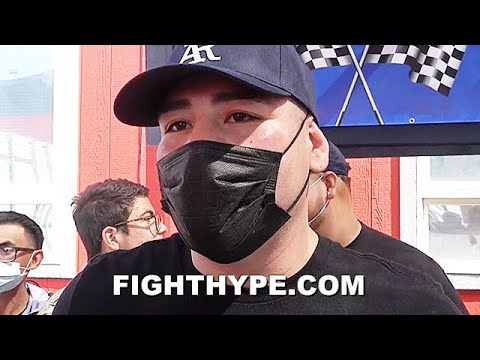 “Of course,” said Ruiz when asked if he would ever agree to fight Tyson Fury. “The main thing is Chris Arreola first. I don’t want to overlook anybody.

“He’s [Fury] going to fight Anthony Joshua, so I have to wait until whoever wins. I should have been there [Reynoso’s camp] a long time ago. I feel my mentality would have been so different,” said Ruiz.

Staying in the gym, controlling his eating, and no partying too much is the key for Ruiz. He has plenty of time to live it up once his career is over, but for now, he needs to be serious about his career.

Deontay Wilder: I’m going to continue to show my greatness »