Former unified heavyweight champion Andy “The Destroyer” Ruiz Jr. took time out from training this past Saturday to lend a hand to those in need, as he joined the Project Hope initiative and helped distribute 500 bags of groceries to families in Las Vegas. Ruiz returns to the ring in the FOX Sports PBC Pay-Per-View main event Saturday, May 1 against all-action heavyweight Chris “The Nightmare’’ Arreola from Dignity Health Sports Park in Carson, California.

“This is a really important event for my community,” said Ruiz. “All the Mexican people, all the Raza. There is so much love here, and I just want to show everyone that anything is achievable.” 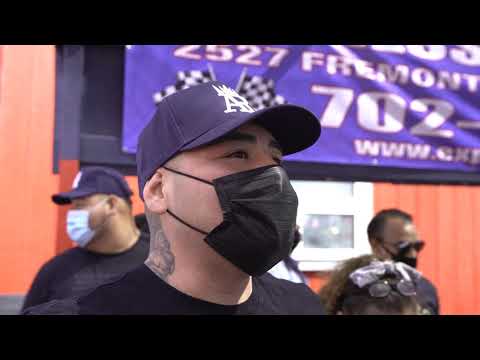 Ruiz was joined by his trainer Eddy Reynoso and shared the stage with heavyweight champion Tyson Fury at the event. Ruiz spoke to the crowd that gathered and expressed his belief in overcoming adversity.

Ruiz Jr. has stayed involved with charitable efforts thought his career. The Mexican-American star also visited the Disabled Children’s Association and the Charity Committee for Orphans Care in Riyadh, Saudi Arabia before his most recent fight with Anthony Joshua in December 2019.

For more than 60 years, Project HOPE has transformed the health and well-being of people and communities around the world. They work on the front lines of the world’s health challenges, partnering together with communities, health care workers and public health systems to ensure sustainable change.

The event is promoted by TGB Promotions. Tickets are on sale now and can be purchased at AXS.com. Dignity Health Sports Park will be open to fans in a limited capacity, with all guests remaining socially distanced and subject to local and state health guidelines throughout the event.

The FOX Sports PBC Pay-Per-View is priced at $49.99. Buy now on foxsports.com/ppv and watch on any screen!


« Eddie Hearn: Charlo and Golovkin would be the favorite against Andrade

Joshua might not have McCracken in his corner for Fury fight »