Okolie, 28, used 6’5″ height and long reach to pound away against the shorter 6’0″ Glowacki until stopping him in the sixth. 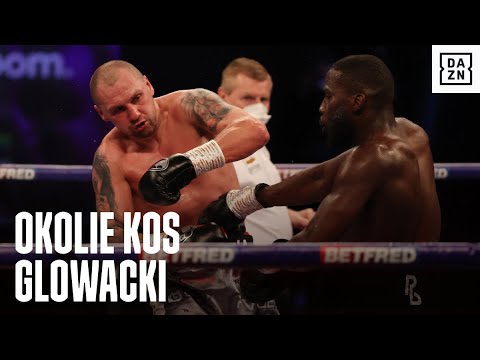 The finisher came with a beautiful right hand to the head of Glowacki that bowled him over. Although Glowacki, 34, beat the count, referee Marcus McDonnell decided to halt if anyway.

Glowacki wasn’t in good shape, and it was a good stoppage. The fine of the stoppage was at 46 seconds into the sixth.

“I was sure I was going to get to him, as I knew I had the power to knock him out,” said Okolie. “It was hard for him to catch up to me.”

In the third, Fowler teed off on Fortea, knocking him down twice to force a stoppage. It was a good victory for Fowler, but he wasn’t facing an elite guy.

The fight, along with the card, will be shown live on DAZN and Sky Sports, beginning at 3:00 pm ET. Boxing News 24 will be giving updates below on the action.

We don’t know what we’re going to get from Okolie because he has no experience in the pro ranks against top-tier opposition. Lawrence’s promoter has treated him with kid gloves since he turned pro in 2017.

Perhaps one reason for that is how Cuban Erislandy Savon twice beat Okolie with ease in the amateur ranks, stopping him in the third round in their 2016 fight.

Savon, who was arguably robbed of a victory in the 2012 London Olympics against Anthony Joshua, dominated Okolie in two fights and showed that he’s susceptible to power shots.

If the southpaw Glowacki can land his big punches early, he’s got an excellent chance to send Okolie down to defeat in the same Savon did.

Since turning pro, Okolie has wins over these notable domestic-level fighters:

2016 Olympian Okolie is the favorite in this fight due to his youth, 6’5″ size, power, and pedigree. Some boxing fans are critical of Okolie’s promoter Eddie Hearn, saying that he’s buying him a world title.  This might be as good as it gets for Okolie.

His promoter Hearn has lobbed him a perfect opportunity to win an easy title against the ring rusty, shopworn Glowacki.

The Hearn critics point out that Glowacki hasn’t fought in two years since his loss in 2019, and he hasn’t won a fight since 2018 when he beat Maxim Vlasov.

This is boxing, though, and anything is possible. The inactivity that Glowacki has been dealing with likely won’t be a factor tonight. If he’s destined to win, he’ll have his hand raised.

The former 2-time WBO cruiserweight champion Glowacki will be looking to recapture his old title for a third time tonight.

That was a fight where Glowacki never appeared to fully recover from an elbow that he took to the head in the second round.

It was an out-of-control fight with fouls from both fighters and action that spilled over after the bell had sounded to end the second.

Glowacki was dropped after the bell to end the second, and he didn’t recover fully in between rounds. Briedis took advantage of the situation to stop Glowacki early in the third.

“The guy I’m fighting is a two-time world champion, and I think stylistically, it works in my favor,” said Okolie to Sky Sports News. “I think I’ll stop Glowacki between five and eight.

“He’s probably looking at me as inexperienced, and I won’t be able to deal with what he brings. Hopefully, he brings something, and I’ll get the stoppage between five and eight.  I’m not bothered by southpaws.

“I was on the Great Britain team with two southpaws. I’ve had a year of southpaw sparring. The majority of the time, a straight right hand is good against southpaws. We’ll see.

“The criticism that has come from outside is irrelevant,” said Okolie in reacting to critics that have called him ‘boring’ to watch due to his tendency to hold a great deal.