Dillian Whyte warns: I’ll do whatever I need to do to win against Alexander Povetkin

By Charles Brun: Dillian Whyte sounds like he’s ready to turn his rematch with Alexander Povetkin into a physical one will require the referee to be on his J-O-B this Saturday night at Gibraltar.

The 32-year-old Whyte warns he’ll do whatever he has to for him, and you can fill in the picture of what lengths he’ll take to get the victory.

If you saw how physical Whyte was in his foul-filled win over Joseph Parker in 2018, you’ll know what he’s capable of doing on Saturday.

Dillian needs a win over Povetkin to regain his WBC interim heavyweight title and his mandatory spot so that he can challenge the winner of the Anthony Joshua vs. Tyson Fury fight.

Whyte’s promoter Eddie Hearn says he’s going to sit down on Sunday and try and figure out how he can get him a title shot against the Joshua-Fury winner as soon as possible.

Dillian doesn’t want to wait until 2022 to challenge for the WBC title, which means that the title may need to be vacated by the winner of the first Joshua-Fury fight.

That’s obviously not how Whyte wants to win the WBC title, but that might be his only option if he makes a big production about getting his mandated shot in 2021.  Of course, none of this will matter if Povetkin beats Whyte again.

At this point, any loss for Dillian could signal the end of the line for him as a major player in the heavyweight division. A loss for Whyte will put him in the same position Dereck Chisora is in with his many defeats and no chance of fighting for a world title.

“The main thing is to win. Whatever I need to do to win, I’ll do it. This is the most important fight of my career,” said Whyte.

I think Whyte is referring to Joseph Parker when he talks about having “outfought better fighters” in the past. That’s the only high-caliber fighter that Whyte has beaten during his career, and that was a fight that Parker could have won if the referee had controlled the roughhouse tactics that Dillian was using.

As long as Whyte doesn’t start fouling Povetkin with the elbows, head-butting, low blows, or rabbit punching, things should be fine on Saturday.

The fight needs to be fought on an even playing field, and hopefully, both guys aren’t looking to get an illegal edge by fouling.

We don’t need an ugly fight where both guys unload with every type of foul under the sun for the duration of the contest.

“This is boxing. I’m used to bouncing back,” said Whyte. “I’m constantly improving. I’m still learning and getting better every day, and on Saturday, I leave it all on the line again.”

Well, technically, Whyte has only bounced back once in his career, with him coming back from a knockout loss to Joshua in 2015. Dillian says he’s “used to bouncing back,” as if he’s lost many times, and that’s not the reality here.

Whyte bounced back from his loss to Joshua to win 11 consecutive fights before losing to Povetkin last August, but he didn’t fight anyone special to bounce back.

Parker is perhaps the best guy Whyte beat during the last five years, and that was a fight he could have lost with a referee that was on his JOB.

Dillian’s first win over Chisora in 2016 was a highly controversial 12 round split decision that many boxing fans felt he lost.

Additionally, Whyte’s victory over Oscar Rivas in 2019 had an element of controversy to it with the way that Dillian was hurt in the 12th round from a body shot.

The referee mistakenly thought it was a low blow, and he gave Dillian a breather in a crucial moment.

“I don’t have this mindset that I’ll knock him out. It could go the distance; I’m not focusing on the knockout, and I’m going to follow my plan,” said Povetkin. 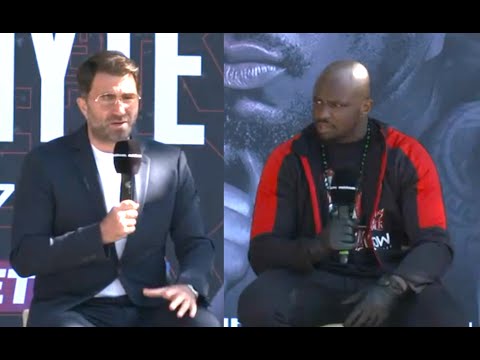 Keith Thurman to fight in July, targeting Berto or Alexander »