By Jim Maltzman: Oscar De La Hoya made a surprise announcement in a dramatic fashion in revealing that he’ll be coming out of retirement on July 3rd.

The 48-year-old De La Hoya made his comeback announcement at the Jake Pake vs. Ben Asken press conference, and then he walked out immediately after dropping the microphone on the floor after his earth-shattering revelation.

The former six-division world champion De La Hoya (39-6, 30 KOs) didn’t say who his opponent will be for his July 3rd comeback, but he did mention recently that he wants a rematch with Floyd Mayweather Jr or an elite fighter.

Mayweather, 43, is obviously out of the question for De La Hoya, as he’s scheduled to face YouTuber Logan Paul next, but we could see Oscar take on a top-level guy.

“You heard it here first and he dropped the microphone. Only West Coast kings can do that, do you understand me,” said Snoop during the Jake Paul vs. Ben Askren press conference on Friday. 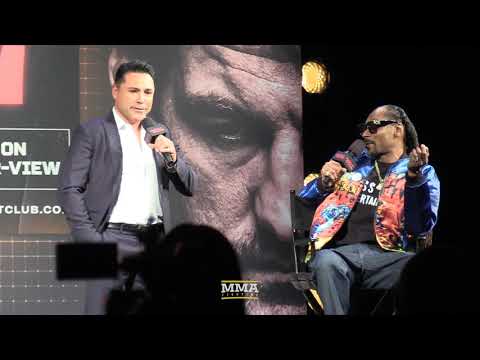 It’s unclear why De La Hoya chose to make his comeback announcement on a Triller show because Golden Boy Promotions’ fighters have been fighting on DAZN.

Unless De La Hoya plans on fighting on Triller, it seems like an odd place to make his comeback announcement. But perhaps this is just the beginning of many interviews in which Oscar discusses the news of his comeback plans.

De La Hoya hasn’t fought in 13 years since losing to Manny Pacquiao by an 8th round stoppage in an ill-advised fight at 147 in December 2008.

Despite not having fought at welterweight in seven years, De La Hoya agreed to fight a prime Pacquiao at 147, and the results were disastrous for him.

The then 34-year-old De La Hoya looked weight drained and was no match for Pacquiao. Not long after the fight, De La Hoya retired despite still having a lot left in the tank.

De La Hoya has talked recently about wanting to fight at 154, but he’s going to need to lose some weight for him to get down to that division.

IBF/WBA/WBC junior middleweight champion Jermall Charlo would like to fight De La Hoya, but that’s not likely what he has in mind.

De La Hoya can make a lot of money if he fights someone like Errol Spence Jr, Terence Crawford, or Pacquiao. The way Oscar has been talking, he wants nothing to do with fighting an old-timers bout unless it’s Floyd Mayweather Jr. 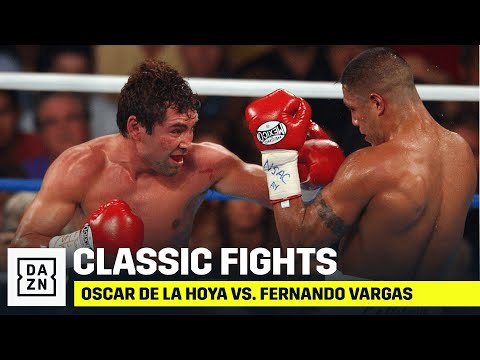 But it’s so many years that De La Hoya has been out of the sport, he’s going to be no match for any of the younger prime fighters that he’s anxious to face.

If De La Hoya is able to talk Spence into fighting him, he may not last long unless he’s carried the way Mayweather carried Conor McGregor.

It won’t do the sport any good if De La Hoya’s opponent takes it easy on him, fighting at one-quarter speed to make sure that he makes it the full 12 rounds.

There is a big incentive for De La Hoya to make a comeback, starting with the money. With the huge revenue De La Hoya can bring in for his return to the ring, he can pump it into his promotional company Golden Boy to keep it running smoothly.

Golden Boy lost Canelo Alvarez recently, and that’s got to hurt. They’re currently pinning their hopes on Ryan Garcia and Vergil Ortiz Jr to be their next stars, but there’s a lot of question marks about both of those fighters.

De La Hoya needs someone like Gennadiy Golovkin to make the most amount of money for his comeback fight, and that’ll be a hard fight for him.