Billy Joe Saunders: A punchable Face but not a very hittable Face

by Joseph Hirsch – Boxing fans always make the same mistake. A boxer gets on a long streak of impressive wins and we start to think of him as invincible. It doesn’t matter how knowledgeable the fan is, either. Older heads may lie about it now, but back when Mike Tyson was in his atomic prime, everyone but Tyson’s former trainer Teddy Atlas thought only a Panzer tank had a prayer against Iron Mike. Even Max Kellerman bought into the myth, and he knows boxing like a sailor knows the tides. Yes, Max knew everything about boxing even back in the days when he and his late brother Sam (R.I.P.) ruled the public access airwaves.

Saul “Canelo” Alvarez more than any other active boxer wears the mantle of invincibility right now. Senator Manny Pacquaio has accrued a greater legend than Canelo, but it’s built mainly on past deeds rather than current actions.

To be fair, Canelo has earned his place at the top of the pound-for-pound list and he is also probably en route to punching his way into the pantheon of all-time greats. His resume is stellar and spans an impressive number of weight-classes. He’s seen pretty much every style in the ring, from slick Cuban southpaw Erislandy Lara to Sergei Kovalev, a literal mankiller with a poleaxing jab (even post-prime). Under the tutelage of trainer-of-the-year Eddie Reynoso, Canelo’s grown to have as much in common with James Toney as Mexican fistic idol Julio Caesar Chavez. He can avoid shots, cut the ring, and punch clean enough that even Adalaide Byrd can see the shots. You have to go back two presidential administrations to get to a time when he lost a fight, and that loss was to Floyd “Money” Mayweather, arguably the best boxer of his generation. And there can be little doubt if Floyd were to give Canelo a rematch now, he might find it more difficult than beating up YouTube stars or kickboxers in matches including “no-kick” clauses.

And yet I still feel comfortable saying in front of man, God, and the entire internet that England’s Billy Joe Saunders has a very good chance of upsetting Canelo.

The opening line on Canelo-Saunders is not a heck of a lot different than the line was for Callum Smith vs. Canelo, and on paper it’s not hard to see why. Saunders has been plagued by injuries in training, has had long bouts of in activity, and has switched trainers multiple times. His personal life is rife with drama that it would be unseemly to recount here. He seems a bit “off” in the head and his kidology against opponents gets tiresome for those who like their boxers dignified. His “You’ll be punching fresh air, innit?” taunts and even recruiting his son to punch an opponent in the testicles would probably make Andrew Golota smile fondly, but it earns an eyeroll from most others.

That said, when he is switched on Billy Joe can box. His head movement not only frustrates opponents, but baits them into throwing shots that put them out of position and at the mercy of lightning-quick counters. And those counters come in fluid combos followed by graceful tactical retreats. Billy Joe punishes aggression in the most painful way, by humiliating rather than simply hurting his opponent.

The tendency among fans, media experts, and insiders will be to say that none of Billy’s mind games will work on Canelo. Even BJ said as much in an interview with DAZN’s Chris Mannix, opining, “He’s heard it all, hasn’t he?”

Maybe, but Billy’s decision to praise Canelo repeatedly and to behave in an uncharacteristically gracious manner makes me think the mind games have only just begun. It’s a classic “Kill them with kindness” strategy, reminiscent of Ray Leonard’s praise and gratitude expressed to Marvelous Marvin Hagler (R.I.P) in the runup to their super fight. The Marvelous One admitted as much, shaking his head and muttering that he didn’t know how to react to such flattery, that it was easier being berated as a midget by Tommy Hearns.

Remember how strangely respectful Bernard “the Executioner” Hopkins was in the runup to his fight with Kelly “the Ghost” Pavlik? Bernard had rarely if ever showed an opponent such respect prior to squaring off with them. He’s also rarely if ever dissected, deconstructed and frankly ruined a man as thoroughly as he did poor Kelly.

But Canelo’s not Kelly Pavlik, I hear you saying, and Billy Joe isn’t Ray Leonard. And fights aren’t won or lost in press conferences or on promotional junkets.

All true, but there’s something about the personality clash outside of the ring between Saunders and Canelo that I think will be reflected in the actual fight. It has the classic, almost fablelike quality of the proud hunter being taunted by the wily prey. In the cartoons, Elmer Fudd had the guns and Wile E. Coyote had the Acme-brand dynamite, but Bugs Bunny and the Road Runner always made their stronger foes look ridiculous.

Billy Joe Saunders’ face is very punchable, but it is not very hittable, and if Canelo tries to headhunt he will miss. If he misses with enough big shots, his previous issues with stamina will show during the last four stanzas of the fight. And if a fighter is exhausted in the championship rounds, one does not have to be a puncher to capitalize on it. A feather dusting jab (or even not accepting a clinch) has many times been more than enough to send a once-mighty foe to the canvas. Granted, Billy Joe has showed stamina issues before, too, but they’ve all been the result of cutting corners in training. He knows this is the most important fight of his life, and that AT&T Stadium in Arlington is going to be filled to the rafters with as many travelling gypsies and Englishmen as Mexican fans. A fight with Canelo Alvarez is the most lucrative prize in boxing (aside from perhaps a fight with Anthony Joshua). The only thing that might be worth more is a rematch against a beltless Canelo so eager to redeem himself that if Billy wins this one he will basically be running the table during rematch negotiations. BJ is not travelling across the Pond with half his country behind him just to lose, at least not in a wipeout. 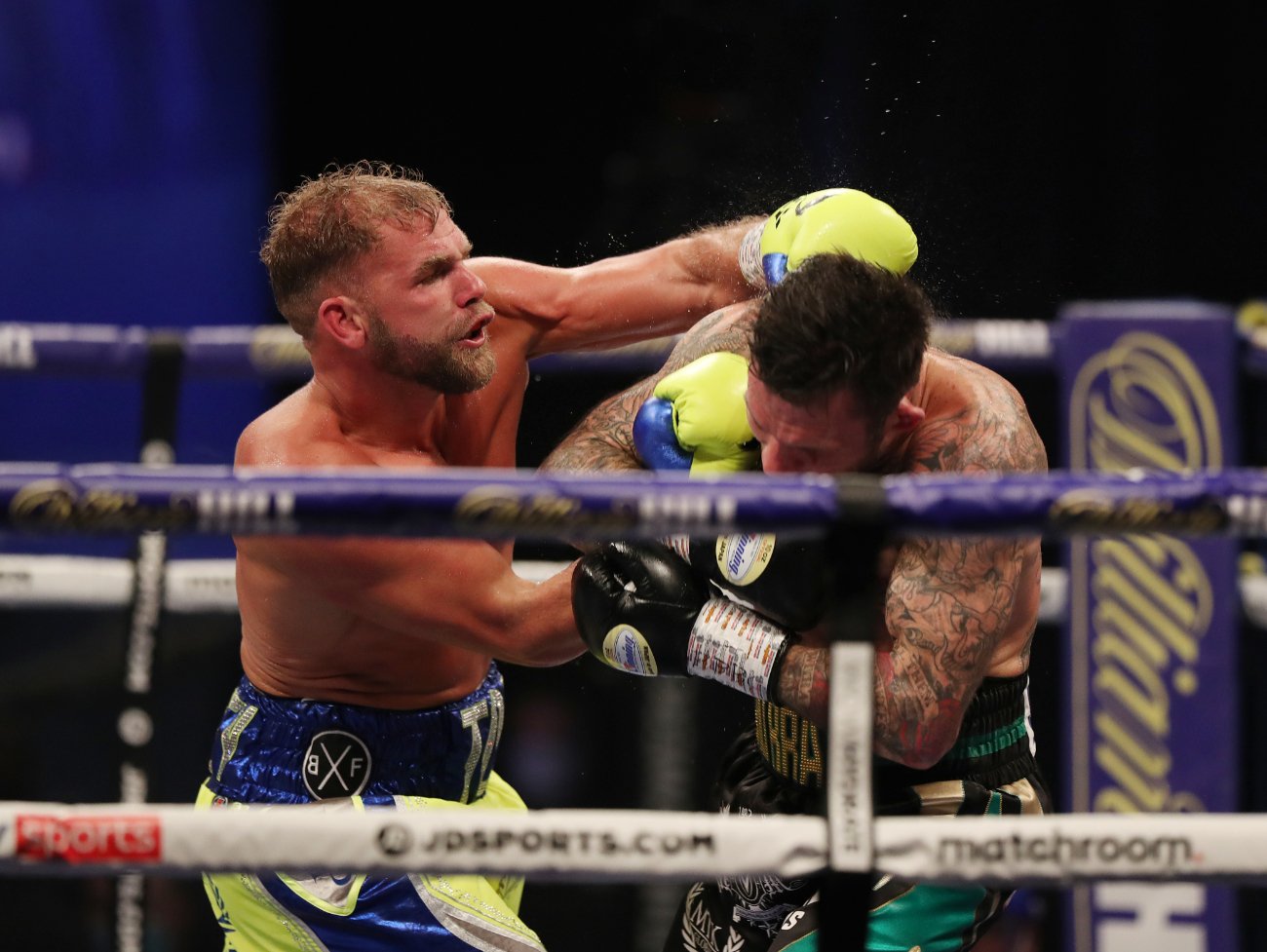 Canelo is rightly the favorite going into the fight, but a closer opening line of something like two-to-one better reflects the reality. Yes, Billy has better footwork, but Canelo’s body shots are the stuff of nightmares. Flexing one’s abs while getting drubbed on the stomach with the medicine ball is not adequate preparation. Billy Joe would be better served having his trainer stand at the top of a stepladder and drop an anvil on his belly. If Canelo ignores the head, sticks the jab to the solar plexus, and hooks the body, he can take away Billy’s greatest asset, his legs. He’ll be able to stake him to the spot and throw debilitating combinations that will hurt Billy and test his will and conditioning like they’ve never been tested before. But that’s a big “if,” and if Canelo can’t find the body then the predator can quickly become prey. A bear looks good until his foot is caught in a beartrap, and the truth is that Canelo, despite all of his assets, needs to set his feet to fire and does not like working off the backfoot. BJ Saunders could ice skate and punch simultaneously and I wouldn’t be surprised to learn that he moonwalked his way out of his mother’s womb.

But therein lies the rub. Most of this fight may come down to footwork and jockeying for position, with BJ scrambling to find the exits when he doesn’t want to work and Canelo cutting the ring to close off his quarry’s escape options. In order for BJ to win, he is likely going to have to produce a stinker. There could be long stretches of the boxers feeling each other out, feinting, resetting, and even some stance switching. Hardcore fans love these quiet defensive gems. But you can expect drunken patriotic revelers out for blood and waving flags to start peppering both fighters with boos, first in smatterings and then in deafening cacophonies.

And here’s the other thing about stinkers: they very often go to the cards. I won’t go as far as Pauli “Magic Man” Malignaggi did when he got jobbed by Juan Diaz in Houston and say that “Boxing is full of shit,” or that Golden Boy has gofers to do its bidding. Rather let me put it as diplomatically as I can and say that when the fight is close, Canelo tends to get the benefit of the doubt. And sometimes even when the fight isn’t close, Canelo gets the benefit of the doubt (see the egregious draw he scored on one of three cards in his fight against Mayweather).

If Laurence Cole is reffing, look out. And if Adelaide Byrd is scoring…brace for a potential melee of Golota-Bow proportions. It’s not a guarantee, but a simple actuarial equation reveals it to be possible: Ethnic pride + alcohol + robbery = chairs and fists flying, unless Saunders gets on the mic and tries to calm tempers. And such diplomacy was never BJ’s strong suit.

For those sticking with Canelo even after hearing me plead my case, I can’t say that I blame you. There is nothing on BJ’s record to suggest that he will win. He struggled at times against Chris Eubank Jr. and proved susceptible to the heavy-handed assault of fellow Romanichal Traveller Andy Lee. But the curse of the pure boxer is to grow easily bored when not challenged, and to fight to the level of opposition. An easy analogy would be to Saunders’ close friend (also a Traveller) Tyson Fury, who has looked absolutely abysmal in mandatories and tune-ups and has been a wonder to behold in title fights.

There may be no greatness in Billy Joe Saunders when he is outside of the squared circle. But I think there’s a very good chance you’ll see it when he steps between the strands to fight the pound-for-pound best boxer on Planet Earth on May Eighth.

If I’m wrong, I’ll be the first to admit it, and gladly eat humble pie, crow, and whatever you wish to throw my way in the comments section.