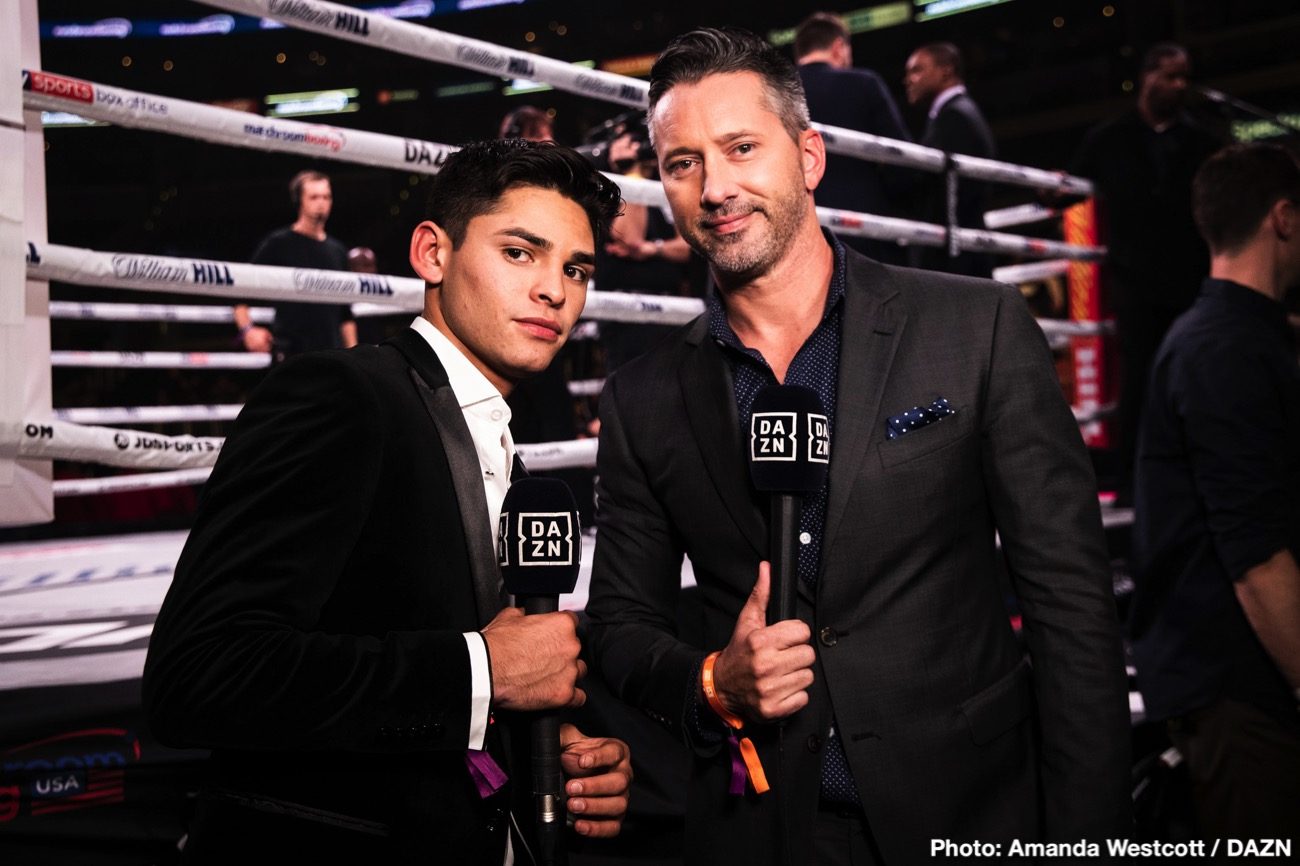 By Matt Lieberman: Trainer Bill Haney is advocating the removal of Ryan ‘Kingry’ Garcia entirely from the WBC’s rankings due to him choosing not to use his mandatory status or his interim title to challenge WBC lightweight champion, Devin Haney.

Bill is now calling Ryan Garcia, ‘Lying,’ says he wants to see his birth certificate because he doesn’t believe he’s Mexican because he’s not shown the courage they have.

Bill believes that King Ryan is indifferent about fighting for a world title against Haney because he’s got the social media thing that he can go into once he ends his boxing career.

With guys like Logan Paul and Jake Paul making millions each year on YouTube, it’s something that Ryan can easily move into after he retires and make huge money. He says he wants to retire at 26, which he may opt to speed up.

What Bill says about him wanting to have the World Boxing Council remove Ryan Garcia from the top 15 ranking does make a lot of sense, though, because there’s no point in him keeping the mandatory spot or the interim WBC lightweight title if he refuses to challenge Haney for the belt.

Haney’s promoter Eddie Hearn thinks Ryan may have had a bad experience in the past from his amateur fights against Haney, which has put him off the idea of facing him in the professional ranks.

Hearn expects the WBC to order Ryan to face #2 WBC Javier Fortuna next.

Unfortunately, King Ryan said last week that a fight against Fortuna would be a backward move for him, and he’s not interested. The only fights Ryan wants are Manny Pacquiao and Gervonta Davis.

“What we can do is ask Ryan [Garcia] to show his birth certificate because I think Devin has more Mexican in him than Ryan,” said trainer Billy Haney to AKHi TV.

“Ryan is not representing the Mexican community that I know that never backed down, straight forward, go get him.

“We come out of Tijuana fighting, so we know the spirit and the energy. We grew up right here in the Bay Arena, and I have friends that are Hispanic that I grew up with that live right next door to me, and they weren’t no punks.

“They stood on what they represented. So I have a deep respect for the Hispanic community, Mexicans in general, and Ryan Garcia; I don’t even know what that was.

“Was he speaking Spanish, English? I don’t even f**** know. We need to see his birth certificate. What we have to do is give a shout-out to Ryan Garcia for the Canelo [vs. Avni Yildirim] fight.

“He did a wonderful job of cheerleading. Anytime you have a big event of that magnitude, shout-out to Eddie [Hearn] and Canelo. They both put on a spectacular event, it was a lot of fireworks, and as I said, there was a lot of cheerleading going on.

“The #1 cheerleader being Queen lying Ryan Garcia. He is the mandatory for the mandatory position, and all the rest of these guys and fights that are being suggested are just suggestions.

“They’re Plan-Bs to the actual Plan-A when Devin and I made the trip to Dallas, Texas to watch Luke Campbell and him fight, and we were more than certain the winner was going to fight Devin for the [WBC] belt.

“And then when Ryan, excuse me, I mean, ‘Lying’ got on the mic he said, he started calling for Tank, a fighter that is not on the network [DAZN].

Ryan Garcia won’t be fighting Devin Haney anytime soon. Still, it sounds like he doesn’t want to fight anyone unless their names are Tank Davis or Manny Pacquiao.

Haney wants Ryan Garcia to be removed from rankings

“If Ryan Garcia doesn’t want to be a part of it, he should be removed from the rankings,“ said Bill. 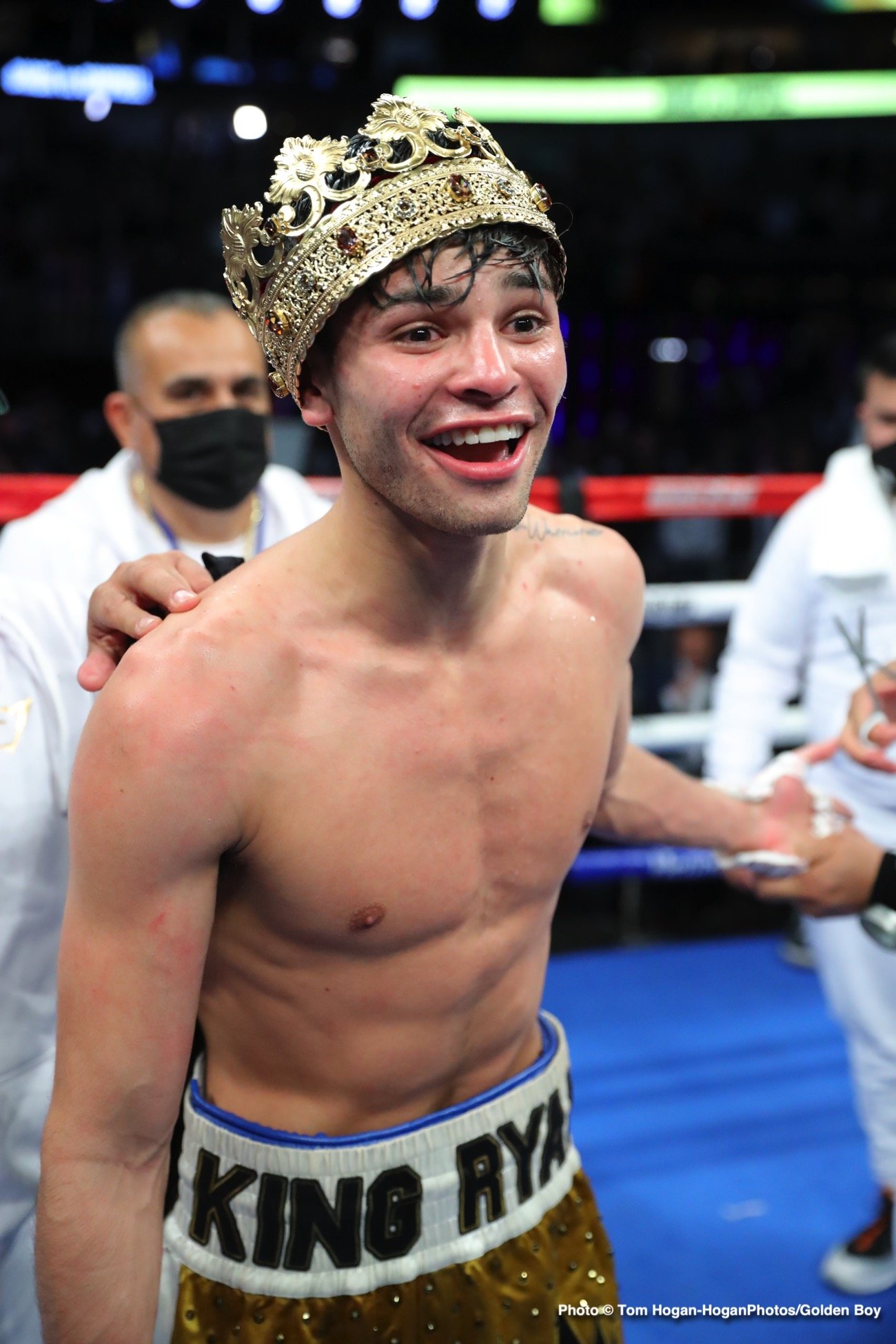 “I think with Ryan; it’s a conflict between being a boxing star and a Tik-Tok star.

“From what I’m hearing, should he not get what he wants, he’s going to explore doing more Tik-Tok and all those other things.

NEWS:   Kambosos on Haney: "He'll definitely be running once he feels the power"

“Excuse me, ‘Lying’ pulled out of the thing [with Manny Pacquiao]. Until he can put some respect on Devin’s name and his name, I won’t call him,” said Bill.

The WBC should consider removing Ryan Garcia from their rankings at 135 if he refuses to fight Haney, but they probably won’t do that.

Ryan is too popular for the WBC to remove him from their rankings, even though it would make perfect sense for them to take that action. Look at it this way.

If Ryan captures the WBC lightweight title, he would be involved in some big money fights, potentially against Teofimo Lopez, Tank Davis, or Vasily Lomachenko. The WBC isn’t going to want to miss out on all the money that will be available if those fights happen.

“I told Devin to slap the s*** out of him [Ryan Garcia],” said Bill Haney. That probably would have jarred him enough to get the cajones to then pursue the fight [with Devin].

“He [Ryan] went on to say, ‘Who has Devin fought,’ and what interest does Devin bring to fighting him. and all this other rhetoric that the people know that it’s not true. We don’t know what to make of Queen lying Ryan Garcia now.

“The interim belt is the belt that challenges the world champion. When you hear Ryan saying what a great fight he had and what a statement fight he had in the Luke Campbell fight, but when you talk about discrediting other opponents such as a legendary future Hall of Famer in Yuriorkis Gamboa, who is way more accomplished than Luke Campbell, who has never won a world title. Also, Gamboa was a gold medalist as well.

“Absolutely, and I don’t just think that it would just be Ryan Garcia. It would probably be a long line of guys that would want [WBC president] Mauricio [Sulaiman] to make the fight happen with Ryan Garcia,” said Bill Haney when asked if he thinks Ryan would go after the WBC 135-lb title immediately if Devin vacated it.

“I believe so,” Bill said when asked if it’s not about the WBC title that is holding Ryan back; it’s who is holding the title [Haney],” said Bill.

That would be interesting to see how Ryan would react to Devin slapping him in the face. Would Ryan take it, or would he return fire at Haney to get him back?

Ryan still likely won’t give Haney a fight no matter what he attempts to do to motivate him into facing him. King Ryan doesn’t want the fight for some reason, and he’s not likely to change his mind unless Devin becomes a superstar overnight.

Tyson Fury frustrated at the delays in the Anthony Joshua clash »