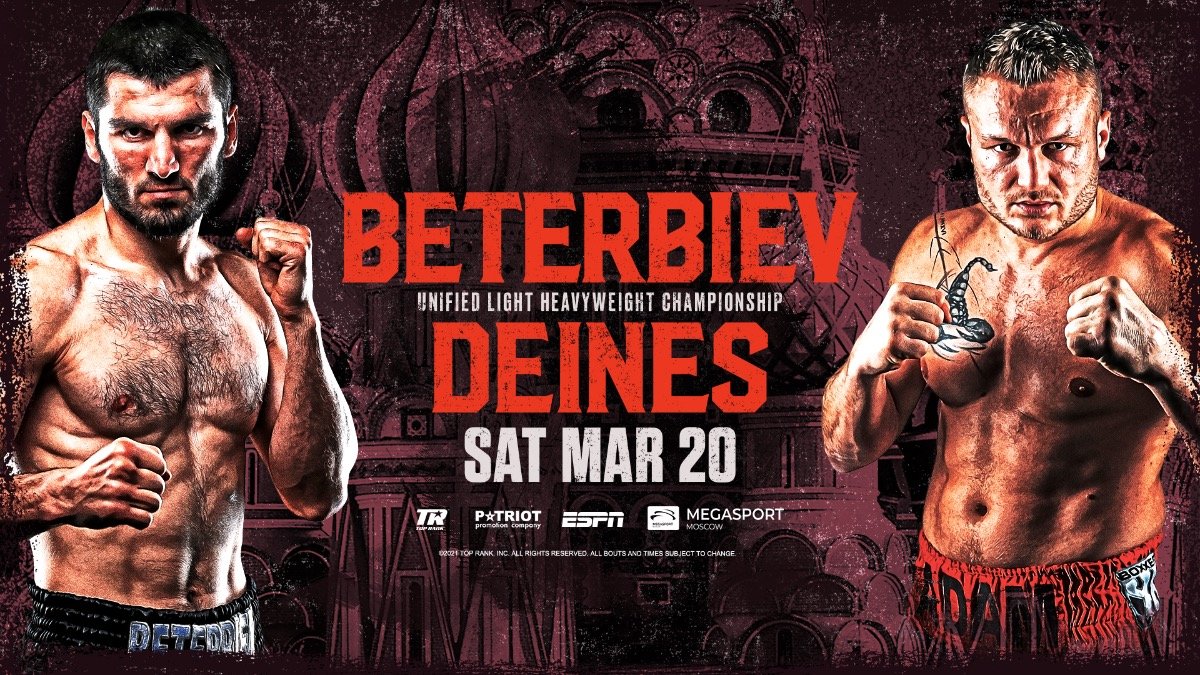 Beterbiev represented Russia at the 2008 and 2012 Olympics and moved to Montreal to begin his pro career in 2013. Nearly eight years after turning pro, he will fight in Russia for the first time, and for the first time since unifying world titles in October 2019 with a scintillating 10th-round knockout over Oleksandr Gvozdyk.

Promoted by Top Rank, in association with Patriot Promotions, Beterbiev-Deines will air live on an ESPN platform, with additional details to follow.

“At long last, Artur Beterbiev will defend his world titles as he looks to kick off his 2021 campaign in devastating fashion,” said Top Rank chairman Bob Arum. “We have big plans for Artur, but he must first take care of business in Moscow.”

Beterbiev said, “I am excited to finally have a date for the fight. Now that COVID-19 and the injury are behind me, I am able to prepare well and put on a great show for boxing fans.”

Beterbiev and Deines (19-1-1, 10 KOs), who is ranked No. 6 by the IBF, have been scheduled to fight twice before. A proposed Oct. 23 date was scuttled after Beterbiev suffered a rib injury in training, and the Jan. 30 makeup date was postponed after Beterbiev tested positive for COVID-19. Deines, who turns 30 on Feb. 8, has won a pair of bouts via stoppage since the lone loss of his career, a June 2019 unanimous decision to Meng Fanlong in Macau, China.

BoxNation and Premier Sports have today announced live coverage of the rescheduled fight between Artur Beterbiev (15-0-0) and Adam Deines (19-1-1) for the unified light heavyweight championship of the world, with the WBC & IBF belts on the line.

This is the fifth planned date after jumping from September 25th to October 9th, the parties involved finally settled on October 23rd, only for Beterbiev to suffer a broken rib. January 30th was agreed after this only for Beterbiev to test positive for COVID with March 20th eventually finalised in a special Russian homecoming.

Artur Beterbiev steps into a ring in Russia for the very first time with an undefeated record of 15 wins, zero loses and 0 draws, 15 of those wins coming by the way of knock out. Beterbiev has represented Russia at the 2008 and 2012 Olympics before moving in 2013 to Montreal to pursue his professional career. German Adam Deines will make his way to the ring with a record of 19 wins, 1 loss and 1 draw, with 10 of those wins by knock out.

Beterbiev commenting on the fight in January, “I am excited to finally have a date for the fight. Now that COVID-19 and the injury are behind me, I am able to prepare well and put on a great show for boxing fans.”

Live broadcast of the event from Moscow, Russia begins at 5pm GMT on BoxNation and Premier Sports 2 with the main event expected at approximately 8pm. The co-feature not expected before 7.05pm sees an international welterweight bout between former WBA “regular” welterweight champion Alexander Besputin (13-0, 9 KO’s), who has been inactive since November 2019 v Argentinian Maximiliano Ricardo Veron (12-3, 4 KO’s).

New customers signing up to watch this event can do so easily via the Premier Sports website. More upcoming fights for April are expected to be announced shortly.

Srisaket Sor Rungvisai vs. Kwanthai Sithmorseng on Saturday on Dazn »