By Barry Holbrook: Anthony Joshua admits that he was upset at seeing Dillian Whyte lose to Alexander Povetkin last August in their fight at the Matchroom Boxing headquarters. Joshua wanted to see Whyte (27-2, 18 KOs) win the fight so that he could progress to the next level to challenge for a world title as the WBC mandatory.

AJ is happy now that Dillian, 32, will get a chance to come again this Saturday night on Sky Box Office and DAZN at Gibraltar.

Joshua believes that Whyte’s motivation to avenge his loss to the 41-year-old Povetkin will be enough to carry him to victory this time around.

Of course, it doesn’t hurt that Povetkin almost a year older now and coming off a bad case of COVID 19. We don’t know how much the illness will affect Povetkin’s game.

It’s hard enough for non-athletes to recover from an illness a serious as COVID. Still, it’s difficult to fathom for a professional boxer to try and compete at the highest levels a mere three months after being ill.

Joshua was upset when Whyte lost to Povetkin

“I was upset for Dillian, even I wanted to punch him up,” said Anthony Joshua to Sky Sports News. “I was upset because he’s [Whyte] in my industry, and he was one step away from competition for a world title.

“Nevertheless, he’s got a rematch, and if you fail the first time, you dust yourself off, and you go again. This is his second opportunity to do it again. I wish him [Dillian] well.

“I was shocked the first time, but I was upset for him for what was yet to come. Remember, I was talking about that pot of gold, and Povetkin landed a pitch-perfect punch?

“A punch-perfect punch. It was spot on, and it was unfortunate, but one thing about life or era where there’s no room for failure,” said Joshua about the left uppercut that Povetkin knocked out Dillian with in the fifth round.

Pictures tonight of Gibraltar 🇬🇮 (from the @batcam team) ready to welcome the fighters ahead of a huge night on Saturday! #PovetkinWhyte2 @skysportsboxing @daznboxing 🔥@FabianPicardo pic.twitter.com/QeLh5qs0aY

It was a good shot that Povetkin hit Whyte with to knock him out in the fifth round on August 22nd, but you could see it coming in watching the fight pattern.

Povetkin was tagging Whyte with a lot of punches to the head and body that were doing damage.

What made it easier for Povetkin to land his powerful shots was the way that Whyte left himself open when throwing his punches.

Whyte was so preoccupied with trying to score a knockout that he left himself open for an uppercut in fifth, and the Russian fighter took full advantage of it.

“Interviews are the same because you don’t want to say the wrong thing,” Joshua discussing the fact there’s no room for errors.

“People can’t perform and be creative because creativity leads to experience, which leads to trial and error, and there’s no room for failure anymore.

“So the good thing with Dillian is he tried, and he failed, but he never lost heart. No matter what people said about him, he’s ready to go again,” said Joshua.

Whyte is one of those types of fighters that will try and come again no matter how many times he gets beaten.

That the way he is. Joshua shouldn’t be surprised that Whyte has pushed for an immediate rematch with Povetkin rather than going in a different direction because he’s got too much pride not to try and make things right.

If Whyte loses again, it’s going to be hard for him to get another chance because he’s getting up there in age, and there are a lot of younger fighters there waiting for their shot.

Whyte’s not going to be able to force a third fight with Povetkin if he loses on Saturday. He’s got to take advantage of the opportunity he’s being given to fight Povetkin a second time because if he weren’t promoted by Eddie Hearn’s Matchroom, he likely wouldn’t be getting this chance.

Dillian’s strength will lead to victory

“Within the space of two or three months, he’s going to be ready to go in again,” Joshua said about Whyte’s rematch with Povetkin.

“I’ve got a lot of respect for that because it’s easy to kind of curl up in a ball and hide away because there’s so much negative energy towards failure these days, but what he showed in his true strength.

“That’s why I think it’s going to be a really good fight. The second time around, even though I respect Povetkin so much, he’s an Olympic gold medalist, world champion; he’s only lost to [Wladimir] Klitschko and me.

“Dillian, the strength that he’s had to pick himself up, takes some doing. That kind of energy to take into the rematch will be the reason for his victory,” said Joshua.

Whyte looked a little shell-shocked in an interview with Matchroom this weekend. You could tell that he’s nervous and showing signs of worry about what could happen to him if he fails to win. 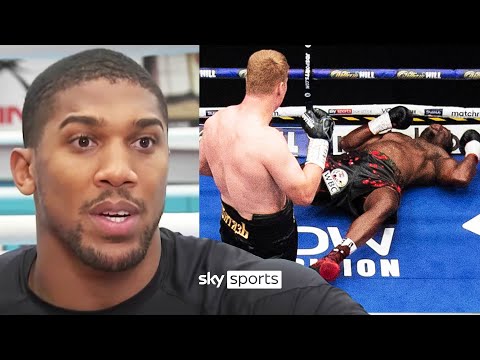