By Matt Lieberman: Maxim Vlasov is confident that he’ll defeat the Joe Smith Jr this Saturday to win the vacant WBO 175-lb title that Canelo Alvarez recently gave up. Vlasov vs. Smith will be shown on ESPN on Saturday, February 13th at 10 PM ET/7 PM PT.

Vlasov has studied the 31-year-old Smith’s past fights, and he deems him as a straightforward, simple fighter who tries to use his strength to overpower his opposition. 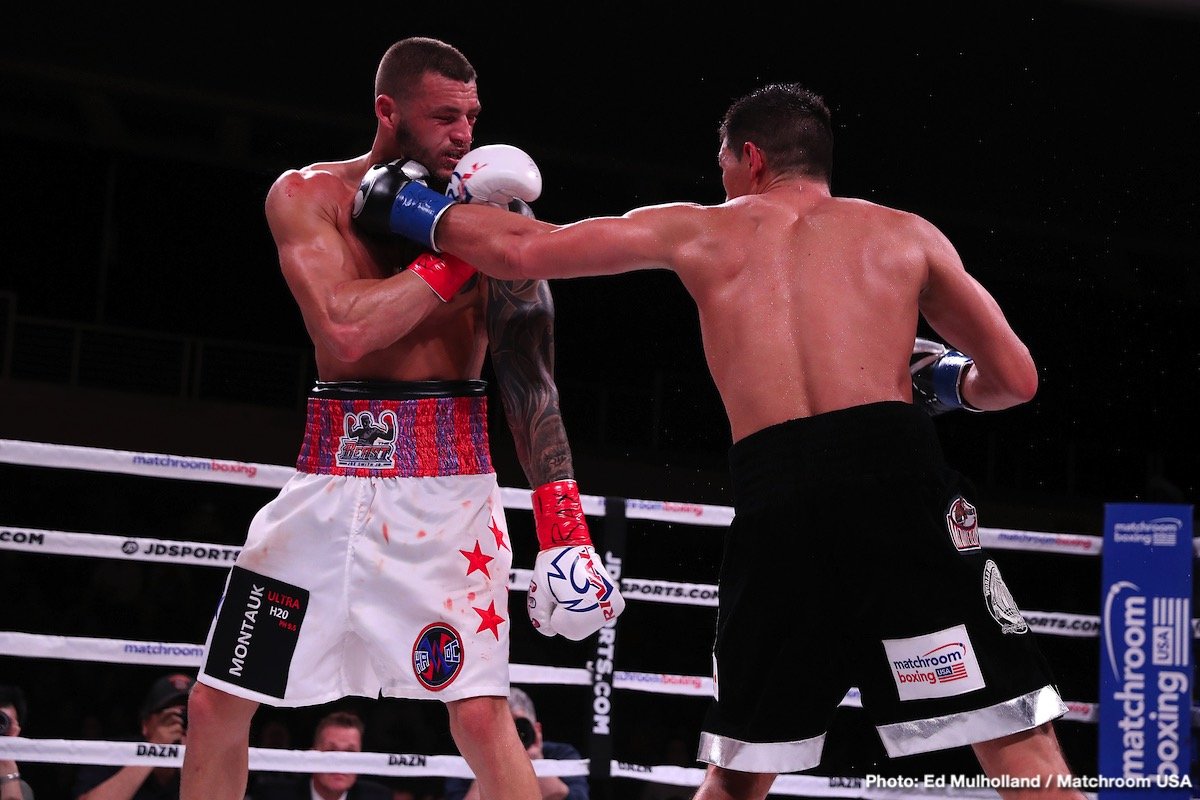 “I don’t think Joe Smith did anything, in particular, to win the fight with [Eleider] Alvarez. It’s not as if he presented any technique or did anything outstanding or anything outrageous.

“I think Joe Smith was more offensive and more aggressive during the fight. The mistakes Alvarez did allowed Joe Smith to advance and outbox Alvarez.

“Smith is a very, very basic fighter, a very simple fighter and predictable. So he’s always the same. So that’s why I believe the mistakes of Alvarez allowed Joe Smith to win the fight,” said Vlasov.

One can see from watching Joe Smith’s fights that he’s a guy that is at his best when he’s hurting his opponents and scoring knockouts.

He’s not someone that uses a lot of skills to win. He’s a George Foreman type of slugger than wears his opponents down with heavy shots and eventually stops them.

It would be a mistake on Smith’s part to try and change his game all of a sudden to become more of a boxer and less of a slugger. 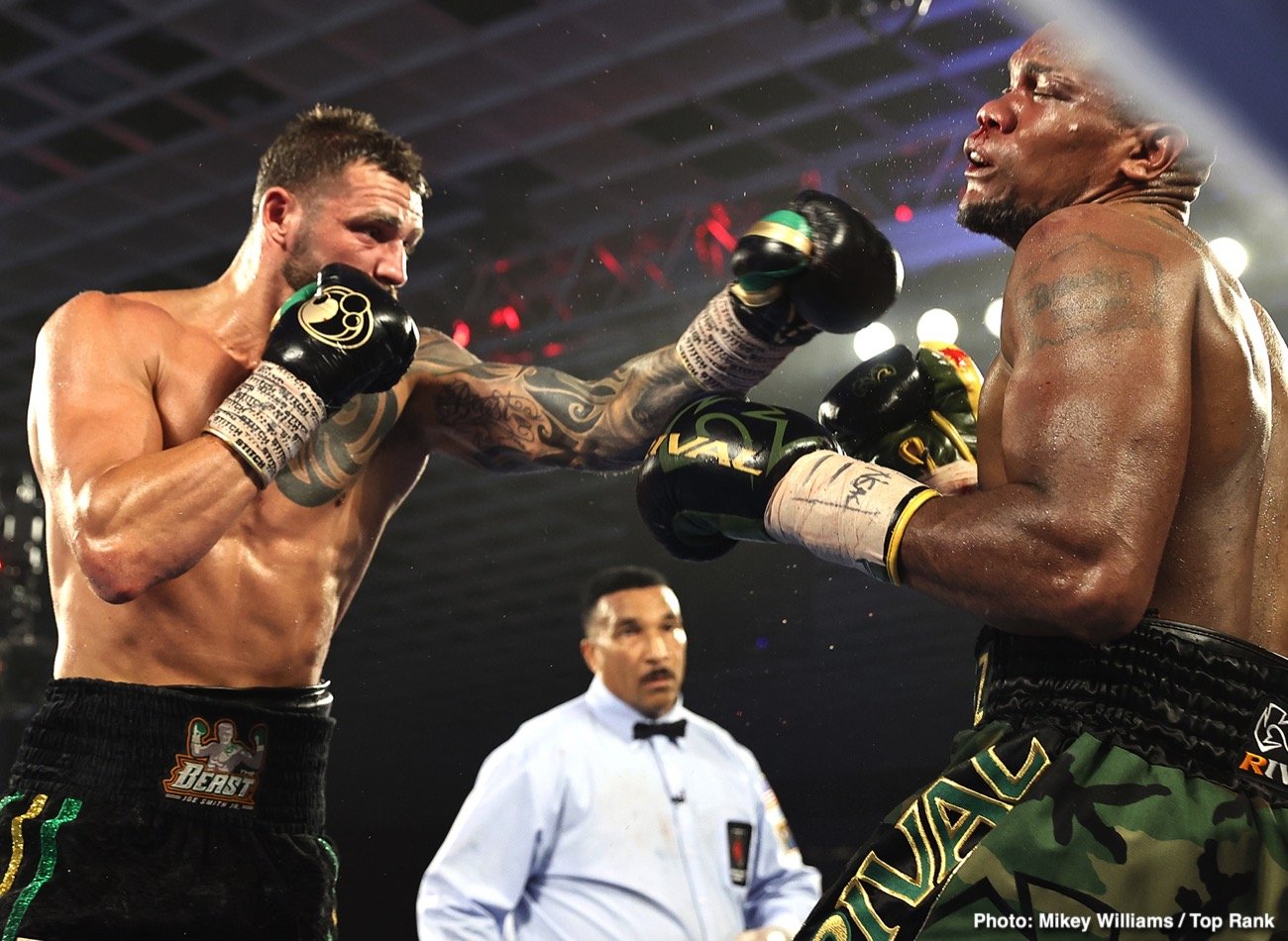 “I would suggest that Joe Smith not look forward too far,” Vlasov said in reacting to Smith, saying he would like to fight Bivol and Artur Beterbiev in unification fights.

“He has to box past me first. In this particular fight with Joe Smith, I am rather the underdog, but I’m going to surprise everybody. Yes, then I might think about my next fight and what to do next.

“I’m going to look to fight these obvious champions, Artur Beterbiev and Dimitry Bivol. This is my next step. Right now, I’m fully focused on this upcoming fight with Joe Smith Jr,” Vlasov said.

WBA light heavyweight champion Dmitry Bivol outclassed Smith in beating him by a dominating 12 round unanimous decision in 2019.

The way that Bivol fought, he toyed with Smith and took away his power game.

Bivol had problems in the contest when Smith hurt him with a shot after the bell in the later rounds. Bivol recovered well in between rounds and continued to dominate the contest.

“First of all, cruiserweight was not my original weight,” continued Vlasov. “I started as a middleweight fighter. Later on, yes, I tried to move up to a category, but it was rather an accident.

“So I attempted to get the WBO title at cruiserweight. However, I didn’t think this was a long-term objective for me, and I didn’t feel as comfortable as I did at light heavyweight and middleweight.

“If I take this extra weight off me, I can be more interesting and a better fighter. So I’m sure I will continue to fight at light heavyweight and middleweight rather than cruiserweight because cruiserweight fighters are larger fighters, and it’ not what I want to do in the future.

“I’m not going to fight at middleweight. It was the beginning of my career only. So it will be light heavyweight only. I would like to say that I am happy that I have this opportunity to fight with Joe Smith.

“And I consider myself the winner upfront. I feel it’s on, and I understand the fight will be tough. I’m happy. I’m happy to be here; I’m happy to fight. As I said before, I will surprise you all,” said Vlasov.

Smith and his management are pleased that Vlasov predicts victory, as they want him to be overconfident for this fight. They feel this will benefit them if Vlasov is already counting the night as a victory for him.

Teofimo Lopez: I earned my A-side, they haven’t »