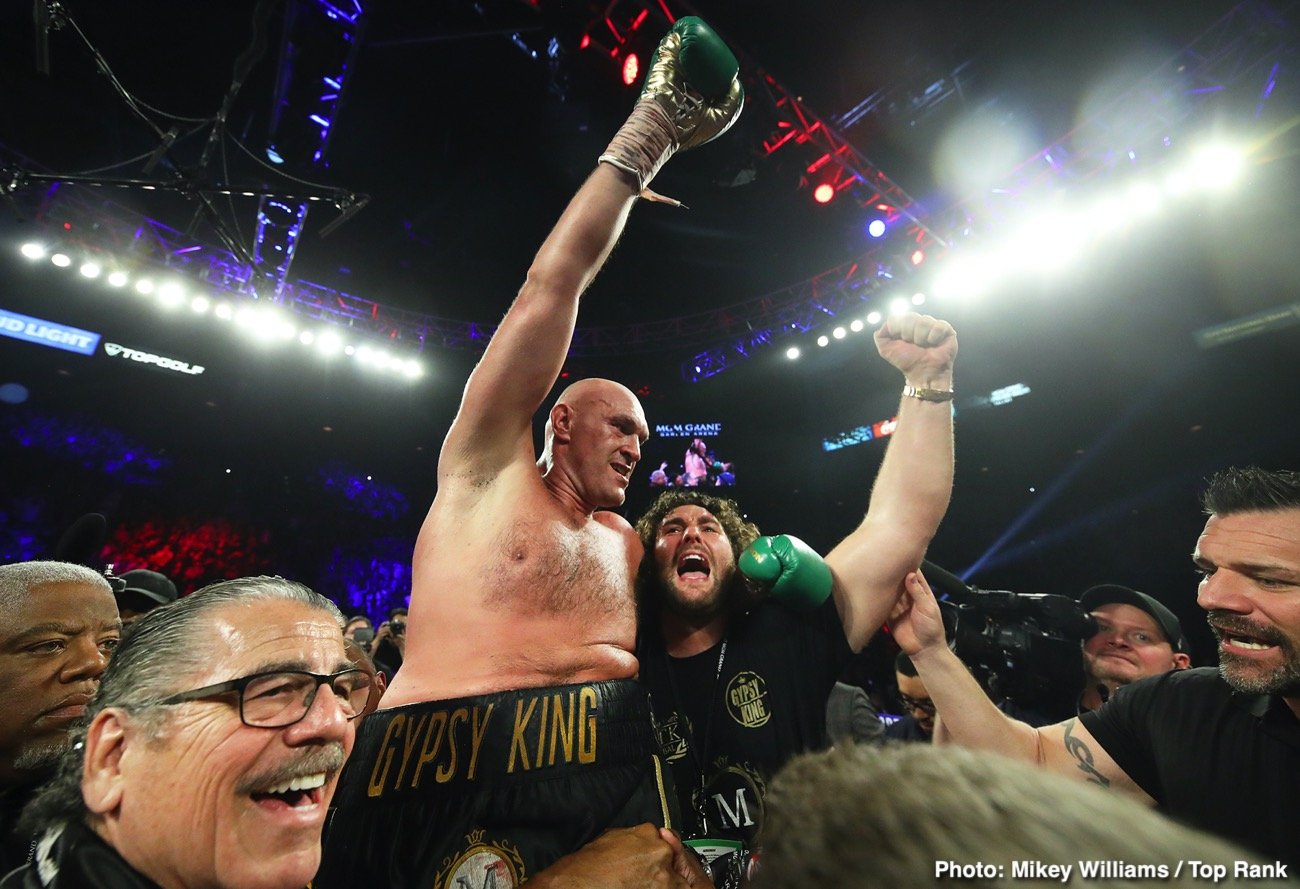 By Charles Brun: Tony Bellew doesn’t think too much of Tyson Fury’s best career victory over a then 38-year-old fading former heavyweight champion Wladimir Klitschko in 2015. Bellew calls it the “worst” and “dullest” performance he’s seen in a heavyweight title fight.

Fury won the fight by the scores:

Afterward, Fury made a big production about the win, saying he’d accomplished all he wanted from the sport by beating the top heavyweight Wladimir.

The sad reality is that the version of Wladimir that Fury did beat wasn’t the same guy that had ruled the division with an iron first for a decade. Fury beat an old guy that looked disengaged mentally from the outset, and it wasn’t because of anything he was doing inside the ring. Wladimir looked like he didn’t want to be there.

Fury spoiled his way to an ugly close 12 round unanimous decision against Wladimir, who didn’t look like the same fighter he’d been during his prime. Without his trainer Emanuel Steward, the 6’6″ Wladimir was rudderless, not throwing punches and giving rounds away. The drive and passion that we’d seen from Wladimir during his years with Steward as his trainer was gone in that fight.

When Wladimir finally did start throwing punches in the championship rounds, he dominated Fury with his power and skills.

You could see what Wladimir would have done to Fury if he’d fought aggressively from the outset. It was obvious that Wladimir was a better talent than Fury, but he lacked the aggression without Steward in his corner.

Fury won the fight, but only because Wladimir looked unmotivated and completely disinterested. The big Ukrainian wasn’t the same fighter he’d been in his 20s and early 30s.

But even at 38, Wladimir would have easily won the fight if he’d had his late trainer in his corner. Wladimir had the power and hand speed advantage over Fury, who mostly scratching at the air with his weak shots the entire fight.

“If Fury didn’t get that decision [against the 38-year-old Wladimir Klitschko], would that have been a big shock? I’ve seen bigger robberies in Germany,” said Tony Bellew to iFL TV on Fury’s ugly 12 round decision over past his prime Wladimir.

“It was a close fight. I think Fury won, but he beat him in the dullest, worst performance of the heavyweight titles I’ve seen.”

Wladimir wanted to fight Fury a long time ago in a rematch, but the ‘Gypsy King’ fell apart after the defeat, celebrating a little too much. Unfortunately, boxing fans never got a chance to see what would have happened in a rematch. We can only guess that Wladimir would have come out with more motivation and knocked Fury out.

“If I was teaching a kid to fight, I don’t want to make him like Anthony Joshua, I’m sorry,” said Bellew.

“I want to make him like Tyson Fury because he takes such little damage. The art of boxing is to hit and not get hit. Fury gets hit a lot less than Joshua.”

It’s kind of hard to make the average kid like the 6’9″ Fury because there aren’t too many youngsters with that kind of size that are interested in boxing.

Really, without Fury’s size, would he be a top fighter? I don’t think so. If you take away Fury’s height and reach, you end up with Hughie Fury, and that’s not going to cut it in the heavyweight division.

It’s not easy to find fighters with the size, speed, and power of Joshua (24-1, 22 KOs). How are you going to find someone like that? But if you could find someone like Joshua, you’re better off than if you big guy with no power like Fury.

A heavyweight like Joshua has a better chance of making massive money and sticking around the sport longer than a tall lump, who can’t punch and uses his size to rough up his opponents.