By Sean Jones: Teofimo Lopez Jr revealed on social media on Sunday that his promoters will be sending contracts out to Devin Haney and George Kambosos Jr to pick an opponent for his next fight in late April or early May.

The contracts have NOT been sent out yet to WBC lightweight champion Haney and IBF mandatory Kambosos Jr (19-0, 10 KOs).

Some overzealous posters on social media are mistakenly reporting that Teofimo has already sent out the contracts, but that’s not the case. Teofimo clearly says, “We’re going to throw contracts at Haney” and Kambosos.

That’s something that will be done soon, obviously, but Teofimo isn’t saying when the contracts will be sent. But even when Teofimo’s management does send out the contracts, it doesn’t mean he’s going to fight either guy.

Teo is talking about wanting to be A-side for a fight with Haney, and it’s unclear whether he’ll agree to the money.

It’s widely believed that Teofimo’s promoters at Top Rank have no interest in matching him against Devin Haney (25-0, 15 KOs).

One way of them making sure the fight with Teofimo doesn’t happen is to give Devin a lowball offer, which he’ll reject.

Teofimo to fight in April or May

“The end of April the beginning of May is my fight date,” said Teofimo Lopez on social media. “Well, my fight month. Against who?

“Whatever we get back with, as long as we find a medium and we all agree to the terms, then you’re going to see a fight.

“They’re all going to know. Why do you think Devin said April? Everything is already falling into place, ladies and gents.

“So, the end of April, the beginning of May,” said Teofimo on when he’ll be fighting.“Me and Bob Arum are talking back and forth, and we’re talking with the other promoters, we’re making these deals work. we need a fight, yes.

“Ain’t nobody ignoring Devin. All of you are crazy. This COVID s*** got to y’all. All these guys had the opportunity to fight Loma.

“You know why they didn’t do it? They wanted the financial part. I don’t blame them., you got to get paid. But when I say I’m the best, you best believe it and I show it,” said Teofimo.

It’s a given that Teofimo Lopez will be fighting Kambosos, not Haney. You can argue that Teofimo threw Haney’s name out there because his fans have been criticizing him heavily for fighting an easy mark in Kambosos instead of one of the talented 135-lb fighters.

Kambosos looked horrible in winning a decision against over-the-hill former IBF featherweight champion Lee Selby on October 31st. Selby, who isn’t a big puncher, and he appeared to hurt Kambososos at one pont.

Teofimo: Ryan Garcia vs. Tank Davis is NOT happening

“You remember that time when they said they were going to spar? It never happened. It’s the same thing here. Those guys aren’t going to fight each other. Not yet at least. Their promoters won’t allow it.

“[Ryan] Garcia, Tank, Kambosos, everybody, man,” said Teofimo about who he wants to fight. “The thing is, who do they want to fight next?

“Y’all be asking the wrong guy the questions. Don’t worry about me too much about who I’m going to fight next,” said Teofimo.

With the money available for WBA ‘regular lightweight champion Gervonta ‘Tank’ Davis and Ryan Garcia, they will likely be fighting next.

Lopez with pressure on him to pick a good opponent

Teofimo comes across as spiteful in downplaying the likelihood of the Tank vs. Garcia fight taking place. You can understand why Teofimo would have nothing good to say about that fight.

Tank (24-0, 23 KOs) and King Ryan (21-0, 18 KOs) will attract all the attention for months when their fight is announced, and Teofimo is going to be ignored, especially if he chooses to face Kambosos next.

Teo has got to try and keep up with the competition by facing someone good enough for the fan to pay attention to his fight.

He’s not going to do that if he fights Kambosos, a guy that most casual boxing fans in the U.S have never heard of. I know Teofimo wants to keep his IBF belt because he can use it to validate his claim that he’s #1 at 135.

Holding onto the IBF title will hurt Teofimo’s career because he’s going to get stuck fighting Kambosos, and the fans won’t hear about this match.

The fights that the casual boxing fans find out about involve popular guys and champions with talent. If the IBF doesn’t let Teofimo bypass Kambosos to take on Haney, he can always vacate the title.

“Me and [Jose] Ramirez, I’ll slap that fool just for saying stupid stuff, his punch-drunk a**,” Teofimo continued. “Jose Ramirez, you a punch-drunk mother f****. You going to get this work. 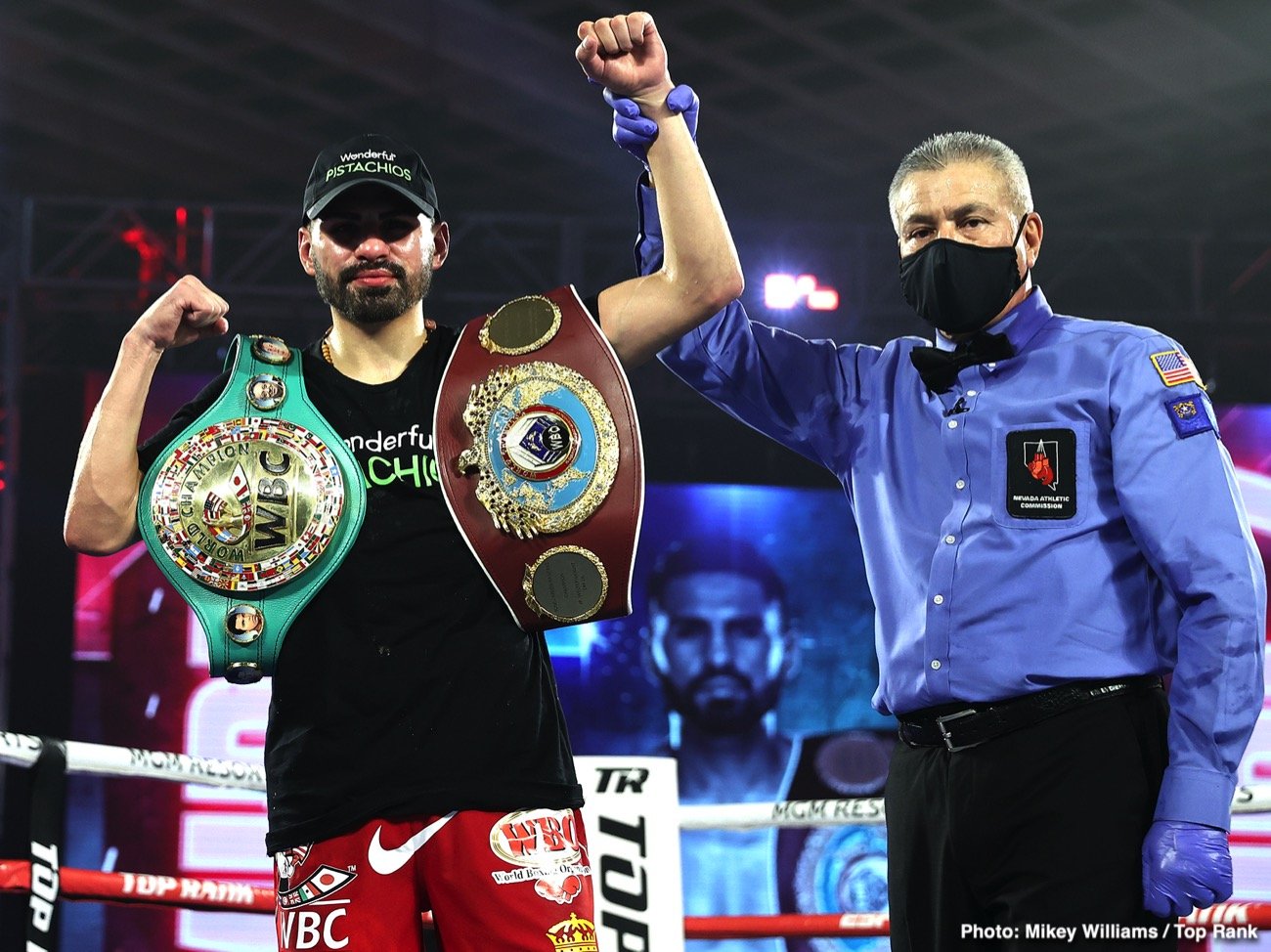 “None of these guys are ready. They think they’re day, but they ain’t ready. Trust me. Loma thought he was ready. He wasn’t ready,” said Teofimo.

It sounds like Teofimo is already angering WBC/WBO light welterweight champion Jose Ramirez before he’s even moved up to that weight class.

Teofimo should keep quiet and focus on fighters in the 135-lb division. There’s no point in Teofimo trash-talking a fighter that he has no intention o fighting anytime soon, if ever.