Results: Ryan Garcia comes off the floor to KO Campbell 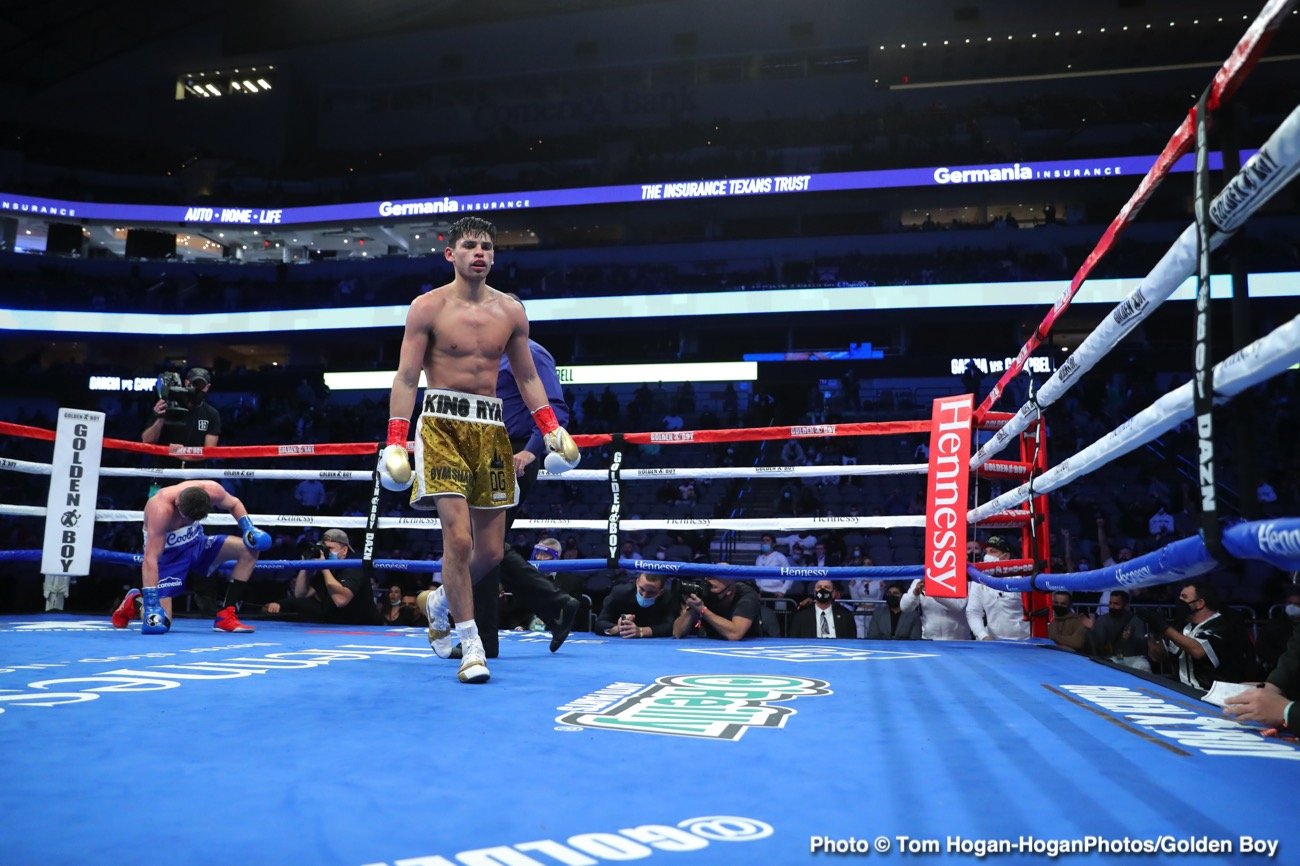 By George Goddiess: Ryan Garcia headlined the first major card of the New Year with a liver shot knockout over veteran contender Luke Campbell in the seventh round.

Amid the fanfare and cheers, it was Garcia who had to dig deep early in the fight. Garcia, known for his power, found himself on the canvas for the first time in his career in the second round.

Campbell placed a perfect leftover the right hand of Garcia, and the young prospect fell back to the canvas. He took his count and had to survive with plenty of time remaining in the round.

Campbell showed the poise of his nickname “Cool Hand” but in hindsight may have given the young fighter all of the time to clear his head and get back into the fight.

In the post-fight interview, Garcia admitted to being dizzy from the blow, and Campbell possibly misjudged how hurt his opponent was or felt the same opening would come back for him to capitalize on.

Campbell began the third round tentatively, working on using his right hand defensively to block Garcia’s left hook from being effective. In fact, Campbell did a pretty good job in neutralizing the left hook throughout much of the fight.

His front right hand was kept high and prevented the signature shot of Garcia from making the kind of stamp it made on Francisco Fonseca back in February.

Where the left hook was negated, the right hand down the middle from Garcia made its mark often in this contest. In the opening round, Garcia came right after Campbell and walked him into a corner garnering excitement from the crowd.

While he had his man cornered, Garcia opted for the jab right cross to open the night, and he stuck with the punch consistently. Campbell attacked with a sweeping left hand to the head and body and was frequently met with his straight right hand.

The fight was patient in pace and highlighted with offensive bursts from Garcia. Campbell would attempt to turn Garcia and score with his left hand to the head and the body and did his best work when he could back Garcia up. 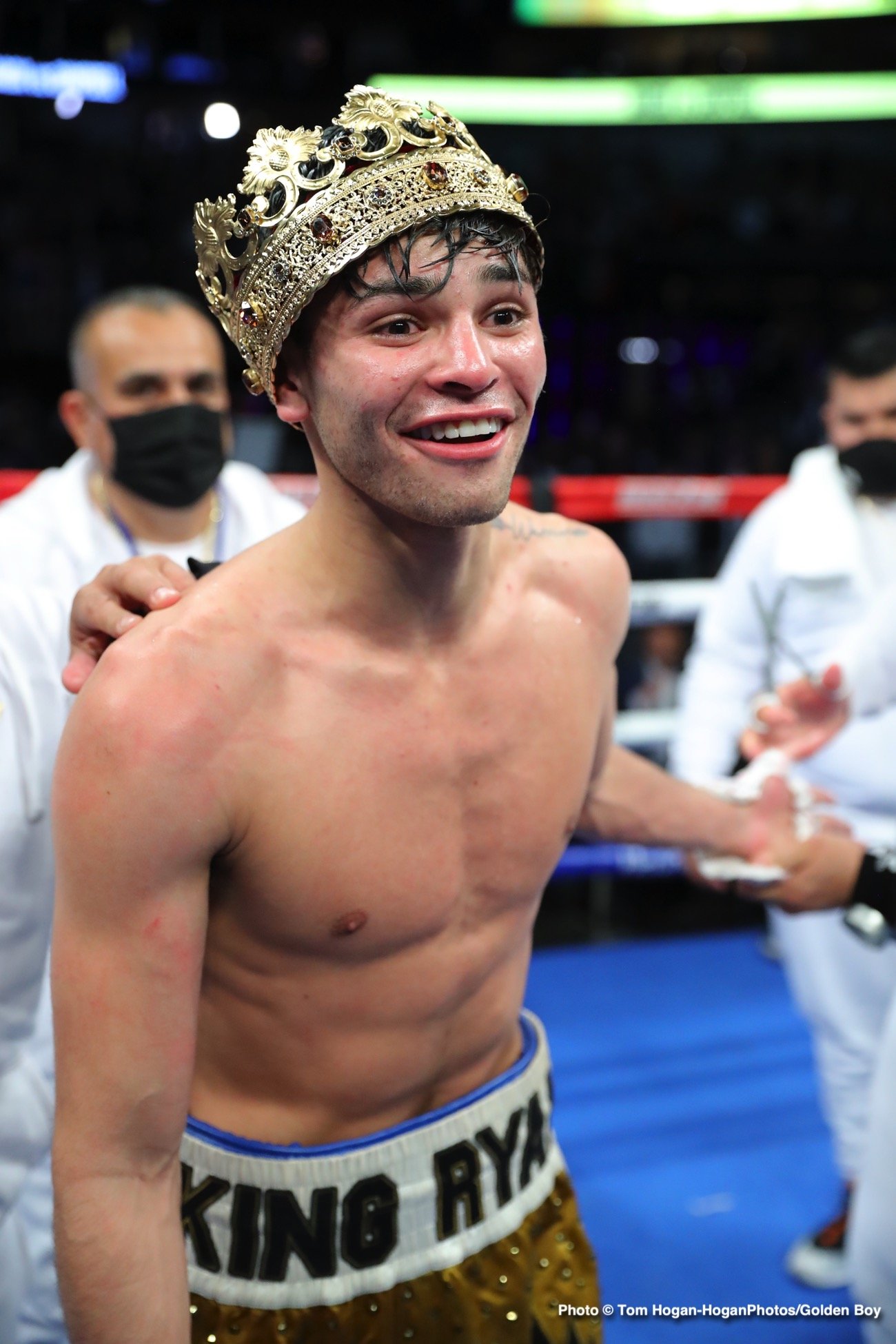 Despite Garcia’s hand speed, his feet do not often match the demonstrations he puts on with his combinations. Garcia spent much of the fight completely flat-footed and looked uncomfortable when Campbell pushed him backward.

Garcia still continues to remain tall and keeps his head on the centerline. He is a young fighter at twenty-two but is the WBC Interim Lightweight Champion and has fights with WBC Champion Devin Haney and WBA Regular Champion Gervonta Davis as his targeted opponents for 2021.

And he will need to address these issues with trainer Eddie Reynoso in the gym to defeat these other elite-level talents; he has made the call outs and will likely not get a soft touch to work on these things.

Campbell opened up the fourth round with a solid right hand jab that caught Garcia flush on the face. A left from Campbell was called low by referee Laurence Cole before Garcia opened up with a right hook that set up his left hook.

Campbell later in the round ducked right under a left hook by Garcia in a nice display of defense but despite being well out of position he was not countered. 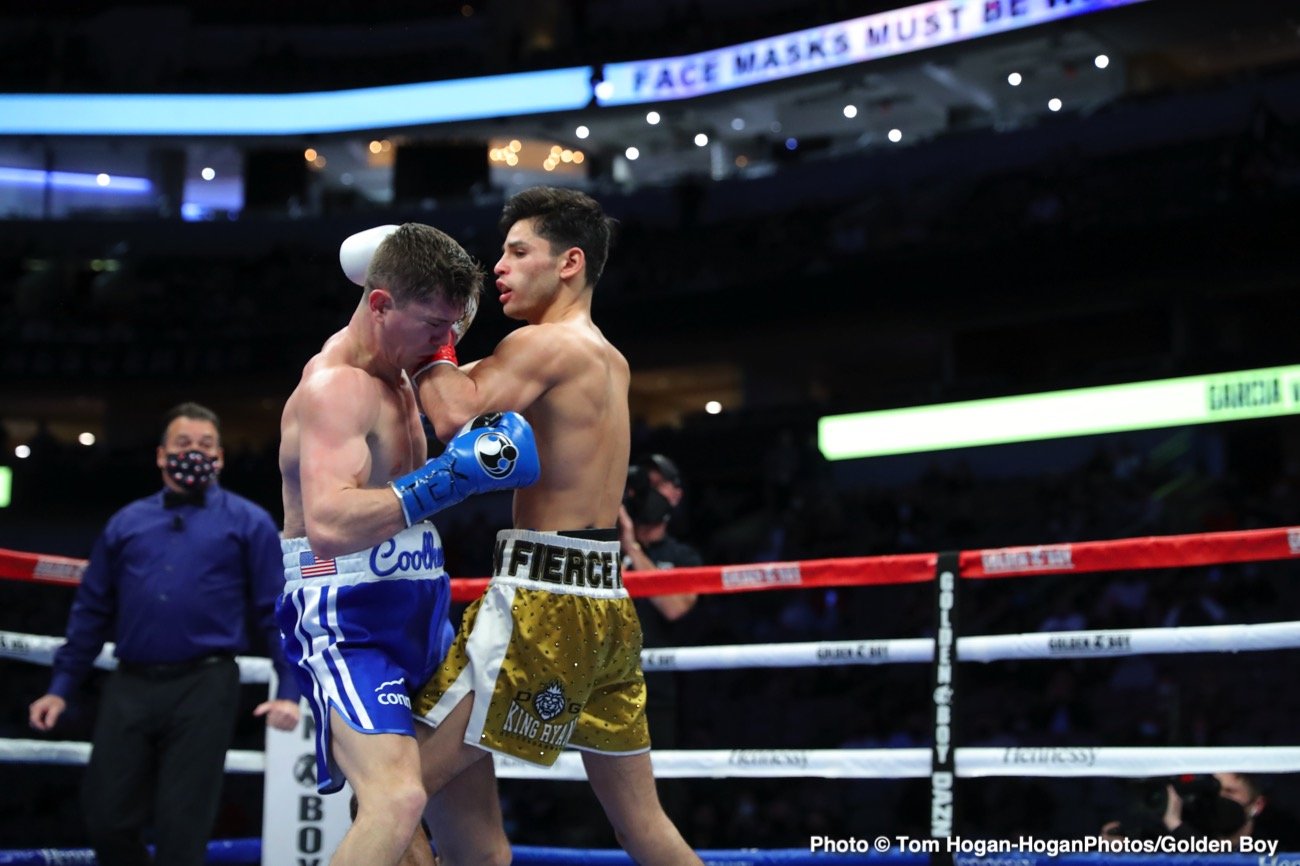 The fifth round began with Campbell catching Garcia with a short counter before Garcia was called for a low blow. Garcia struck again with another right cross to the head but Campbell rode it well and came back with a shot of his own.

Momentum swung at the end of the fifth as a left hook turned Campbell to the crowd and he was held up by the ropes as Garcia celebrated. Completely vulnerable, the bell sounded and saved Campbell from a possible technical knockout in the moment.

Garcia pressed his attack early in the sixth but Campbell had recovered from the blow at the end of the previous round. Campbell landed a solid jab with his back to the ropes and showed that he was still in the fight. 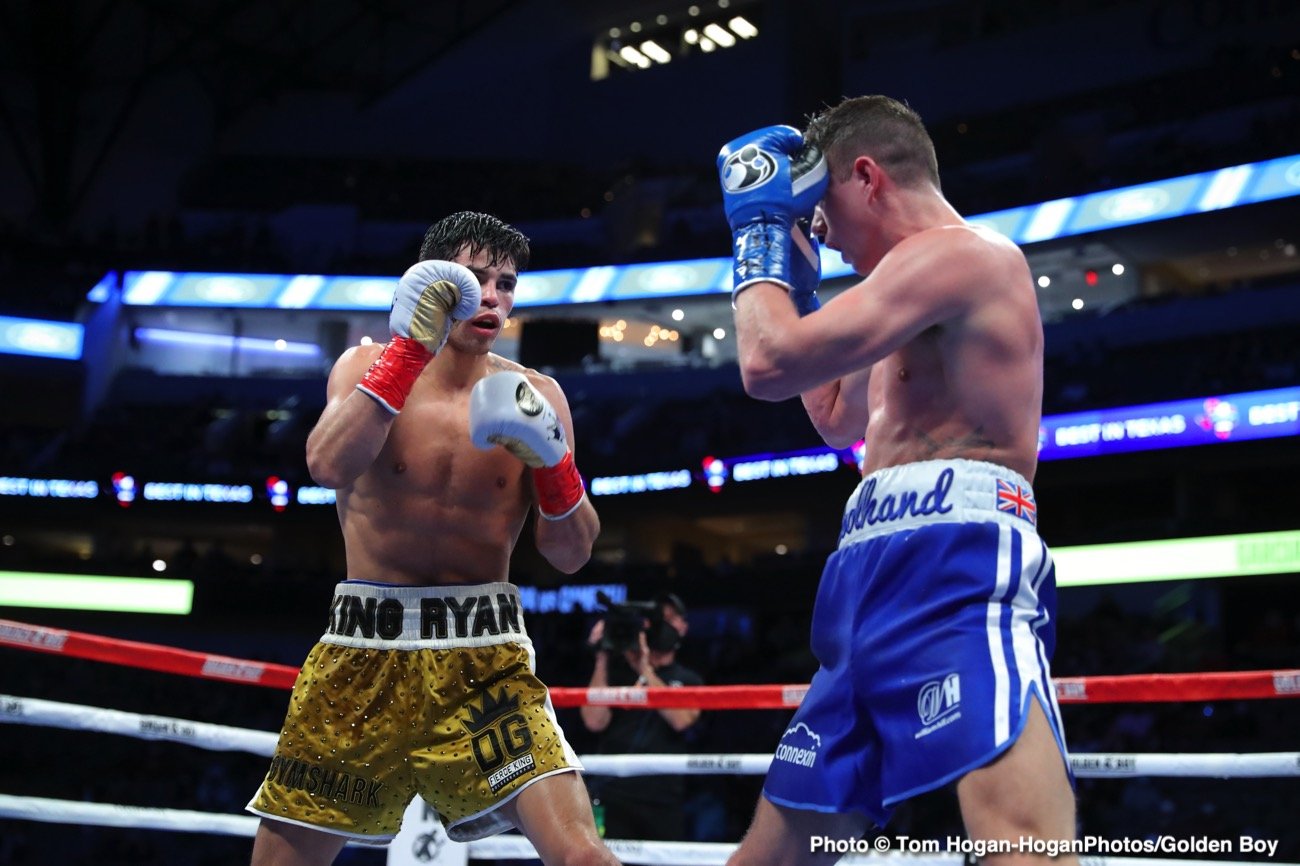 Garcia was starting to build momentum with his combinations and moved forward as the counter opportunity that Campbell was sitting on hadn’t and possibly wouldn’t return.

The seventh round saw Campbell come out more aggressively as he tried sweeping his left hand around the guard and came forward. This attack left his body wide open and Garcia struck with a left hook to the liver and it was Campbell’s turn to visit the canvas.

Cole counted as Campbell’s face showed the distress of the shot and he could not beat the count.

The knockout registered at one minute and fifty eight seconds of the seventh round and Garcia immediately jumped into his corner men’s hands as they lifted him up. The young crowd cheered for their favorite fighter as he made a statement in the ring with the victory.

Tonight Garcia had a scare but overcame in a fight that some felt was him biting off more than he could chew in the two time title contender Campbell. 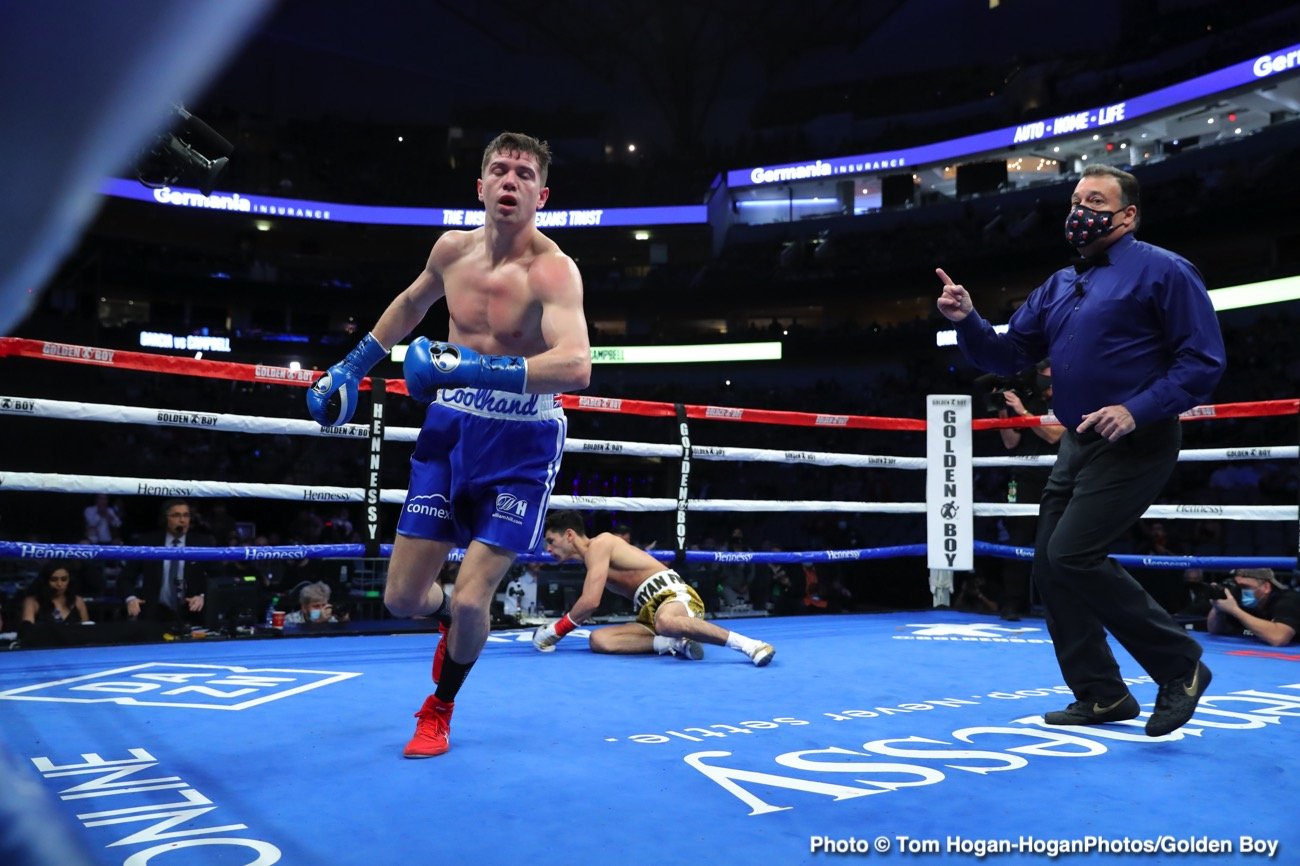 As mentioned above there was the knockdown and some technical improvements with head movement and footwork but his performance was mostly positive.

He was winning the fight, showed poise despite the knockdown and put his offense out there on full display. And he pointed to his Warrior tattoo and said that his warrior spirit helped him overcome the adversity to win and to silence critics that said he is just a social media boxer.

He called out Gervonta Davis first but also indicated interest facing Devin Haney who was present in the crowd. Despite the crowd cheering for Tank to be next, Haney holds the WBC title and fights on DAZN which makes their fight simple to make in modern day boxing politics. 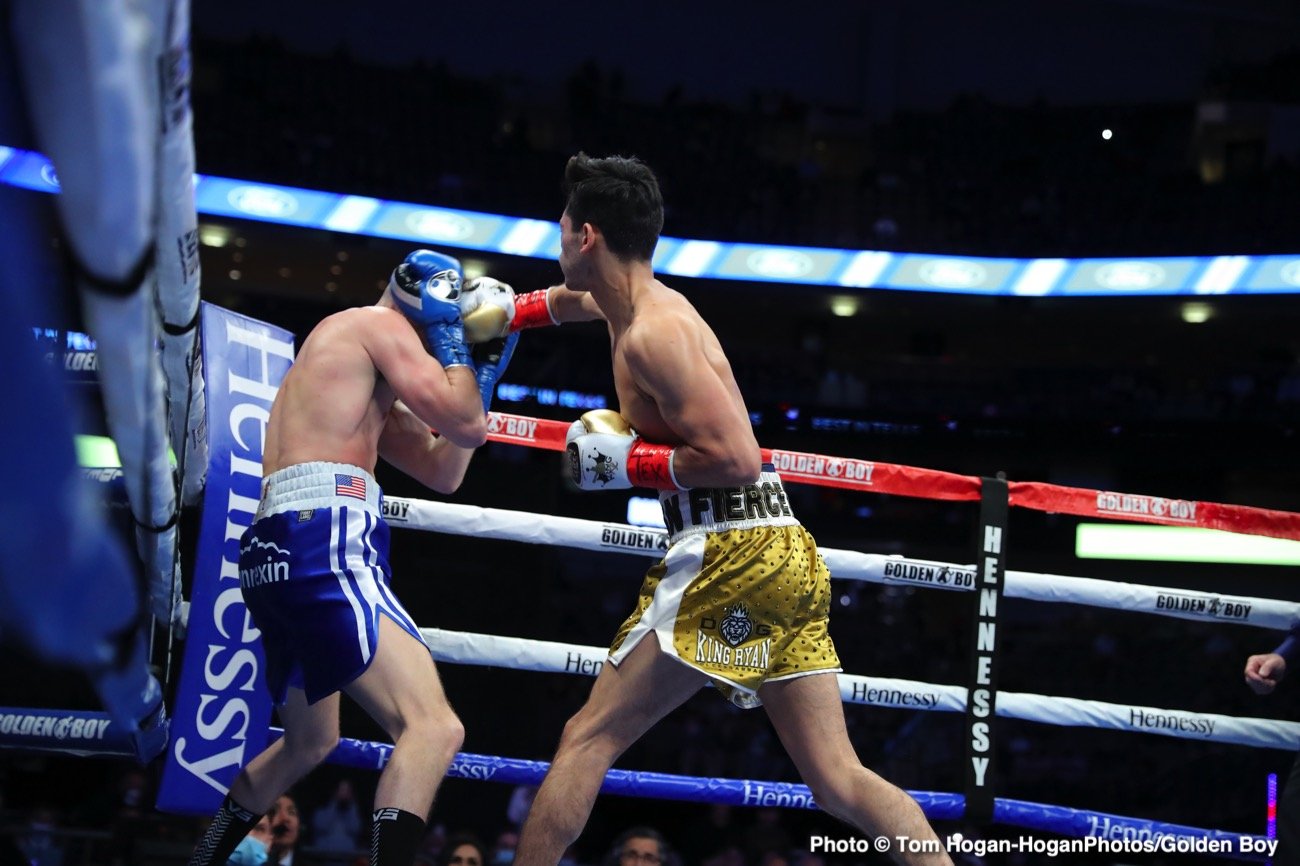 At lightweight there are two interesting draws in Garcia and Teofimo Lopez who did very good numbers on ESPN in his upset over Vasiliy Lomachenko.

Factor in the young undefeated talent hovering around the division including Garcia, Lopez, Haney, Davis and Shakur Stevenson mixed in with other talented fighters like Gary Russell Jr. Joseph Diaz and Miguel Berchelt there are some great matchups to be made in and around the division.

I think a lot of fighters will want to target Ryan Garcia immediately for two reasons. First, he is a draw and beating him would garner a lot of attention from new fans and young ones for that matter who are getting into boxing behind Garcia.

Second, he shows vulnerability as he is only twenty-two and visited the canvas tonight. Fighters in and around the division will likely try to cash in on Garcia while he is still young and developing, we don’t know how far he is going to go but he is in good hands with Reynoso.

For more takes and opinion based boxing writing please visit https://jerseygeorgesboxingblog.com/ and subscribe. To contact the author email jersey.george.boxing@gmail.com. 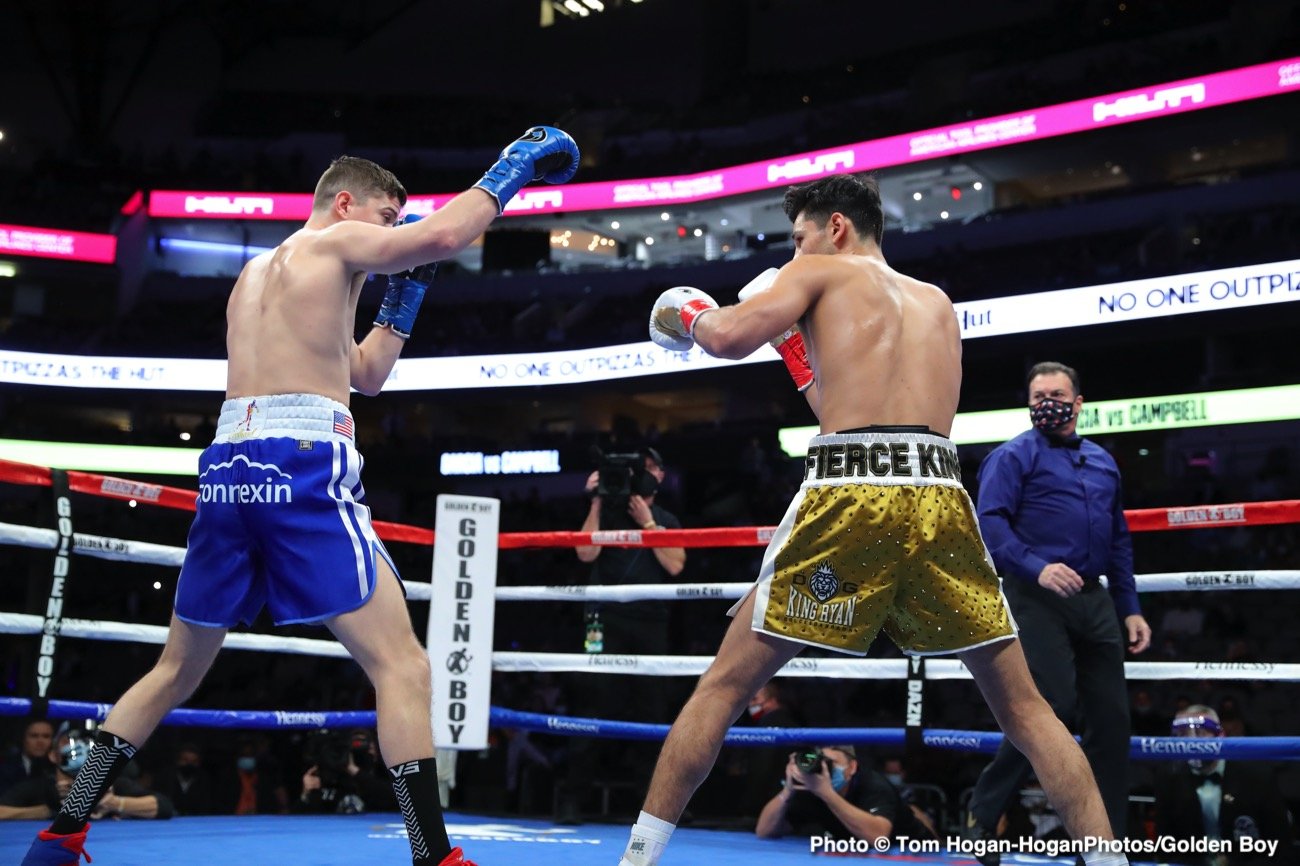 I will be posting takes on the undercard including two exciting fights contested by the Alvarado twins of Nicaragua and more.