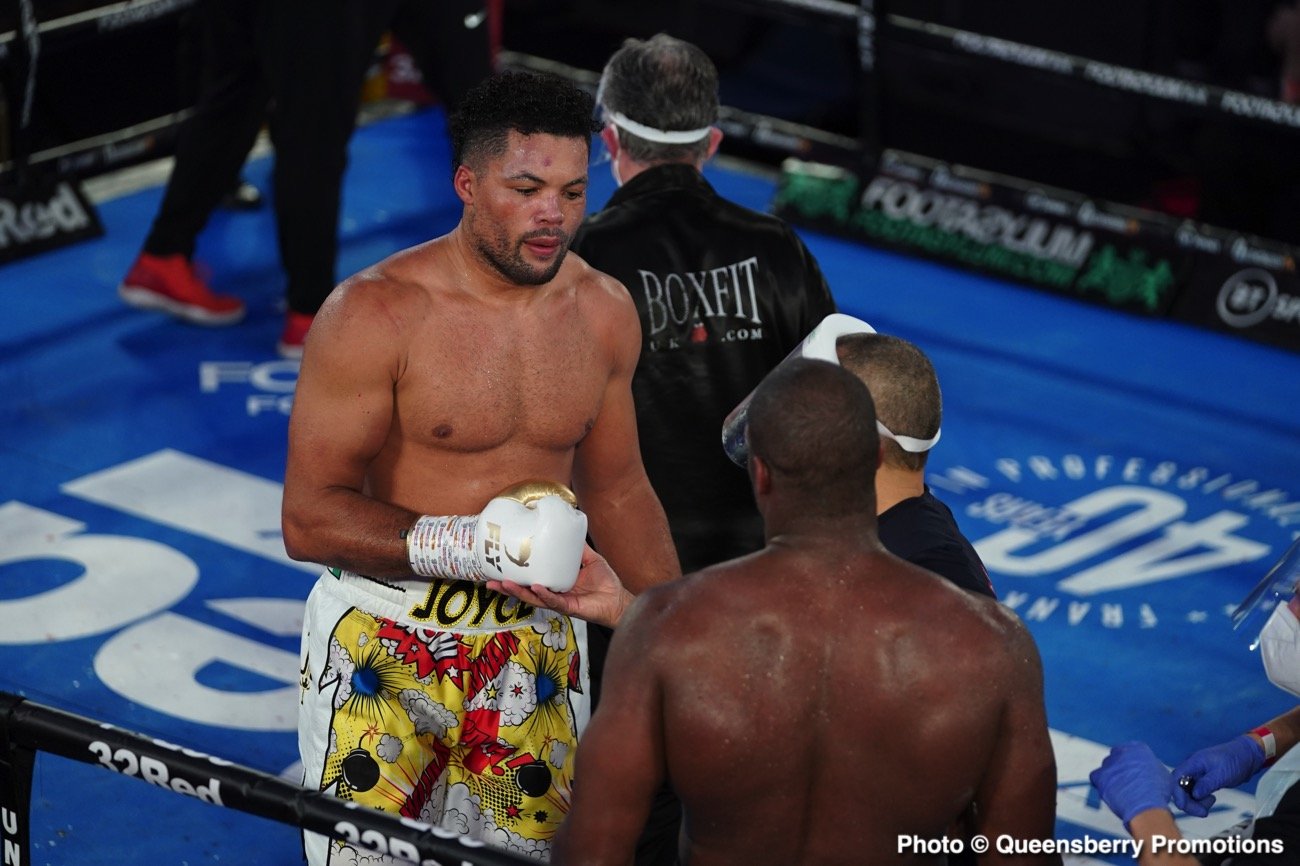 By Pete Strauss: Joe Joyce is motivated about fighting Oleksandr Usyk for the interim WBO heavyweight title. The World Boxing Organization is ordering the fight between the two heavyweights with the winner to potentially challenge the Anthony Joshua vs. Tyson Fury winner in 2022.

Facing Usyk (18-0, 13 KOs) in a rematch allows the unbeaten Joyce (12-0, 10 KOs) to avenge his loss to him in the World Series of Boxing in 2013. Usyk beat Joyce by a five-round unanimous decision in a competitive fight.

At the time, Joyce had only been fighting as an amateur for five years, and he didn’t have the experience needed to beat the 2012 Olympic gold medalist Usyk. Things are different now. Joyce has picked up a lot more experience, size, and power that he’ll be looking to utilize to defeat Usyk.

So if Usyk can get a step aside payment and then face Joyce for the WBO interim belt, it makes sense to take that fight. The winner would then face the Joshua vs. Fury winner.

“One of the carrots for beating Daniel Dubois was to be the face of BT, and I believe I ticked that box,” said Joe Joyce to IFL TV. “I cringe watching it back. It was a good exciting fight,” Joyce said about his match against Usyk eight years ago in 2013.

“We had plenty of exchanges; it was pretty close at the end. In the end, it went five rounds, all-action five rounds as well. So we can do that over 12.

“Well, he’s going to have to deal with me for 12 rounds, not five, and with those Pro gloves and obviously all the skills I’ve learned as well along the way.

“They’re definitely going to pay dividends, and also, I’ll have the best camp and southpaw sparring. So I’ll be ready,” said Joyce on what he’ll beat Usyk.

“I watched that fight Chisora against Usyk. Chisora did well; he gave it his all. It was a close fight, but where Usyk was a little more nimble, on his footwork and on his bike, moving around the ring.

“He was just stealing off him, and I think I’m a bigger specimen. I’m 6’6” and have got faster feet.

“So it’s going to be a lot better fight, and I think I’ve got the tools to do the job. Yeah, I think so,” Joyce said when asked if he stops Usyk in their fight for the interim WBO title.

“Usyk, I’m coming,” said Joyce when asked what message he has for Oleksandr. “This move for Usyk, there’s nothing better for the interim WBO title to get a fight against AJ or Fury,” Joyce said.

We’re going to find out soon if Usyk and Joyce will be fighting or not. Usyk, 33, wants it to be worthwhile for him to fight a dangerous guy like Joyce.

Getting a respectable step aside fee makes sense for Usyk, as he’s owed a title shot as the WBO mandatory. The money that Usyk will get fighting Joyce will pale in comparison to the purse he’d command for a mandated title shot against Joshua.

“I’m looking forward to it [Usyk contest],” said Joyce. “The first fight was a great fight, and the rematch is going to be even better. I’ve picked up more skills along the way, and I don’t lead with my head anymore, taking shots. 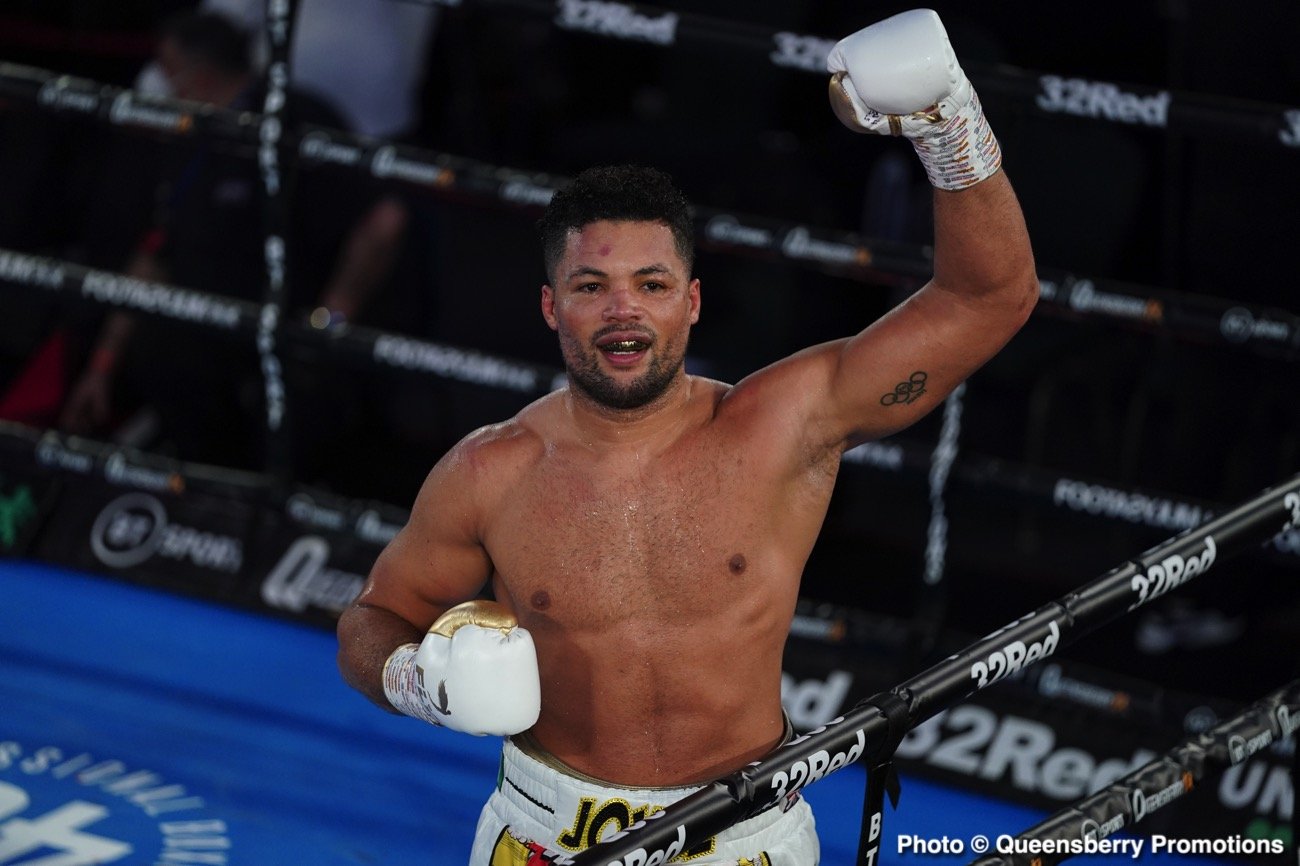 “I can actually move it and do other things now. I’ve been in the sport a lot longer than back then. I think I only did like five years.

“I’ve done ten years now, and I’ve definitely picked up a lot more skills along the way. Usyk seems to be putting a bit more weight on power-wise.

“I think it has the making for a great fight. The winner potentially has a chance to fight the winner of Fury against AJ. That’s the biggest fight in world boxing.

“Two heavyweights going for the undisputed heavyweight championship of the world.

“And whoever wins the fight between me and Usyk has the potential of fighting for the undisputed crown. Mate, there nothing bigger,” said Joyce.

Looking at the 2013 Usyk-Joyce fight video, it’s obvious that Joyce has improved dramatically since then. He has more skills, size, power, and talent.

It’s going to be much harder for Usyk, 6’3″, this time compared to eight years ago because Joyce is so much heavier and stronger.

He weighed only 231 lbs when he fought Usyk the first time, and there wasn’t a big difference between them in terms of weight.

If anything, Joyce may have had a 15 to 20-pound weight advantage. If they fight right now, Joyce will likely enjoy a 40+ lb weight advantage of Usyk, which will be a problem for the Ukrainian fighter.

Joyce looked like he was hesitant to let his hands go at times against Usyk, as he didn’t want to get countered.

‘The Juggernaut’ confident of getting title shot

“It’s a great fight, I’d be interested in watching it,” Joyce said about a fight between Deontay Wilder and Charles Martin.

“I’ve shared time in the ring when I was in Big Bear [California] with Abel [Sanchez]. I did a lot of rounds in the ring with Charles Martin.

“I thought when he boxed Joshua, I don’t think he was in the right place. There was a lot going on behind the scenes, and he wasn’t really ready for that fight.

“I think sharing the ring with him, we had some hard spars over at Big Bear. It would be interesting to see. Knowing Wilder, he’s got that right hand.

“If he [Martin] walks into a right hand like he did against Joshua, then it could be an early night. I think he’s improved since then.

“I think with his mindset and dedication, he’s come up. He’s in a better place now. It will definitely be an interesting fight, and definitely one I’ll be tuning in for.

“For the interim title, of course, she will,” said Joyce when asked how his mom feels about him potentially facing Usyk for the WBO interim heavyweight title.

“I seem to be edging to a world title. I’ll get there. I’m just still kind of under the radar,” said Joyce.

Joe will fight for the interim WBO title if the World Boxing Organization orders the match between him and Usyk. It’s looking like the WBO will order the Usyk vs. Joyce.

The fight could wind up being for the full WBO title if Joshua and his promoter Eddie Hearn fail to give Usyk the step aside money he’s asking for. Joshua wants the WBO title to be on the line for his fight against Fury, but it’s going to cost him for that to happen.

Bryan vs Charr, Shumenov vs Murphy LIVE on DonKing.com on Jan. 29 »