By Sean Jones: Eddie Hearn doubts that Golden Boy and Mayweather Promotions will be able to make the fight between Ryan ‘Kingry’ Garcia and Gervonta ‘Tank’ Davis due to the network issues that will prevent it from happening.

King Ryan (21-0, 18 KOs) fights on DAZN, whereas Tank Davis (24-0, 23 KOs) is with Fox and Showtime, neither of which is going to give the green light to their fighters compete on another network platform, says Hearn.

DAZN is a subscription-based network that doesn’t do pay-per-view fights as of yet. For that reason, it won’t be in their best interest to let Ryan Garcia take on Tank in a fight that will split the audience.

It’s not a good thing for Showtime or Fox to allow Tank Davis to fight Ryan on DAZN, as a lot of boxing fans will likely sign up for $10 per month to watch the fight on that platform.

Hearn isn’t sure what the game is for Ryan and Tank to be talking about a fight between them that won’t happen.

The Matchroom boss says Ryan should be focusing on a fight that can get made between him and WBC lightweight champion Devin Haney, who also fights on DAZN. As for Tank, Hearn says he should be trying to fight Teofimo Lopez.

“When you look at Ryan Garcia vs. Gervonta Davis, one is with DAZN, and one is with Fox or Showtime,” said Eddie Hearn to Boxing Social. “Gervonta isn’t going to fight on DAZN.

“Ryan Garcia contractually through Golden Boy can’t box on Fox. So is that just to get people talking or is there something going on?

“From DAZN’s point of view, does DAZN want to make Devin Haney against Ryan Garcia in April?

“That’s the fight. But Devin, I spoke to him the other day and I said, ‘April, Ryan Garcia, that’s what we’re hoping for.’ ‘No, no chance, no chance.’ I mean, obviously, they’ve got history from the amateurs.

“I saw ESPN put something out about the ‘Four Kings,’ and liking them to [Roberto] Duran and [Sugar Ray] Leonard, which was a little bit adventurous.

“But they could be, but let’s look at that era. Sugar Ray Leonard, Marvin Hagler, Tommy Hearns, Roberto Duran, they all boxed each other, and numerous times.

“That’s what we have to do. So, Teofimo [Lopez], Tank, Devin, and Ryan Garcia, let’s start making the fights. They can have trilogies, it doesn’t matter, but they’re all so young and they’re willing to take the risks and the challenges.

“So we’ve got to try and make that, and I hope that Ryan and Golden Boy will say, ‘Okay, the Gervonta Davis fight can’t work at the moment, so we’ll fight Devin.’ But if they can’t make [Davis vs. Garcia].

“No one can moan if they make Ryan Garcia vs. Gervonta Davis, but if they don’t, they really should be fighting Devin Haney. And we’ll have to see what happens,” Hearn said

With the money that can be made in a fight between Tank and Ryan, it’s likely that the networks, DAZN and Showtime, will come together to allow this fight.

Obviously, it’s better for Hearn to throw cold water on the Davis vs. Garcia fight, because he badly wants Ryan to fight Haney next. Haney needs the Garcia fight.

“Well done for him and well done for Golden Boy, and we’ll see where he goes for the future,” said Hearn to Boxing Social about Ryan Garcia following his win over Campbell.

“Hopefully, Devin Haney, which he doesn’t seem to want to talk about. It is going to be mandated by the WBC. That [Ryan vs. Campbell] was a final eliminator for Devin Haney, whatever anyone says. We’ll see if we can make that fight for April.

“I know from our side [Matchroom Boxing], from the WBC side and DAZN side would like to see happen, which is that fight [Ryan Garcia vs. Devin Haney] is ordered and that fight is made.

“Like I said, in the second round, they were probably thinking, ‘Oh my life, what’s going on here?’ But they also know that Ryan Garcia isn’t ready for Tank,” said Hearn about Golden Boy.

It’s likely that the Golden Boy brass realizes that Ryan Garcia isn’t ready for Tank, but the money is going to be out of this world. Additionally, the publicity and fame that Ryan receives from this fight will be priceless.

Golden Boy will likely stack the Ryan vs. Tank undercard with some of their best prospects, and they’ll pick up a lot of new fans.

“There were a lot of unanswered questions about Devin Haney,” Hearn said. “I believe Devin Haney is the best 135-pounder in the world, but he has to prove it. 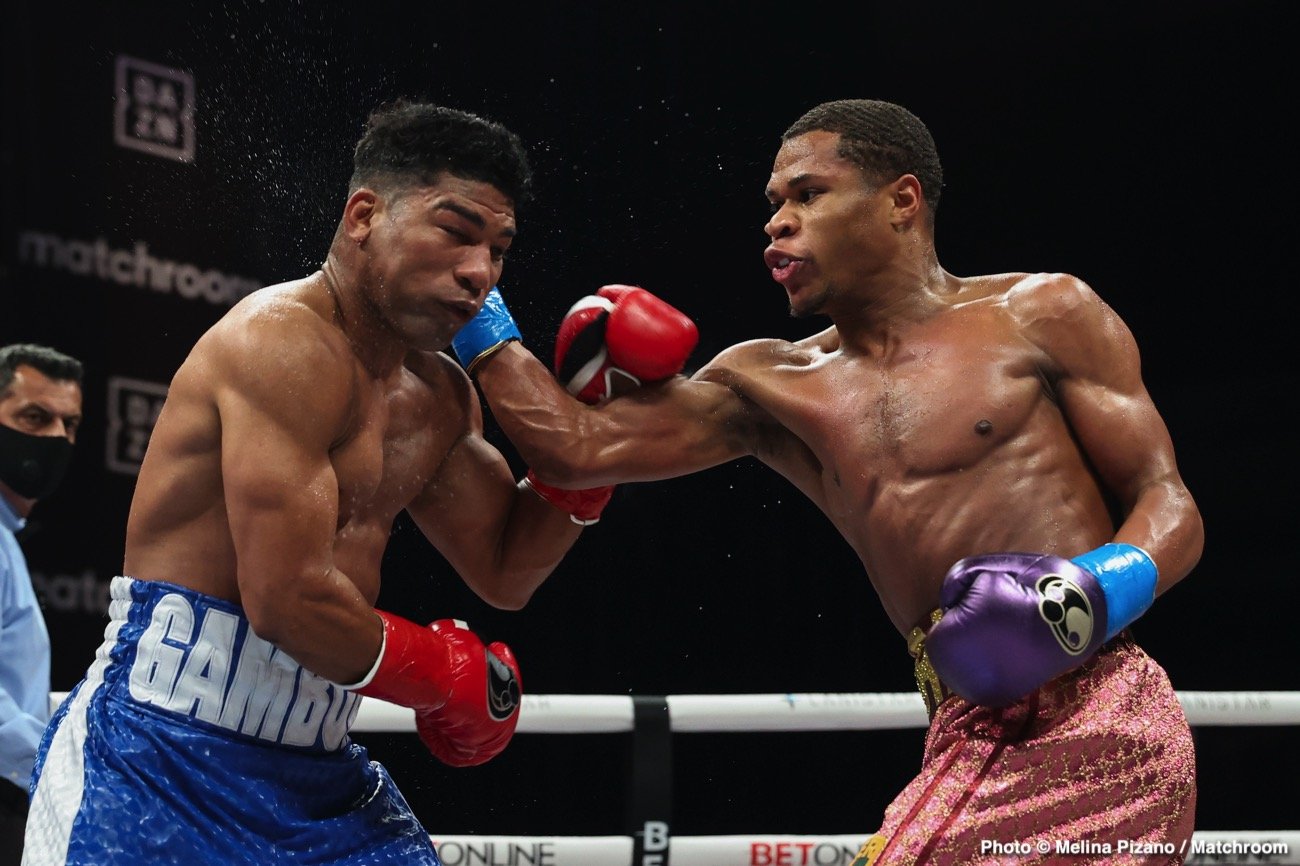 “And this is the frustrating thing to Devin because he wants [the big fights]. Don’t forget that he went down the WBC to fight [Vasily] Lomachenko to become his mandatory, and now we need that breakout fight.

“I don’t feel that breakout fight is Javier Fortuna, who is a good fighter, but we need that breakout high profile fight. We were s happy when that Ryan Garcia vs. Luke Campbell fight got made because Devin Haney was fighting the winner.

It doesn’t matter how much Hearn bangs the drum for a fight between Haney and Ryan Garcia. It’s not going to happen, as Ryan doesn’t want that match yet. Even if he weren’t fighting Tank next, he still likely wouldn’t face Haney.

Ryan says he wants to face Haney for last because he knows him well, and he feels there are bigger matches out there against Teofimo Lopez and Tank.

You have to wonder how well Ryan did in his matches against Haney in the amateurs. It must have been incredibly difficult for King Ryan to be dragging his feet about facing him.

Poor Haney, he’s not likely to get any of the big names at 135 to fight him next, and he’ll be stuck defending against Javier Fortuna. Unless Haney is forced to take the fight with Fortuna, he’d be better off facing Luke Campbell.

That match-up would do a lot more for his career than a contest against the 32-year-old former WBA super featherweight champion Fortuna.

Teofimo MUST fight Haney to become the undisputed champ

“There is not one fight between those four that is not mouth-watering. So I was winding up Teofimo in Texas, saying, ‘You’re not undisputed.‘

“I know Teofimo just bought a T-shirt range out, ‘Undisputed.’ I think he should call those back in and change the logo,” Hearn said about Teofimo calling himself the “undisputed” 135-pound champion. I did say to him, and this is my honest opinion, he should be undisputed.

“We shouldn’t be in this position that we’re in, but he [Teofimo] is NOT undisputed because the other governing bodies do not recognize the Franchise champion is someone that can unify.

“So the only way he can become undisputed by fact and on paper is to fight Devin Haney. He deserves to be undisputed. He beat the #1 lightweight, who used to be undisputed in Vasily Lomachenko,” said Hearn about Teofimo.

The way that Teofimo is talking about being the “A-side” for a fight with Devin, he’s going to be an obstruction to making that happen. Moreover, Top Rank promoter Bob Arum has never shown interest in matching Teofimo against Haney.

It’s unlikely he’ll change his view on that right now because Haney brings nothing to the table in terms of fans.

Arum dealing with a nightmare with Teofimo

“So I think Teofimo Lopez against Haney is a wonderful fight. Listen, he [Teofimo] asked me for $10 million for that fight,” continued Hearn. 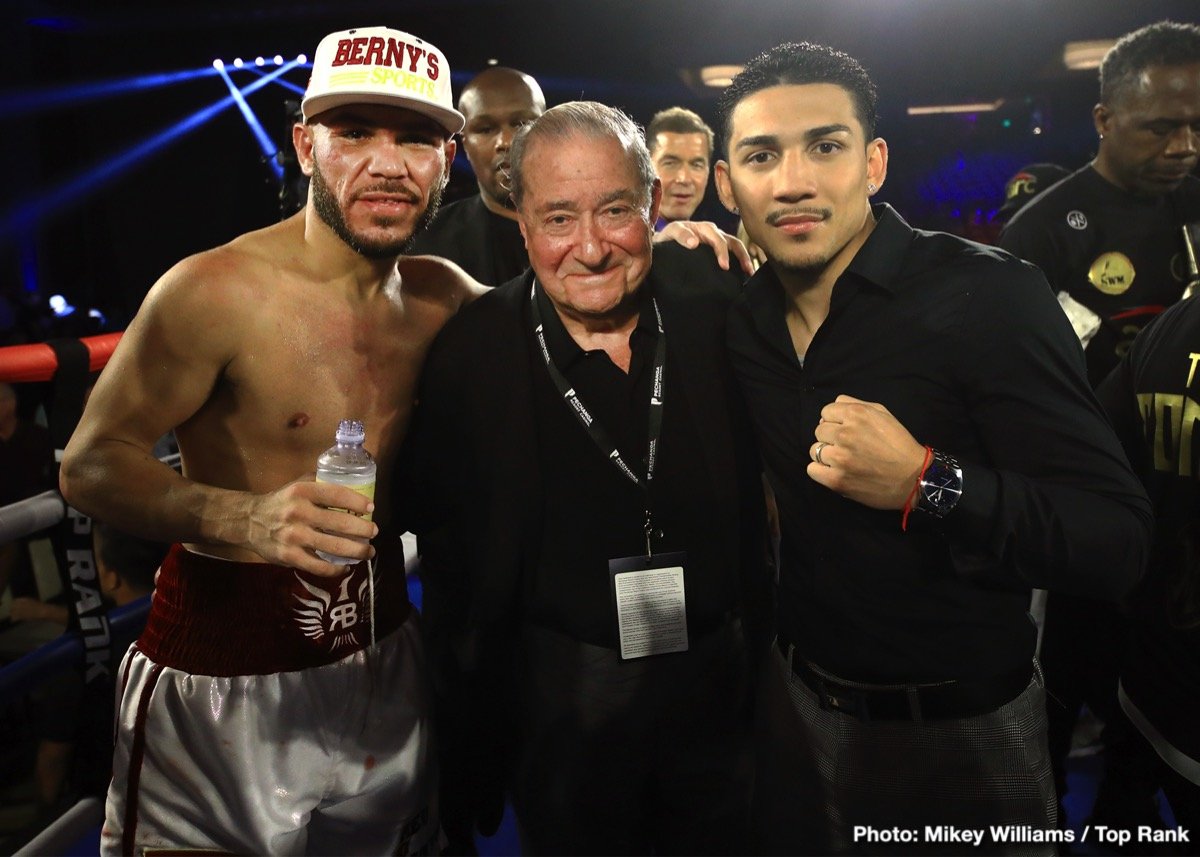 “You can’t get there, but I’m sure we can make him a nice offer. Teofimo is a nightmare at the moment for Bob Arum, and Bob isn’t mincing his words at the moment.

“So right now, I’ll leave that to Bob and Top Rank to put those numbers together because in this world right now, it ain’t going to happen.

“But I’d rather focus on what can happen, and that’s Haney against Garcia. Let’s start this ball rolling for these wonderful four young fighters,” said Hearn.

If Teofimo wants the kind of money that Hearn is talking about for his fights on ESPN, Arum could have huge problems with him unless he takes him to pay-per-view.

The only way Teofimo is going to become a PPV star is if Arum matches him against fighters that the U.S boxing fans have heard of. Matching Teofimo against his IBF mandatory George Kambosos won’t do anything as far as increasing his popularity with U.S boxing fans.

I mean, the fight might make money from ticket sales in Australia, as that’s where the match is expected to take place. But the downside of Teofimo fighting a no-name like Kambosos is the match won’t interest the casual boxing fans in the U.S.