Angelo Leo vs. Stephen Fulton Jr on Jan.23 on Showtime 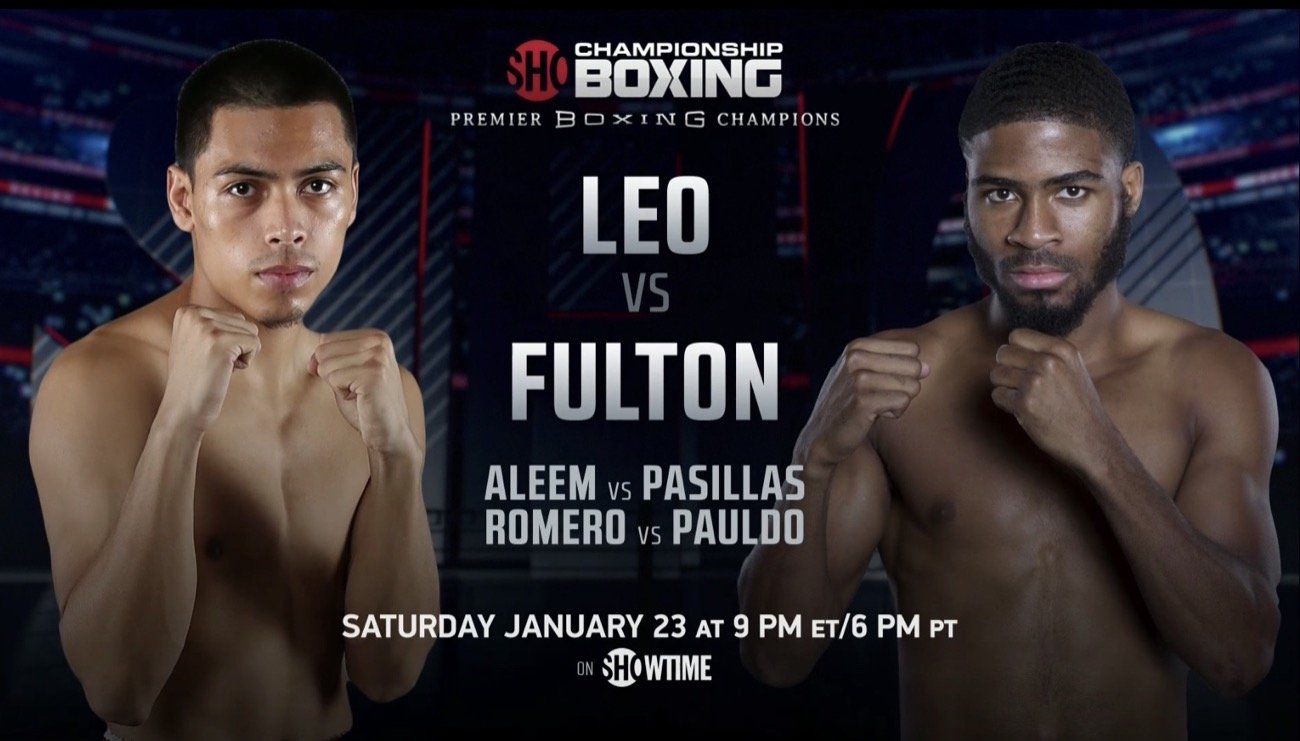 The co-main event pits two more undefeated 122-pound boxers against each other as Ra’eese Aleem and Victor Pasillas face off in a 12-round bout for the interim WBA title. The telecast opener features rising prospect Rolando Romero against Justin Pauldo in a 12-round lightweight bout for Romero’s interim WBA title. The six fighters’ combined ring record on the card is a remarkable 96 wins with just one loss.

“We’re rolling straight into 2021, ready to keep creating as many opportunities as we can for our fighters,” said Leonard Ellerbe, CEO of Mayweather Promotions. “Angelo Leo and Rolando Romero will both be defending their titles for the first time and will be put to yet another test in their respective bouts. Everyone has been working hard and fine-tuning in preparation for January 23, and it’s going to be another great night of boxing filled with inspiring talent to kick off the new year.”

“Leo vs. Fulton is a true 50-50 matchup between two rising stars entering the primes of their careers,” said Tom Brown, President of TGB Promotions. “Fulton’s chance at capturing the title was delayed, but his opportunity finally comes January 23 on SHOWTIME. Leo worked incredibly hard to capture the world championship in August and will come prepared and determined to defend it successfully.

“The super bantamweight division will have a clear world title contender emerge from the co-main event, a battle of unbeatens between Aleem and Pasillas. Add in the opening bout of ‘Rolly’ Romero vs. Justin Pauldo, a fight that can launch a prospect into a contender, and we have an excellent fight card to kick off the year.”

Leo (20-0, 9 KOs), who fights out of the Mayweather Promotions stable, became the first world champion from his hometown of Albuquerque, N.M., since legendary three-division champion Johnny Tapia when he defeated Tramaine Williams by unanimous decision in August. The 26-year-old was originally scheduled to face Fulton for the vacant WBO junior featherweight world title that evening in the first SHOWTIME boxing event following the sport’s pandemic shutdown. Still, Fulton was forced to withdraw following a positive COVID-19 test.

“It’s been a crazy year for everyone, but to say I walked out of 2020 a world champion is truly incredible and humbling,” said Leo. “I spent 16 years training for that moment to become a champion, and here I am, preparing for my next camp for my first defense top of 2021. That’s a blessing, and I thank Mayweather Promotions and my team for that. My experiences with Floyd’s last camp would really put me in a great position going into this fight.

“And my father Miguel has been instrumental in keeping me grounded and reminding me that all of these fighters are eyeing my spot. My goal in 2021 is to remain champion and get more belts, and Fulton is that next test.”

Born and raised in West Philadelphia, Pa., Fulton (18-0, 8 KOs) has faced impressive competition in his young career while rising to the 122-pound ranks, where he is currently rated No. 1 by the WBO. In his last 12 professional fights, the 26-year-old has beaten seven unbeaten fighters, including Josh Greer, Adam Lopez, and Luis Saul Rosario. Fulton’s two most recent wins are a knockout over Isaac Avelar in August 2019 before most recently scoring a dominant 12-round unanimous decision victory over Arnold Khegai in January.

“Training is going great,” said Fulton. “I feel like everything happens for a reason because I’m 10 times more ready now than I was the first time around. I’m excited to fight for the title, and I expect nothing but Angelo Leo to be himself and fight his fight on January 23.”

Ranked in the top-10 by the WBA and IBF at 122 pounds, Aleem (17-0, 11 KOs) can take a big step closer to a world title shot when he faces fellow unbeaten Pasillas for the interim WBA strap on January 23. Raised in Michigan and training out of Las Vegas, Nev., Aleem, 30, has stopped his past six opponents inside the distance as he continues to step up his competition.

“This is a high-stakes fight, and the winner will get a guaranteed world title fight,” said Aleem. “It’s going to be a good fight, but I am at the top of the heap. I knew I belonged at the top a long time ago, and after my last fight, that was proven. Winning this fight makes me the number-one contender, and the only thing left after this is to win the world title.”

Pasillas (15-0, 8 KOs), who hails from East Los Angeles, is fresh off a dominating sixth-round knockout over then-unbeaten Ranfis Javier Encarnacion September 2020, which launched him into the WBA’s top-10 rankings. Like Aleem, the 28-year-old Pasillas also carries significant power. He has stopped his four most recent foes, including a first-round knockout of Ernesto Guerrero.

“I’ve envisioned being in this position since I first stepped into a boxing gym at age eight, and now it’s time to seize the moment,” said Pasillas. “I’m going to take full advantage of this opportunity and show the world, and everyone watching on SHOWTIME, that I belong on the big stage with the elite fighters at super bantamweight. Aleem is a good fighter, but he won’t be able to hang with me. I’m going to punish him until I knock him out. East L.A. in the house, let’s go!”

Born and raised in Las Vegas, Nev., Romero (12-0, 10 KOs) returns to SHOWTIME following his controversial unanimous decision victory over Jackson Marinez in August. The 25-year-old captured the interim WBA lightweight title with that win and went the distance for just the second time in his professional career. Fighting under the Mayweather Promotions banner, Romero has been matched tough early in his career with just two losses among his four most recent opponents, including the once-defeated Pauldo.

“I’m going to approach this fight like I do any other fight; I don’t feel the need to sell myself,” said Romero. “I’m thankful for my fans who have been with me since day one. I fight for them because a fan of Rolly is to be an underdog, to be doubted, and that’s all I have ever been. Whether you’re with me on January 23 or against me, I know you will be watching.”

Following an impressive unanimous decision victory over a tough Josec Ruiz in August 2020, Pauldo (14-1, 7 KOs) returns against his career’s stiffest test when he faces the blue-chip prospect, Romero. Hailing from Orlando, Fla., and training in Houston, Texas, Pauldo, 26, owns a four-inch reach advantage over Romero, who is the third unbeaten foe of his career.

“I’m thankful for this opportunity, and I’m excited for all of my years of hard work to pay off on January 23,” said Pauldo. “I was already training and in shape when I got the call for this fight, so I’m going to be 100% on fight night. Romero is a one-gear type of fighter who comes straight forward. I believe that I have better skills and am a better all-around fighter. This is definitely going to be an interesting fight with contrasting styles, and I can’t wait to show off my skills and bring this title home.”