Sebastian Fundora To Take On Habib Ahmed In Title Eliminator 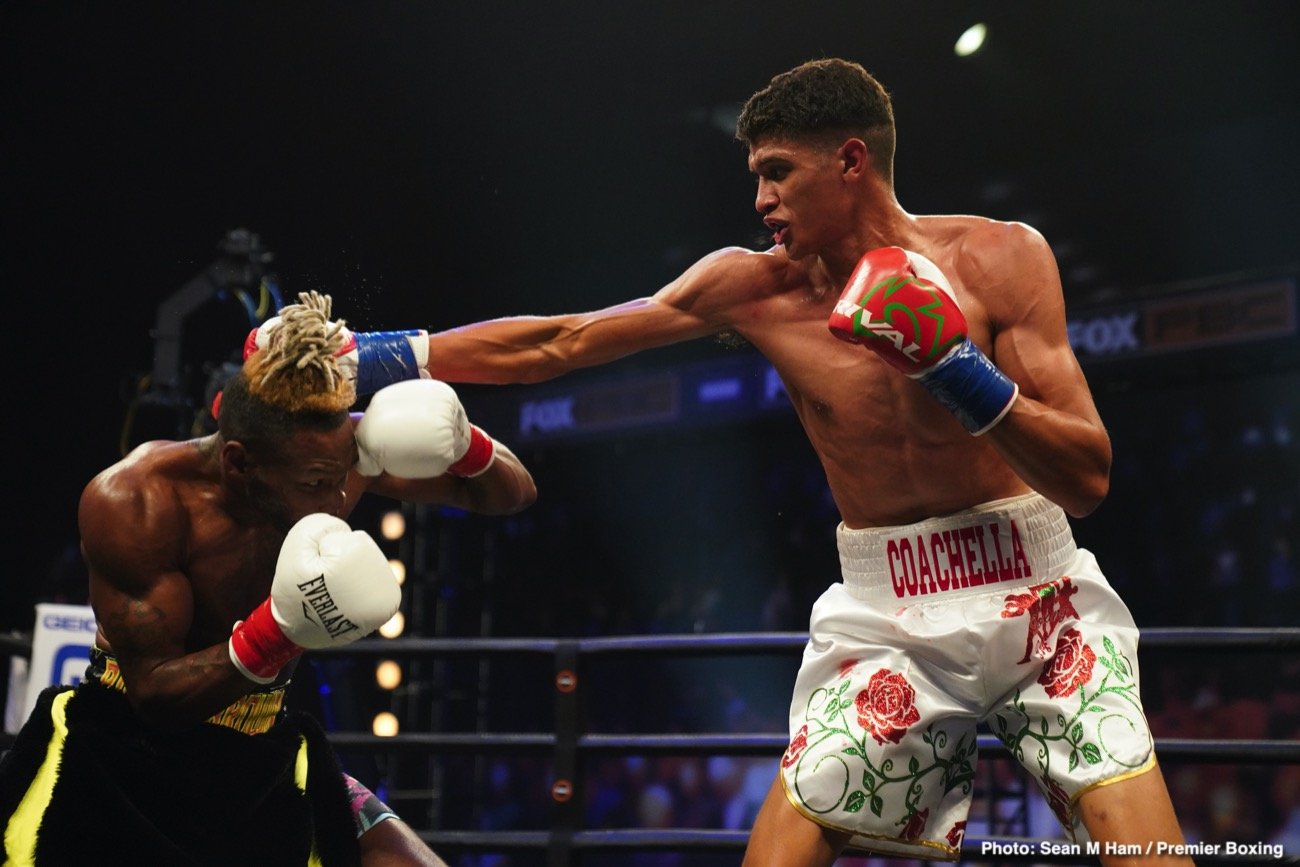 The pay-per-view begins at 9 p.m. ET/6 p.m. PT and features all-action contenders Josesito “The Riverside Rocky” Lopez and Francisco “Chia” Santana squaring-off in a 10-round welterweight affair while featherweight contender Miguel Flores will meet Mexico’s Eduardo Ramirez in a Featherweight Title Eliminator to open the pay-per-view.

Ahmed replaces Jorge Cota and Flores replaces Julio Ceja, after Cota and Ceja tested positive for COVID-19. Flores had already been preparing to face Isaac Avelar on December 5 and Ahmed had been in training as a potential replacement on this card.

Buy the pay-per-view now on www.foxsports.com/ppv and watch on any screen.

Tickets for the live event, which is promoted by TGB Promotions, Man Down Promotions and DSG Promotions, are on sale now, and can be purchased at SeatGeek.com, the Official Ticketing Provider of AT&T Stadium.

Towering at nearly six-feet six-inches, Fundora (15-0-1, 10 KOs) has used his height and length, combined with power and aggressiveness, to rack up an unbeaten record since turning pro in 2016. The 22-year-old owns two victories in 2020, beating then unbeaten Daniel Lewis by decision in February, before most recently becoming the first fighter to knock out Nathaniel Gallimore with his August triumph on FOX. Fighting out of Coachella, California, Fundora entered the ring three times in 2019, including TKO victories over then unbeaten fighters Donnie Marshall and Hector Manuel Zepeda, plus an exciting split-draw against fellow contender Jamontay Clark.

A native of Accra, Ghana, Ahmed (27-1-1, 18 KOs) steps into the ring after his August fight with Alantez Fox ended with a no-contest after three rounds. Prior to that, Ahmed scored a dominant unanimous decision over Juan De Angel in May 2019. The 29-year-old has won back-to-back fights since dropping a 2018 world title contest against Gilbert Ramirez. Ahmed was unbeaten in his first 26 pro fights since his 2011 debut, leading up to the Ramirez fight.

Lopez (37-8, 20 KOs) has long established himself as a fiery competitor and top contender in multiple weight classes and has compiled an impressive resume. He owns victories over Victor Ortiz, Miguel Cruz and Mike Dallas Jr., having given the last two the first defeat of their careers. Additionally, he has squared off against Canelo Alvarez, Andre Berto, Marcos Maidana and Jessie Vargas. In 2019 the Riverside, California native lost a majority decision to Keith Thurman, before most recently knocking out John Molina Jr. last September.

Santana (25-8-1, 12 KOs) has taken on the toughest challenges at 147 and 154 pounds and has made his name with his action style throughout a long career as a contender. Santana returns to the ring after losing to former unified champion Jarrett Hurd in January. The Santa Barbara, California native owns a victory over Olympic gold medalist Felix Diaz in April 2018 and has faced unified champion Jermell Charlo and former champion Sadam Ali, while also fighting to a six-round draw against former unified champion Julian Williams in 2011.

The 28-year-old Flores (24-3, 12 KOs) will return to action for the first time since dropping a decision to four-division champion Leo Santa Cruz in their 130-pound title fight last November. Born in Michoacan de Ocampo, Mexico and fighting out of Houston, Texas, Flores scored stoppage wins over Luis May and Raul Chirino heading into that title fight. A pro since 2009, Flores won his first 22 pro fights.

Fighting out of Sinaloa, Mexico, Ramirez (23-2-3, 10 KOs) has risen up the featherweight rankings with wins in three of his last four fights since losing to then 126-pound champion Lee Selby in 2017. The 27-year-old Ramirez most recently gave Leduan Barthelemy his first career loss via a fourth-round stoppage in their rematch last November, following up on their split-draw the first time they faced off. Overall, Ramirez has won 14 of his last 17 outings.

The 23-year-old Avelar (16-2, 10 KOs) lost a narrow split decision to Miguel Tique in December after being stopped by unbeaten top super bantamweight Stephen Fulton in August 2019. The Auguascalientes, Mexico native was unbeaten in his first 16 pro fights, including a 2019 triumph over Juan Antonio Lopez in his U.S. debut. He will be opposed by the undefeated Lucas (23-0, 16 KOs), who will make his U.S. debut on December 5 after victories in 2019 over Raston Kayira and Ndodana Ncube.

A Roseland, New Jersey native Mielnicki (6-0, 4 KOs) steps into the ring under the guidance of renowned coach Joe Goossen for the first time on December 5 as he looks to continue to show the skillset of a future champion. The 18-year-old Mielnicki has scored three victories in 2020, including most recently stopping Chris Rollins in August. He will take on the 30-year-old Pulluaim (5-2, 1 KO) who defeated Emeka Ifekandu in his last fight in October 2019. The Riverside, Missouri native Pulluaim has fought professionally since 2018.

The 24-year-old Brooks (6-0, 5 KOs) trains alongside Errol Spence Jr. and under the guidance of top trainer Derrick James. A Dallas native, Brooks made his 2020 debut in February, scoring a first round stoppage of Melvin Russell. He will face Anaheim, California’s Delgado (6-1, 5 KOs), a 29-year-old who has fought professionally since 2016 and who most recently stopped Joseph Ward in October 2019.

“This training camp has just been us doing more of the same things that we always do,” said Fundora. “We’ve been getting our work safely. Nothing is stopping us. We’re doing all of our normal sparrings. This is my second fight since the pandemic, and I think that’s going to help everything go smoothly for me.”

A pro since 2016, Fundora has always fought with great regularity, competing seven times in 2017 and three times per year in subsequently. Even in 2020, Fundora will be stepping into the ring for the third time, after beating Daniel Lewis in February and, most recently, Nathaniel Gallimore in August.

“I’m very confident I’m not going to have any ring rust heading into this fight,” said Fundora. “It’s important to me to keep that rust away so that I can be totally comfortable inside the ring. I don’t really take any time off at all. I treat this just like a regular job. I have to work like everybody else.” 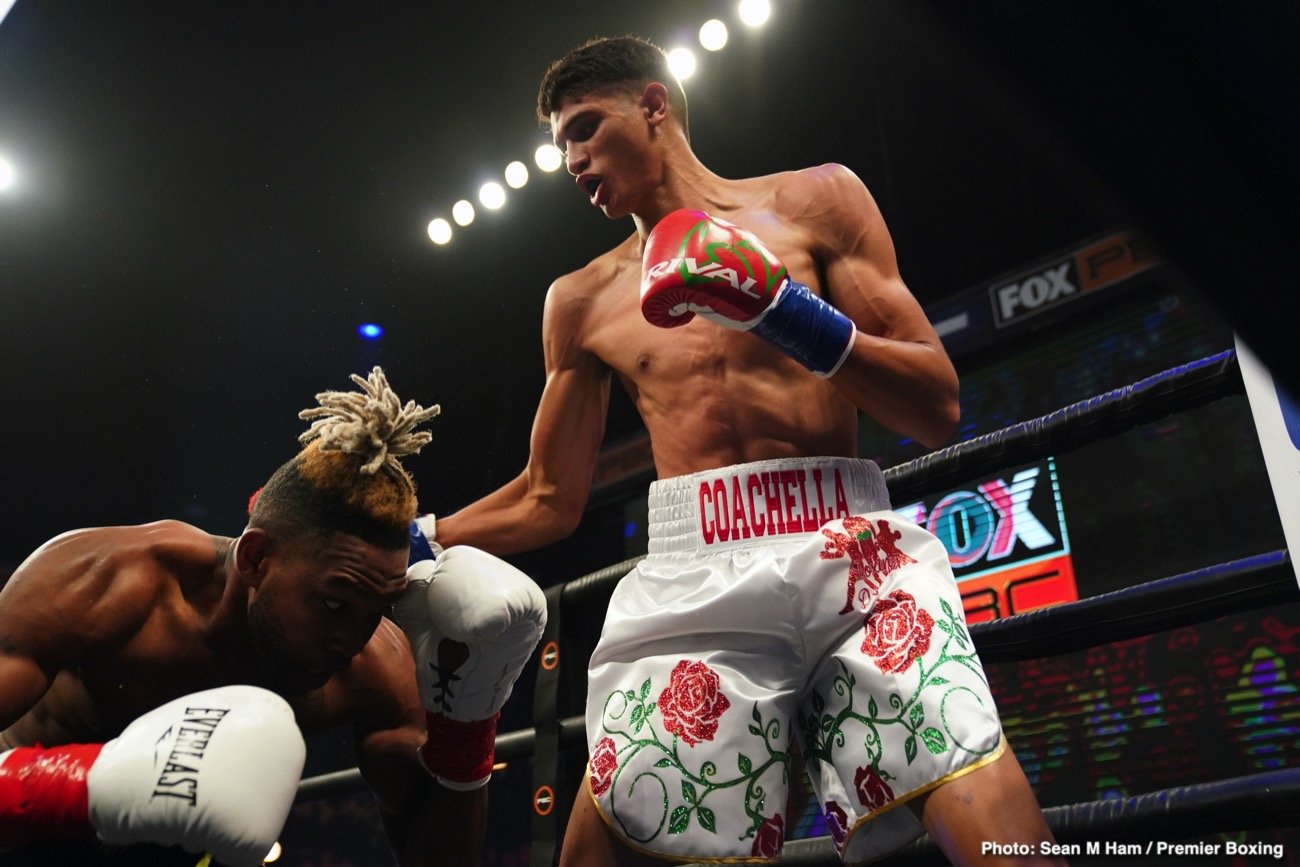 On Saturday, Fundora will face an experienced opponent in Cota, who also shares his Mexican heritage. Cota has faced top super welterweights Jermell Charlo and Jeison Rosario and was impressive in his last bout in January as he stopped Thomas LaManna.

“Cota is a Mexican warrior, so I expect him to come to fight and not be afraid to exchange,” said Fundora. “Luckily for the fans, we’re not afraid to exchange either. We’ll be ready for his aggression. I hope he brings his A-game because I will bring mine and give the fans a great performance. The fact that we’ll have such a huge audience of Mexican and Mexican-American fans make it almost feel like I’m fighting at home.”

With this fight being a WBC title eliminator, Fundora could put himself into position to face unified WBC, IBF, and WBA 154-pound champion Jermell Charlo or top WBC contender Erickson Lubin in future fights. Fundora knows that a statement victory will help his cause, even though his focus remains squarely on Cota.

“This is my chance to say that I’m here and I’m coming for it all,” said Fundora. “Right now, I’m just focused on Cota and my fight on Saturday. I believe I’m right there with the top contenders and champions and that I’m ready for any of them after I handle my business this weekend.”