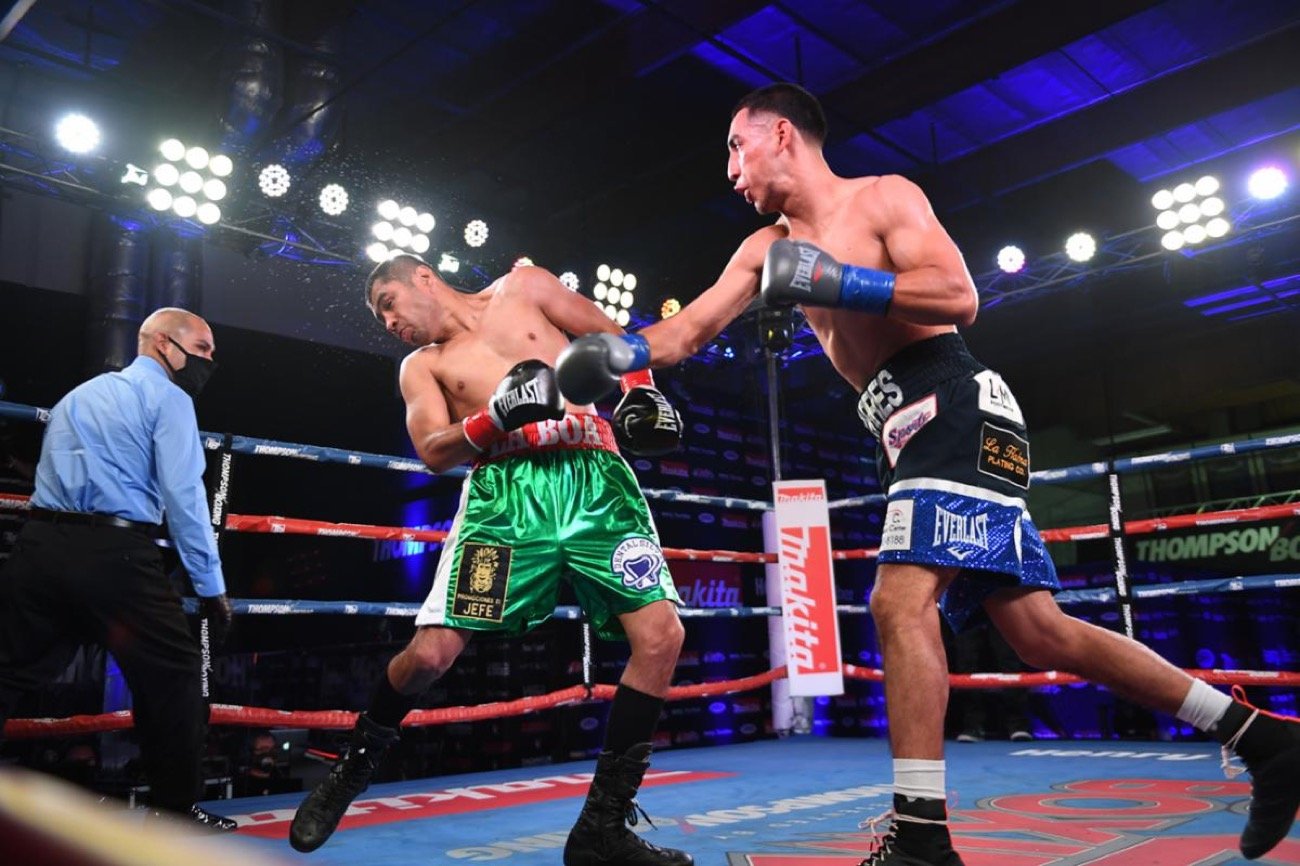 Torres showed his superiority against Rodriguez, who was tough as nails, by displaying a high ring IQ, to go along with his crisp and accurate punching. In the early rounds, Torres was going to the body as he tried to slow down the aggressive style that Rodriguez was exhibiting. Rodriguez kept coming but was not effective in his attack as Torres had an answer for everything he was trying to do. Torres landed a few big shots in the middle rounds that hurt Hernandez, but he kept coming, showing why he is considered on of the toughest fighters in the division. Torres outworked Hernandez for the rest of the fight and scored a unanimous decision. Scorecards read 79-73, 80-72 in favor of Torres.

“I have to give Rodriguez a lot of credit for hanging in there, he’s definitely a very tough fighter,” said Torres. “I know I hurt him a couple of times, but he hung in there. I’m ready to step up in competition and fight anyone who has a regional title. I know I have what it takes to become a world champion one day, so I’m going to keep working hard in the gym till I get my shot.”

In the 8-round co-feature, super flyweight prospects, Saul Sanchez (15-1, 8 KO) and Mario Hernandez (10-2-1, 3 KOs), delivered a candidate for “Fight of the Year”. Both fighters slugged it out for the entire fight. In the early rounds, Sanchez held his ground and sat in the pocket, getting the best of some powerful exchanges, as Hernandez was coming forward with a lot of pressure. Hernandez was relentless with this attack and had Sanchez on the ropes as the fight headed into the later round but was getting hit with flush punches. When the final bell rang, it was Sanchez who had did the most damage in a fight that was an all-out war. Score cards read 78-74, 79-73 in favor of Sanchez.

“I was expecting to go to war with Hernandez because I know what type of warrior he is,” said Sanchez. “When the first bell rang, we just started slugging it out. He came right at me and I held my position and started to let my hands fly in a calculated effort. I felt I landed the cleaner shots and it showed on the judge’s scorecards. I’m looking forward to my next fight and I’m very happy with my performance tonight.”

The opening 6-round middleweight bout showcased two fighters who were putting their unbeaten records on the line as Richard Brewart Jr. took on Louis Hernandez, in a fight that ended up being an explosive war. In the first round, both fighters were feeling each other out as Hernandez was circling both ways, while Brewart Jr. was standing his ground in the middle of the ring. Then suddenly, the fight broke out into a slugfest and Brewart Jr. was on the wrong end of an explosive exchange and hit the canvas after a barrage of powerful punches from Hernandez. Brewart Jr. survived the round and got his legs back. In the ensuing second round, both fighters continued to let their hands fly but this time it was Brewart Jr. who landed a catastrophic right hand that send Hernandez to the deck and he never recovered, forcing the referee to stop the bout at the 1:48 mark of round two. Brewart Jr. improved to (8-0, 4 KOs), while Hernandez drops to (8-1-1, 6 KOs).
﻿
“I knew I had to dig deep after getting dropped in the first round,” said Brewart Jr. “I got hit with a body shot that had me hurt, hence me not being able to protect myself when he was coming at me with that barrage of punches. After I got myself together, I knew I had to go for it in the next round and that’s what I did. I landed a powerful right hand and took him out. I’m going to take this momentum into 2021 and continue my march toward a world ranking.

ATLANTA (Dec. 22, 2020) — Boxing legacy Evan “Yung Holy” Holyfield scored a first-round TKO in his fifth outing as a professional on Dec. 12 in Atlanta, dispatching Donnis Reed to remain unbeaten as a super welterweight. Holyfield, 23, unleashed a non-stop offensive barrage before the contest was called at the 1:53 mark as the fighter’s father, former four-time heavyweight world champion Evander Holyfield, watched ringside.

“My strategy was to be aggressive,” said Holyfield (5-0, 4 KOs) of his quick work versus the 35-year-old Reed. “Once I connected on a couple punches early, I wanted to keep landing the jab and finish the job.”

The evening also featured an interactive demonstration of the Reflexion sports cognition technology service for fighters and trainers. Evan Holyfield has incorporated the neuro-fitness training system, designed to “rewire the brain” to perform faster and smarter in competition, into his workout regimen. He is the first professional fighter to utilize cognitive acceleration technology as Reflexion looks to expand its involvement in boxing, martial arts and MMA.

“Evan showed the type of reaction time and decision making in the ring that our technology is designed to strengthen,” said Reflexion CEO and Founder Matt Campagna, who attended the fight. “Boxing is one of the best examples of a speed-element sport where athletes can gain a competitive edge with cognitive training, and we’re obviously excited about Evan’s potential using the Reflexion system.”

Holyfield is currently training with Olympic gold medalist and two-time world welterweight champion Mark Breland together with Bert Wells at Sugar Bert Boxing in Atlanta. Breland was on the U.S. Olympic boxing team with Evander Holyfield in 1984.

“I’m in a great place with my training right now,” Holyfield said. “I couldn’t ask for a better team to have in my corner and the Reflexion technology takes it to another level.”

Sanctioned by the Georgia Entertainment and Athletic Commission and co-produced by Main Events and Bigg Time Productions, the event was live-streamed to a pay-per-view audience on the BPE Network. Sports Garten Network covered the Holyfield fight, including weigh-in, the Round 1 TKO and post-fight interviews, all available on the SGN YouTube Channel. Results for the full card are listed at Boxrec.com.

Charles Conwell and Stephan Shaw With WIns In LA

The fight card was the 3rd installment of of the Ring City USA series on NBC Sports Network.

Conwell, who defended his USBA and captured the WBC USNBC Junior Middleweight titles, beat up Ashkeyev throughout the contest as he pounded away at the body and landed heavy shots upstairs. Ashkeyev had a lot of swelling over his left eye from the constant offense of Conwell. Referee Jack Reiss stopped the bout in between rounds nine and 10.

It was a solid all-around performance from Conwell, who should improve on his to number-eight ranking by the IBF.

“I think I’m the only undefeated contender fighting,” Conwell continued. “And I think that means a lot – I’m making great progress and I’m ready for a bigger payday. The more I fight, the better I get. I’m only 23-years-old and I want to keep fighting.”

Conwell is promoted by DiBella Entertainment and Holden Productions.

Stephan Shaw remained undefeated with an eight-round unanimous decision over Lyubomyr Pinchuk in a heavyweight bout.

Shaw dominated the fight by using a pinpoint jab to set up some solid right hands.

Haven Brady, Navarro and Katzourakis all get Stoppages

This past Saturday night, three members of the Split-T Management stable all gained stoppage victories on three cards around the United States.

Brady beat up and battered for six-minutes until Land and his corner had enough, and the 18-year old native of Albany, Georgia raised his mark to 2-0 with both wins coming by knockout.

The fight was streamed live on ESPN+. Brady is promoted by Top Rank.

Heralded amateur David Navarro also is now 2-0 with two knockouts as he took out Jason Vera in the opening round of their featherweight bout at The Mohegan Sun in Uncasville, Connecticut.

Navarro dropped Vera with a wicked overhand right. Navarro followed that up with a vicious combination and the fight was stopped at 2:02.

Navarro, 21 years old of Los Angeles is under the guidance of Tim VanNewhouse, and the fight had highlights shown on the Showtime Boxing Special Edition broadcast.

David Navarro impressed with a RD 1 KO of Jason Vera in the #ColbertArboleda prelims 👀 pic.twitter.com/geuXa4UTxM

In Miami, middleweight Andreas Katzourakis stopped Brandon Baue in round three of their scheduled six-round middleweight bout at the Airport Hilton.

Katzouraks of Athens, Greece is 6-0 with five knockouts.