By Abu Mahmood: We are nearly there. Anthony Joshua and Tyson Fury both hold every single belt in the heavyweight division. Both have said they want to fight each other twice in 2021.

This article will explore strengths and weaknesses of both fighters. I will look at both men’s strong points in a fight, and I will also look at where they tend to have a bit of a flaw in their game.

We shall start with Anthony Joshua:

Notable examples would be the fights against Wladimir Klitschko, Carlos Takam, Alexander Povetkin. in these fights; he showed he could stand there on be willing to trade with ferocious punchers.

Joshua started his career by always being on the front foot and wanting to get his opponents out of there as quickly as possible. Expect to see Joshua keep that same mentality when he fights Fury. 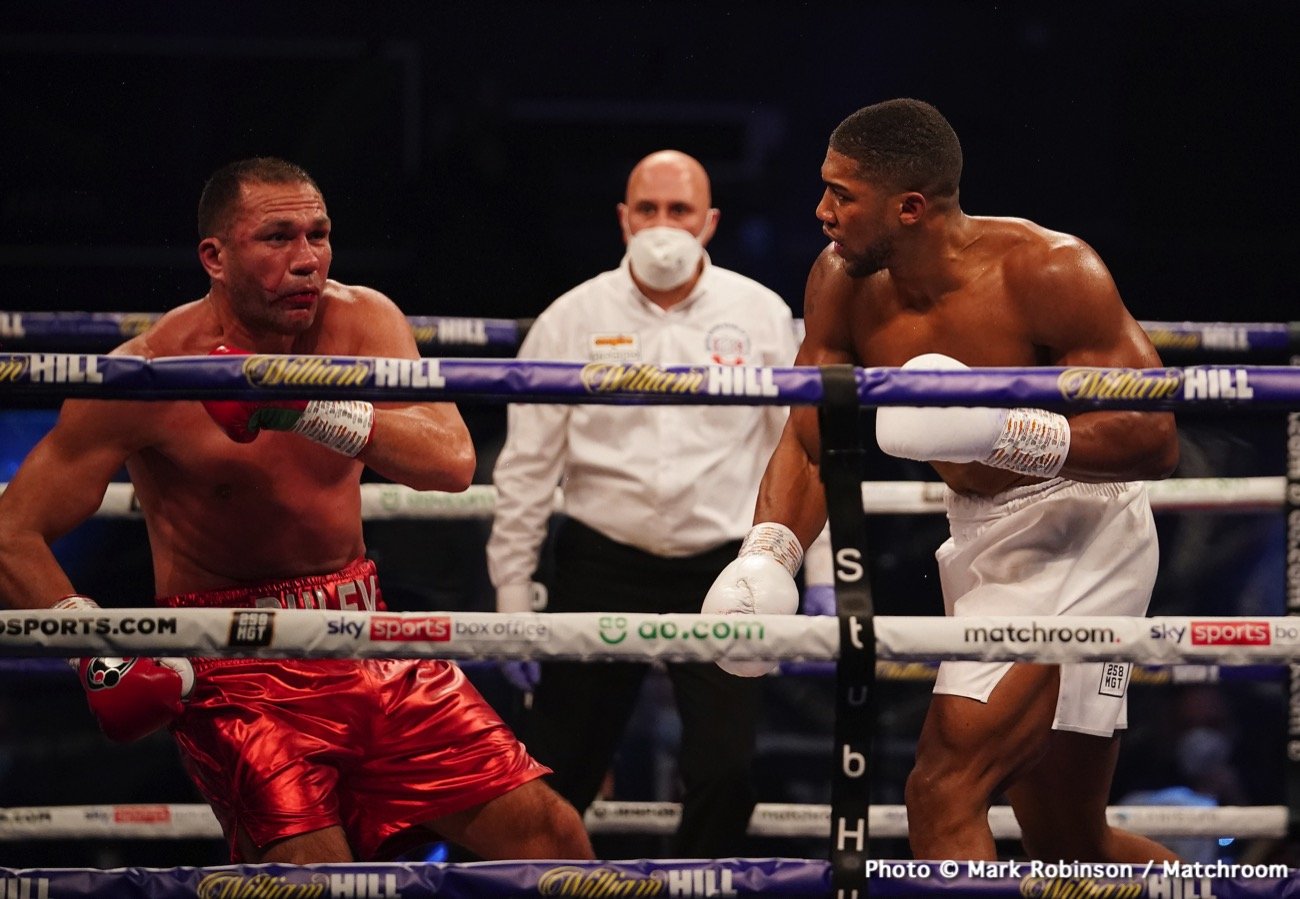 Uppercut: The uppercut has always been a vital part of Anthony Joshua’s game plan. In fact, the most famous uppercut Joshua landed was against Wladimir Klitschko. In his fight against Kubrat Pulev, he was throwing two or three uppercuts consecutively, which was new to his style of fighting.

As we saw from Billy Joe Saunders’s fight against Chris Eubank Jr, there is pressure involved when having to fight in front of a massive crowd.

Chris Eubank Jr gave away arguably the first half of the fight to Billy Joe Saunders as he was not prepared to fight on a big stage. Anthony Joshua has gotten rid of these nerves as he has always been fighting on a big stage.

Chin: There is no doubt Joshua has problems with his chin. Klitschko, Povetkin, Whyte, Andy Ruiz Jr have all exploited this flaw, and we saw Joshua looking very tentative in his rematch with Andy Ruiz Jr.

It was clear to see that Joshua did not want to get into a brawl with Ruiz Jr because he did not want to risk another ko defeat, which would have likely ended his reputation of a box office star.

Tyson Fury may not be renowned for his power, but he will manage to ask questions of Joshua when they fight.

Struggles to fight on the back foot: Joshua cannot fight when the fighter in front of him is pushing the pace. Andy Ruiz Jr pushed the pace from the first round of their first meeting and managed to stop Joshua.

Joshua has a bad habit of keeping a high guard when the pressure is on him, which opens the opportunity for body shots. Ruiz Jr took the opportunity, and Joshua tired out quicker than he wanted to. Klitschko didn’t throw the body shots when he had Joshua hurt, and ultimately it cost him the fight.

Switch-hitter: One thing that a lot of people have forgotten about Tyson Fury is that he can switch stances and box comfortably in both the orthodox and the southpaw stance.

Tyson Fury will look to box Anthony Joshua and confuse him by switching stances multiple times during the fight. We saw Tyson Fury stop Derek Chisora in the 10th round of their rematch while in the southpaw stance.

What many people do not realize is that Fury fought most of the fight in the southpaw stance. This gives Tyson Fury a big advantage heading into this fight against Joshua.

If you really can comfortably manage to box Joshua using both stances, then this fight will turn into a 1-sided unanimous decision loss for Joshua.

We saw Tyson Fury take away the right hand of both Klitschko and Wilder in those fights. Dr. Steelhammer failed to throw his right hand due to Fury’s awkward style, which had Klitschko fearing a counter.

In the 12th round against Deontay Wilder, we saw Tyson Fury get up and then you that same ring IQ to friend off the massive attacks of Deontay Wilder.

We saw Fury dominate Wilder in the rematch, and this was due to Fury pushing the pace and ducking and dodging the shots of Deontay Wilder.

We have seen this many times with Tyson Fury where he has underestimated his opponents and either been hurt or been dropped in those fights.

Nikolai Firtha, Nevan Pajkic, Steve Cunningham, Joey Abell, and Otto Wallin all troubled Fury, either knocking him down or managing to rock him.

Now, take a good look at the list of names; aside from Cunningham and Wallin, there is no one that should have troubled a world class fighter like Fury.

Fury underestimates his opponents too often. The way he has been talking about Joshua gives this writer the perception that Fury could be licking his wounds if he does not take this fight seriously.

Counter Right Hand: Tyson Fury has been knocked down twice in his career by the counter overhand right by Nevan Pajkic and Steve Cunningham.

Even the right hand that Wilder landed was when Fury thought he had the fight in the bag, and he very nearly paid the price. He had to settle for a draw due to his confidence getting the better of him. 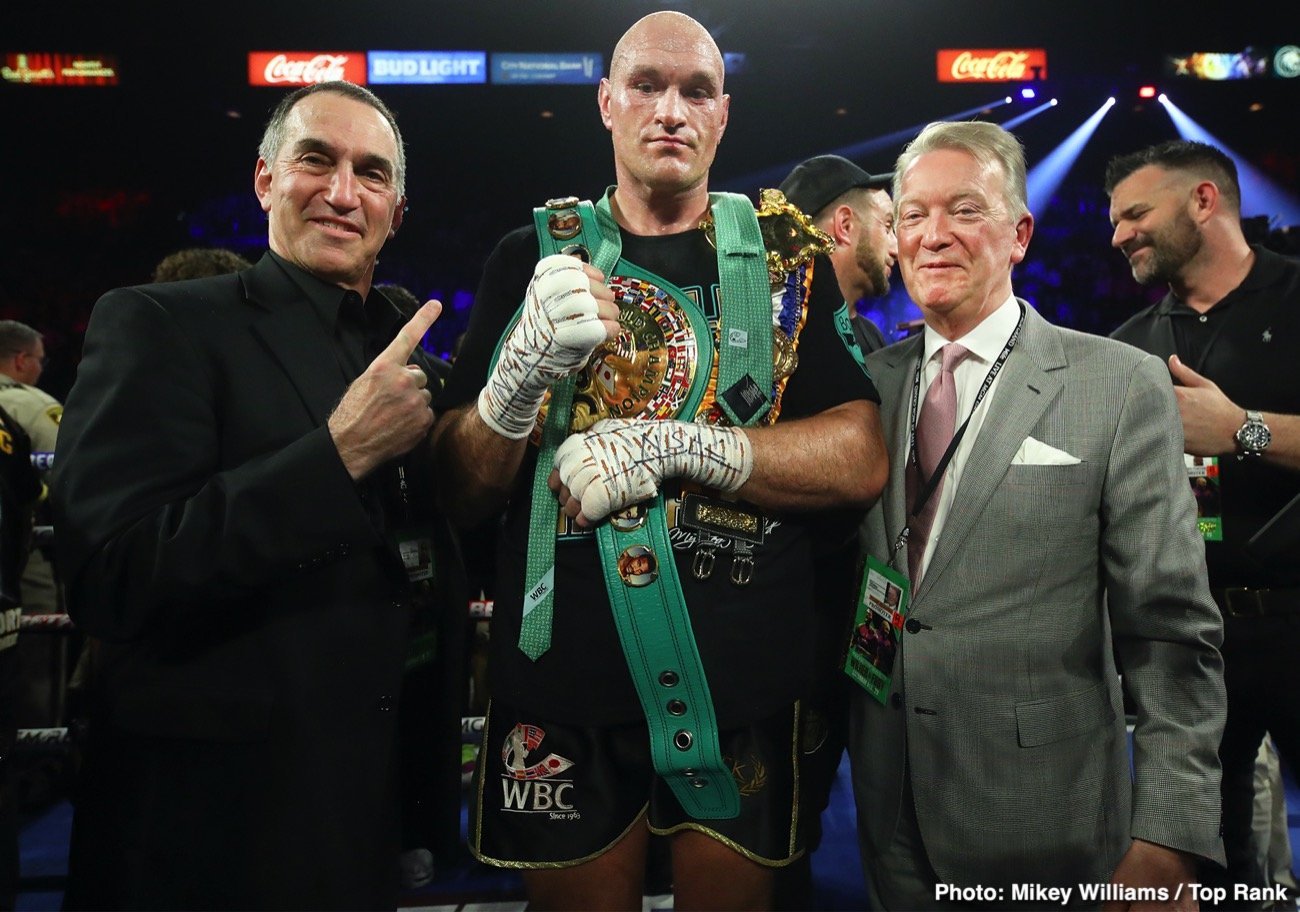 Many people are excited about this fight, which will surely go down in the history books. The fight could take place in May of 2021, which would give enough boxers enough time for the rematch.

However, Joshua should fight Usyk first to get rid of his mandatory for the WBO instead of relinquishing it. In the meantime, Fury should fight Wilder a 3rd time.