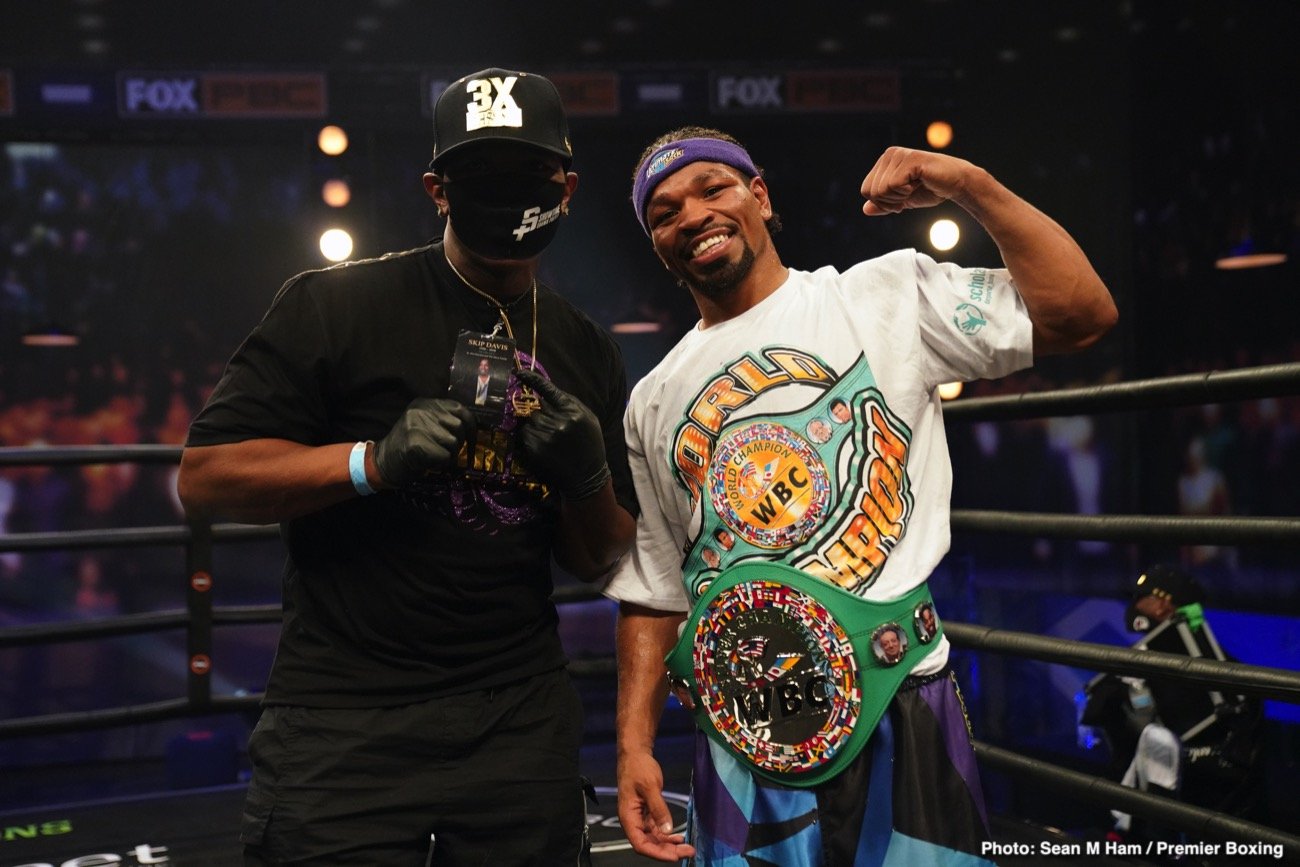 By Chris Williams: Shawn Porter liked what he saw from Terence Crawford last Saturday night with the ‘W’ he picked up against former welterweight world champion Kell Brook.

Crawford won’t have time to figure out a game plan on the fly, warns Porter. He’s going to have to come into the fight with a game plan and not just figure it out as he goes, Porter says.

The former IBF welterweight champion Porter is interested in facing Crawford in 2021, and he doesn’t want to give away the game plan that he’ll be using. But Porter will be putting unrelenting pressure on the 33-year-old Crawford from the opening round, and he’s going to need to be able to fight under duress.

Brook could be a bad style match-up for Crawford, who is a counter-puncher. Those types of fighters struggle when dealing with pressure fighters who throw a lot of punches the way Porter does.

If Crawford takes this fight with Porter, don’t be surprised if the Omaha, Nebraska native tastes defeat for the first time in his career. Crawford has never fought a pressure fighter, and he was losing to the shot 34-year-old Brook before stopping him in the fourth.

“I think we saw a sharp Kell Brook for three and quarter rounds, and then the southpaw Terence Crawford showed up and pulled out a weapon and boom,” said Shawn Porter.

“He just seems to be more effective as a southpaw,” Porter said of Crawford. “I don’t want to give it away until I fight Crawford. “And I don’t think he has an X’s and O’s the way that some of us do with our game planning.

“I just think that he has, ‘These are my X’s and my O’s, let me start feeling in the squares as the fight goes on,'” said Porter.

Crawford’s bad habit of fighting without a game plan could be a disaster when he gets in there with Porter, who will have done his homework. He won’t lazily come into the fight, thinking he can adapt on the fly.

“It’s no secret that with me, I’m a fast starter,” said Porter. I don’t like to get in there and feel it out. The way that I figure out what a guy wants to do and what I can do is by basically making him react.

“You better come to the ring and know whether you’re fighting southpaw or orthodox. I’m telling you right now because if you think you’re going to want to figure it out, I’m not giving you time to say, ‘Let me see how this works.’ You’re saying, ‘Either it’s working or it ain’t,’ you know what I mean?” Porter said.

If Porter can put massive pressure on Crawford, it’s going to throw his whole counter-punching game into disarray, and he could go to pieces. Counter-punchers and switch-hitters tend to fall apart when they have to deal with too many punches and pressure.

If you have seen some of the classic counter-punchers, they don’t deal with heavy pressure because their form falls apart when they’ve overloaded. It’s too much input for them, and they can’t counter everything that’s coming at them.

Crawford does well when he’s allowed to fight at a snail’s pace, as we saw last Saturday night. Brook allowed Crawford to fight slowly by being timid and afraid to let his hands go, which hurt his chances of winning the fight.

To beat Crawford, you can’t be afraid to get your feet wet. If you do that, you’re going to lose because he needs the fight to be fought at a glacial pace so that he can rest and have the energy to counter.

Shawn would pressure Terence out of the gate

“It was good; all you need to do is win rounds,” Porter said of Kell’s approach to the first three rounds against Crawford. “But for me, what I do is not only try to win rounds, but I also try to present challenges out the gate.

“Then again, when you start to answer questions, I start to see different things, then the fight starts to play the way it plays. But what I think everyone is saying now is the jab could be the key to success.

“The thing that I liked about the [Crawford vs. Brook] fight, and this is who I am. You talk about Kell Brook being good with his timing. His timing is based upon you coming in.

“Terence is straight up, ‘What do you want to do?’ It was a little bit of a waiting match at first. But who was the first one to throw punches? It was from Kell Brook.

“It’s not a bad thing, but you could tell when he [Brook] threw that punch, it was like, ‘We’re both standing here; let me get this out there.’

“That was what Terence needed to start reading the book. It took some rounds, but what I saw was all you need to do is jab me all night. You’re not going to double up on the jab,” said Porter.

Crawford knows what would be in store for him if he were to defend his WBO 147-lb strap, which is probably why he’s not shown a desire to fight him. It’s a horrible style match-up for Crawford, and it’s not surprising that he’s not taken the fight.

Porter knows what he sees when he watches Crawford fight. That’s food for Porter. If you were to create the perfect opponent for a pressure fighter like Porter to beat, you would end up with Crawford.

Porter a big fan of Crawford’s

“It landed. It became a matter of time for Terence Crawford. That’s my dude; I’m a fan of the dude. He’s a really good boxer and a good athlete. You see it all in the ring. With some guys, you really just see them as a fighter or as a boxer.

“With him [Crawford], you see him as a boxer and as an athlete, being able to make the right move at the right time. Looking at his eyes, you can see him thinking, and you see him calculating.

“That’s professional boxing right there. He did it by losing the first couple of rounds if that’s how he felt. It was a slow start for him trying to figure out his distance, but you could see him calculating, and it all came together for him. He does it every time.

“In my personal opinion, so is Terence Crawford,” Porter said of him being one of the best like Canelo Alvarez. “I get it; some of the guys he fought might not have been the best at their point in times, but he’s good,” said Porter.

Shawn was clearly licking his chops when he watched the aging Crawford struggle his way to a victory over Brook last Saturday night. Rather than scare Porter off, he’s even more motivated to fight Bud and deal him his first defeat.

With Crawford likely to leave Top Rank in 2021, Bob Arum needs to feed him to Porter before leaving the company. Arum says he’s lost a lot of money on Crawford’s last three fights.

It would be a good idea for Arum to stop the mismatches and put Crawford in with Porter and let him see what happens. It might be a feeding frenzy with Porter having a field day.

« Floyd Mayweather to fight on Feb.28th in Tokyo Dome