The unbeaten Garcia (20-0, 17 KOs) told his millions of followers that Tank’s brutal one-punch knockout of the former four-division world champion Santa Cruz isn’t going to make him change his mind about wanting to fight him. Indeed, ‘King’ Ryan says, “It’s my turn next.”

Tank, 25, was having problems with Santa Cruz’s high work rate and counter-punching through the first five rounds of the fight.

Tank took away the hope of the 9,000+ pro-Santa Cruz crowd at the Alamodome when he landed a scorching left uppercut in the sixth round that knocked Leo cleanout.

Santa Cruz hit the deck without even attempting to brace his fall. Referee Rafael Ramos immediately stopped the contest at 2:40 of the sixth in giving Davis the win. 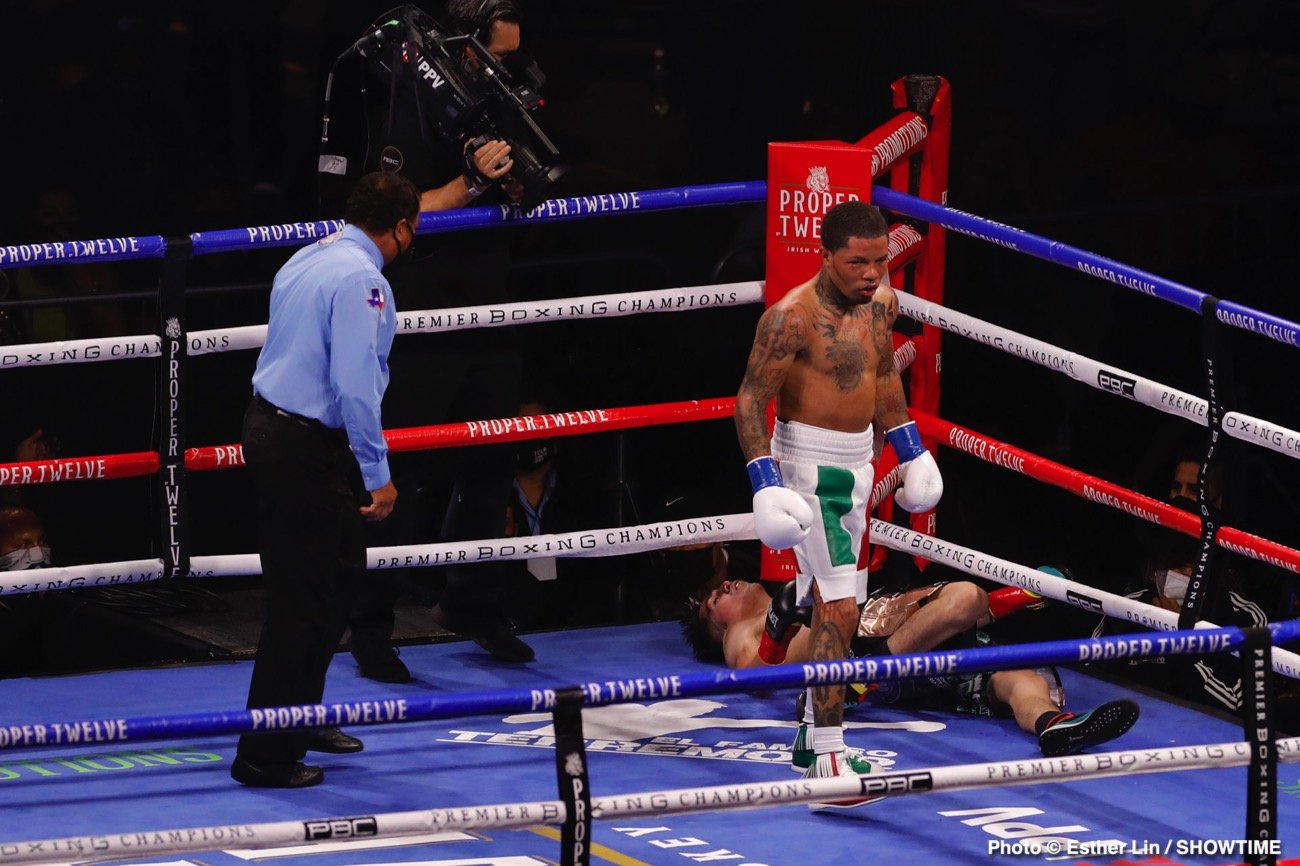 Ryan Garcia, #2 WBO and #3 WBC, still needs to beat Luke Campbell (20-3, 16 KOs) next month on December 5th to fight on DAZN at the Fantasy Springs in Indio, California.

Before Ryan can start talking about fighting Tank Davis for his WBA ‘regular’ lightweight crowd, he must beat the 33-year-old Campbell.

The World Boxing Council recently ordered Campbell and Ryan to fight for the interim WBC 135-pound title, with the winner to be ordered to face WBC champion, Devin Haney.

WBC president Mauricio Sulaiman still wants the Garcia-Campbell winner to take on Haney (24-0, 15 KOs), but that doesn’t look like it’s going to happen. I mean, if Campbell beats Ryan, he’ll likely face Haney, as that’s a fight that he wants.

Ryan has tunnel vision right now, and the only thing he wants is to take on Tank Davis after he deals with Campbell.

You’re outta your mind if you think that makes me waiver! It’s my turn next and then it’s on!!! LETS GOO 🥊🥊

Davis will likely be a big favorite over Ryan Garcia when or if that fight takes place next year. There’s a lot of money that will be made on that fight if it goes down next year.

With the social media following that Ryan, Tank, Floyd Mayweather Jr, Golden Boy Promotions, and Canelo Alvarez have, millions of fans will be alerted about the Tank vs. Garcia fight.

Tank is glad Santa Cruz is okay after knockout

“When I hit him and saw that he was falling, I had already turned, and then I looked at him and went into a different mode. ‘Damn, is he okay?’ I’m glad he’s okay.

“The first couple of rounds I was a little cold, I would say, because there were shots he touched me with that I’m not supposed to be touched with.

“There’s a lot of pressure, and you want to get off and things like that. I looked at Floyd, and Floyd was saying, ‘Calm down, we’re going to get him’ He always tells me, ‘We’re a 12-round fighter.’

“But me, I’m so anxious. When I get in there, I’m trying to get at him. It’s all about learning. I’m learning to slow my pace down through the rounds,” Tank Davis said. 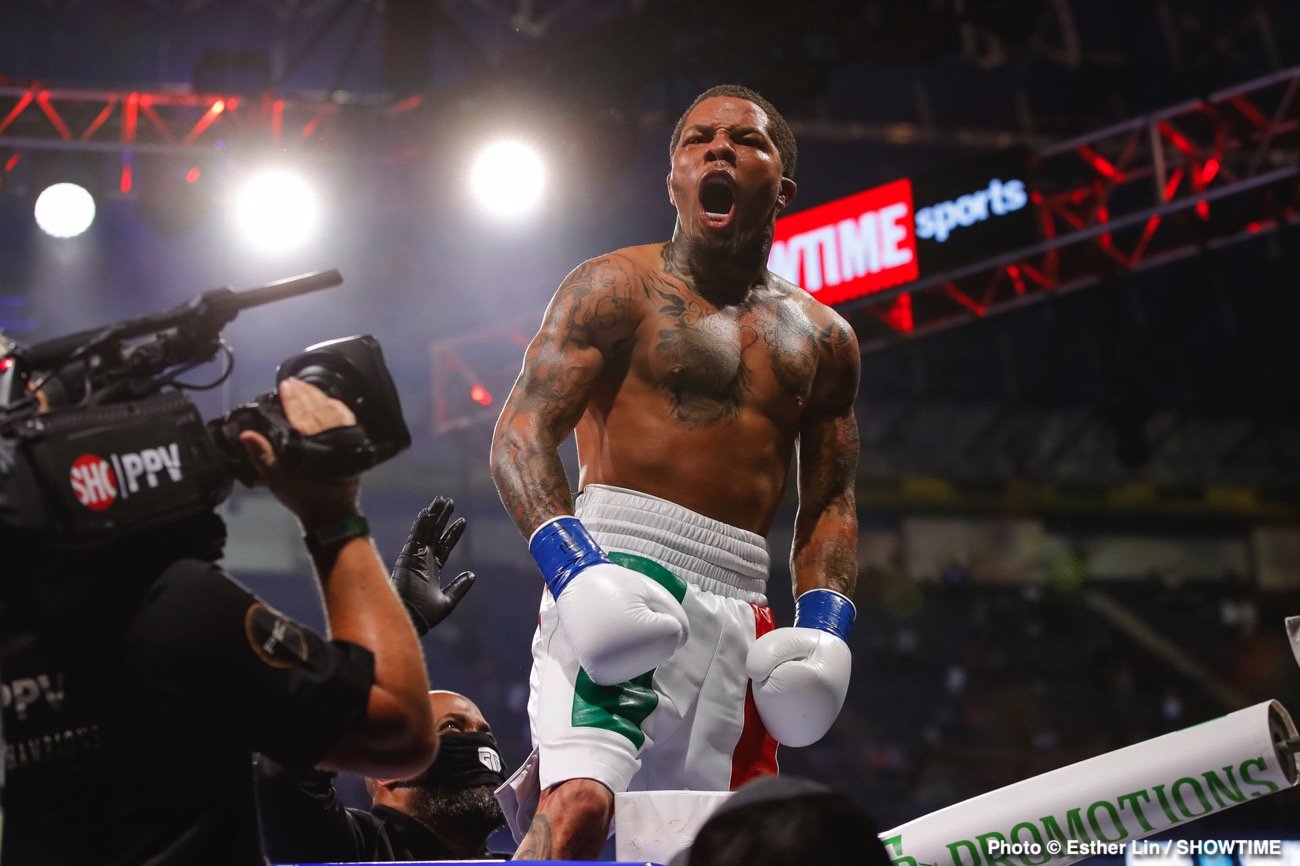 The way that Santa Cruz fell after getting nailed by a left uppercut by Davis in the sixth, he looked seriously in dire condition. Santa Cruz laid on canvas, face-first without even stirring.

A knockout like that is hard to look at, but thankfully Santa Cruz is alright. Whether this will impact the remainder of Santa Cruz’s career moving forward is still too early to tell.

We’ll have to wait and see how Santa Cruz reacts to getting hit in his next fight before we can make a judgment on that.

Gervonta’s adjustments led to the knockout

“In the first round, I could see that when I’d throw my jab, he’d try to counter me,” said Davis.

“So when I’d throw a jab, he’ d throw a jab, right-hand, jab. So I knew he was coming with more than one punch,” Davis said of Santa Cruz. “As I went further in the rounds, once I’d throw my punch, I’d get out of the way.

“I think I was breaking him down leading into the fourth or fifth round, but you know when your body is telling you can’t do it, but your mind is telling you can. That’s how he was. I knew he was a fighter with a lot of heart because his mind was telling him, ‘Keep pushing.’

“We definitely worked on it, but it was me adapting to the ring time,” Davis said of his uppercuts that he was landing against Santa Cruz. “I didn’t shy away from the uppercuts once he started coming in, but he was blocking at first.

“Sometimes, I would not throw an uppercut and would come around, and those were the shots that I was catching him with, but it was just me adjusting to him,” Gervonta said of Santa Cruz.

Davis was looking for the uppercut from the first round, and, surprisingly, Santa Cruz chose to fight him in close through most of the fight.

« Usyk says Joshua must fight him next or vacate WBO title