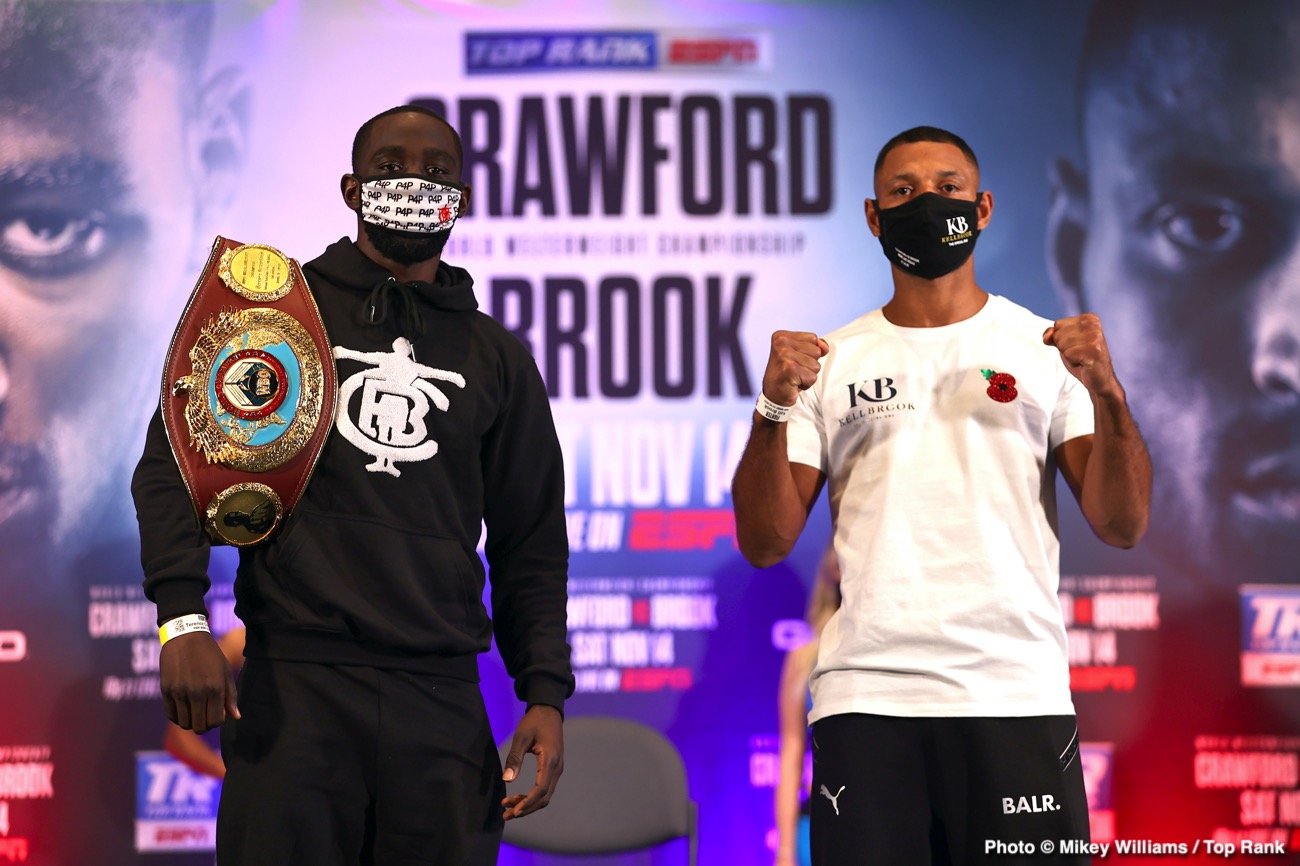 By Jeff Aronow: WBO welterweight champion Terence Crawford better look out tonight because Kell Brook is highly motivated and will be looking to dethrone him. Brook (39-2, 27 KOs) wants to become a two-time world champion, and he believes he’s got the size and the power to unseat Crawford (36-0, 27 KOs) to end his two-year reign.

At 34, Brook has probably never looked better than what we saw from him at the weigh-in last Friday afternoon. Weighing in at the welterweight limit at 147-lbs, Brook was completely shredded and not nearly as emaciated as we saw from him against Errol Spence Jr in 2017.

After the weigh-in, Brook gleefully told Crawford that he plans on rehydrating to 170 lbs by the time of the fight, which, if true, is huge for a welterweight. That’s the kind of weight that middleweight champion Gennady Golovkin rehydrates to for his title defenses.

“I’m going in there to be a two-time world champion,” said Brook to the Pug & Copp show. “He started out at lightweight. I’m a natural welterweight, a big welterweight at that, who campaigned at middleweight and light-middleweight.

“So he knows he’s got a real fight, and you should know this too. You’re looking at the man that is going to be #1 in the world,” said Brook.

“Kell is up against it, that’s obvious,” said Darren Barker to IFL TV. “Terence Crawford has beaten everyone put in front of him. Looking at it like that, I can understand why people are saying he’s got no chance.

“Kell Brook, you’ve got to remember that he comes from the Ingle gym where they all got unorthodox styles. Kell is used to it. I’m not comparing the people he sparred with at that gym to Terence Crawford.

“What I’m saying is, he’s used to them unorthodox styles and switch-hitters. Kell is used to that. That’s his bread & butter. He’s been doing that since he was a kid,” said Barker.

If Brook is the fighter that he was for the Spence and Gennadiy Golovkin fight, he’s got a real chance of beating Terence tonight. All that size, power, and skills that Brook brings would be a nightmare for Crawford.

Brook punches like a middleweight, which is why he Golovkin problems in their fight in 2016. Golovkin was facing middleweight but with a smaller, more agile frame at the time. Since then, Brook has grown, and he carries that weight naturally.

We don’t know how depleted Brook will be from having to drain down to 147 for the weigh-in. If Crawford wanted to receive credit from the fans, he would have met Brook at 154, but that’s not happening. Brook, at full strength, would be a scary proposition for Crawford.

“With Terence Crawford, I’m not sure how many people he’s been up against that fight like Kell Brook and punches like Kell,” Barker continued. “I think one of the issues is how strong Kell will be at 147?

“He won’t have to do the IBF weigh-in in the morning, which I’m sure will be good for Kell. He’s fit and strong, and I’m sure he is.

“I wouldn’t rule him out because, as I say, he’s used to that awkward switch-hitting style. He’s up against it, but I’ll be cheering him on.

“The narrative is similar. You go up against a fighter that is feared and one of the best pound-for-pound, which Shawn Porter was at the time,” Barker said in comparing Brook going up against Crawford to how when he took on Porter in 2014.

“Stylistically, the fight is completely different. These are what my own thoughts are in watching them both fight and doing a bit of research in the build-up; I have to say that Kell is used to that style of fighting.

“He’s not going to be phased like some fighters.  I don’t think Kell is going to be unsettled,” Barker said.

Crawford will need to do more than switch-hit if he wants to confuse Brook, as he’s accustomed to fighting guys from southpaw and orthodox stances. The switch-hitting that Crawford is overrated.

That’s not why Crawford wins. Most of the time, when Crawford does change stances, there’s no gain. He does it, and the ESPN commentators like Max Kellerman get excited about it, but Crawford doesn’t suddenly benefit. It’s gimmicky.

Ryan Garcia vs. Luke Campbell to be announced soon for new December date »