By Charles Brun: Joe Joyce’s mother did a little bit of gloating last Saturday night after ‘The Juggernaut’ battered the previously unbeaten Daniel Dubois to pieces until he dropped to one knee and quit in the 10th round at the Church House in London, England.

Joyce’s mother, who Daniel had mentioned during a news conference months earlier, pointed out that he “quit” last night when chose not to continue in the 10th. She hopes that the 23-year-old Dubois learned his lesson from the defeat, and will “respect his elders.”

Dubois (15-1, 14 KOs) came into the fight with the 35-year-old Joyce with a six-fight knockout streak, and it was assumed that he would be too much for the 2016 Olympian.

It didn’t work out that way, as Joyce tagged Dubois with jabs all night, bloodying his nose and busting his left eye socket. Dubois had knocked out most of his previous opponents within five rounds, and he hadn’t dealt with any adversity during his career.

Dubois’ lack of experience was a recipe for disaster, and unfortunately, his promoter didn’t see it coming ahead of time.

Joyce’s mother to Dubois: “You quit”

“Usyk, we’re coming to get you,” said Joe Joyce’s mother following his win over Dubois. “I’ll never forget that fight at York Hall when Joe fought him.

‘Joe was just a novice, he had just started boxing, and Usyk, I think, was a double gold medalist, and he did really well against Usyk. But I don’t know if he [Usyk] will do so well this time if they have another one.

“When it happened, I didn’t actually hear what he was saying,” Joyce’s mother said about Dubois making a comment about her during a news conference months ago.

“It was only afterward when everyone was chatting, ‘Do you know what he said?’ When I heard that, I thought, ‘Wow, that’s really out of order,’ but it was too late.

“And now he’s got his eye all busted up, and he knows what it’s like not to see. Now a message to you Dan Dubois; you quit. I saw you quit. Actually, I didn’t. I want to watch it back on TV with my binoculars like this. Get well soon, Daniel. Get well soon,” said Joyce’s mom.

It’s not the end of the world for Dubois now that he’s suffered his first loss. As long as his eye problem is taken care of, he can rebuild and eventually get back to the world stage. 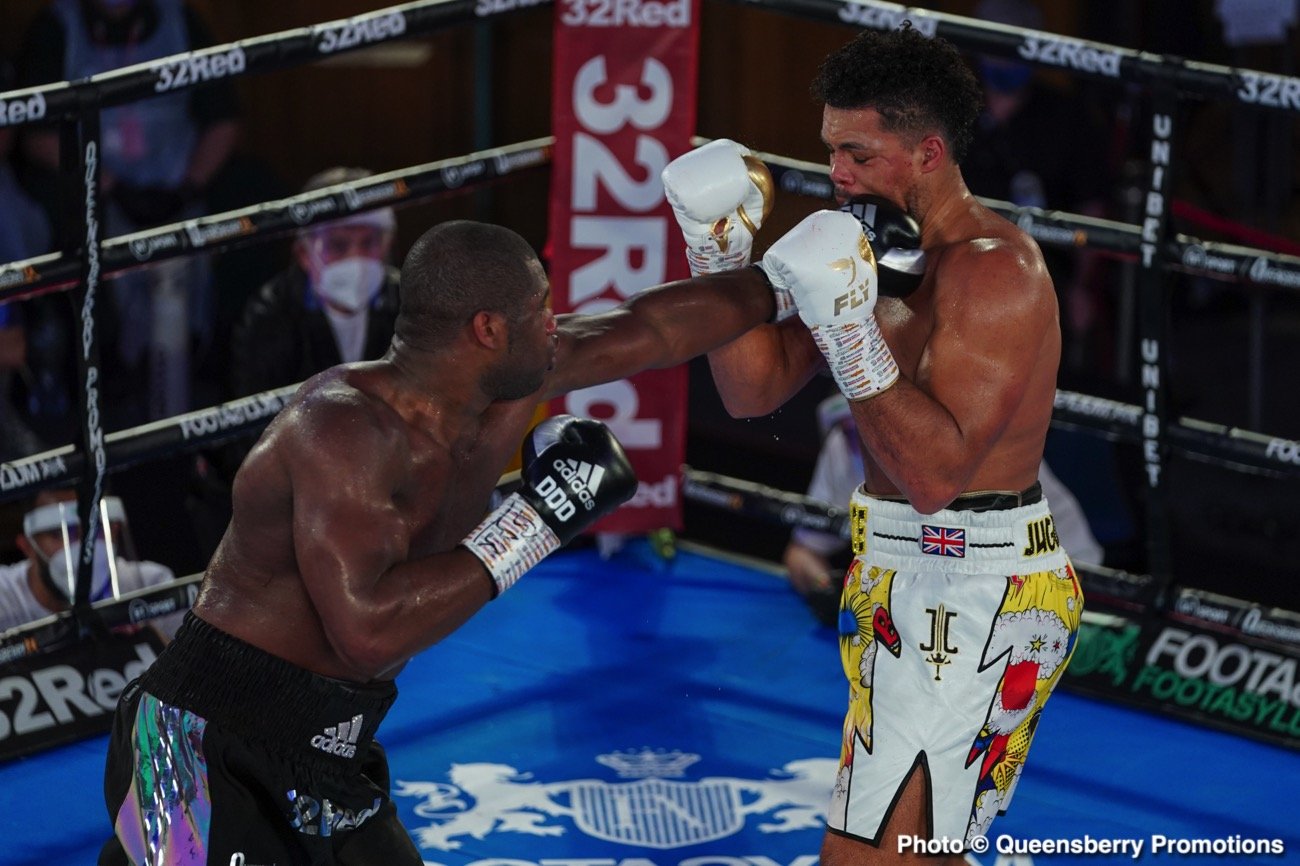 Dubois needs to step it up

It’s time for Dubois’ promoter Frank Warren to begin matching him against better opposition so that he can have some learning fights that he can build on Dubois is never going to improve if Warren doesn’t step him up against world level fighters.

Dubois should be matched against these type of fighters to rebuild properly:

If Dubois fights six or seven of those guys, he should learn enough for him to improve his game to get ready for a world title shot.

“It was a great night, I got the belts, and the future looks bright,” said Joyce in reveling in his victory. “There’s a world title shot coming up next, and I just can’t wait,” said Joyce.