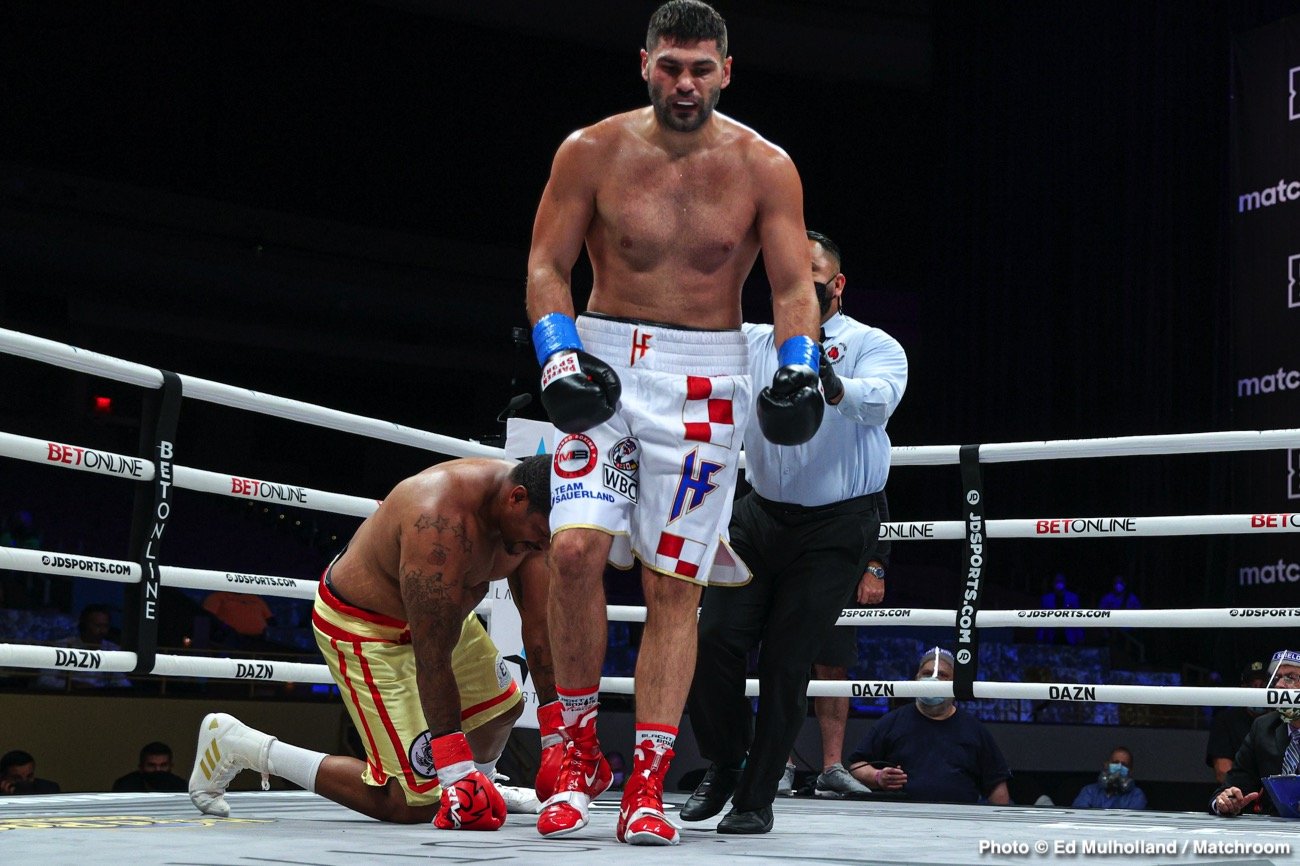 By Allan Fox: Undefeated heavyweight contender Filip Hrgovic (12-0, 10 KOs) methodically broke down his old sparring partner 38-year-old Rydell Booker (26-4, 13 KOs) in stopping him in the fifth round in a two-knockdown performance on Saturday night at the Seminole Hard Rock Hotel in Hollywood, Florida.

In the end, the 6’6″ Hrgovic landed a series of hard headshots that led to referee Samuel Burgos waving it off at 043 of the fifth. Brooker complained about the stoppage, but the referee did the right thing.

Hrgovic was teeing off on Booker while he was backed against the ropes, and it was disturbing to watch wasn’t competitive.

As one of DAZN’s commentators said, it was like watching Hrgovic working out on a punching bag.

Hrgovic’s power, combination punching, and poise were excellent. What he didn’t do well was move his head and get out of the way of shots. Hrgovic was literally a ‘Stone man,’ which used to be his nickname until it was changed recently to ‘El Animal.’

If Hrgovic doesn’t start moving his head, he’s going to get knocked out when he steps it up against the elite.

NEWS:   VIDEO: Examining the history of the WBA heavyweight title

After the fight was over, Hrgovic walked over to Booker and put his arm around him, and said, ‘You’re too old.’ Hrgovic didn’t mean it in a hostile way, Booker pushed him away to let him know that he didn’t appreciate the remark. Telling your opponent that they’re “too old” isn’t the best way to console them after a loss. Hrgovic didn’t realize.

One of these days after he eventually gets beaten, it’ll be interesting to see how he feels if his opponent comes up to him and tells him, ‘You’re too slow’ or whatever. It’s likely that Hrgovic won’t react well to the comment.

Hrgovic has got to step it up already against better opposition because it’s wretched watching a 2016 Olympic bronze medalist continually take on poor opposition year after year without being stepped up against world-class fighters. If Hrgovic didn’t have a long amateur career, it would make sense for him to be matched the way he is.

Hrgovic called out these heavyweights after the fight:

With the huge list of heavyweights that Hrgovic called out, he’s bound to get at least one of them to agree to fight him. Michael Hunter isn’t likely to say not, and Hrgovic could retreat mentioning his name.

“I think my performance was good. From the first bell, I dictated the pace, and I throw a lot of punches and I land a lot of punches,” Hrgovic said after the fight. “I think the referee did a good job to stop the fight. Yeah, I was surprised.

“He’s really tough, and I thought he was going to go down before,” Hrgovic said when asked if he’s surprised that Booker took so much punishment. I was a little stiff, and a little too tight. I should have let him throw more and then counter punch him and then he’ll go down for sure.

“I didn’t stop throwing punches, and he was all the time covered but I did a good job. He was a very good sparring partner, but I think he improved after the sparring session. After the tough life that he had, and he’s almost 40-years-old, heads up for him for preparing so good and giving such a great fight.

Hrgovic calls out the top heavyweights

“I want a hard fight. A lot of these Instagram boxers that are just talk and no one wants to sign the fight with ‘Da Animal. I think for the guys you mentioned, I need to step up a little bit more in competition.

“I have to have a couple of hard fights and big names a level below these guys that you mentioned. So I’m looking for these type of fighters.

“Michael Hunter, Zhilei Zhang, Joyce, Daniel Dubois, whoever,” said Hrgovic in calling out the fighters that he wants to fight next. “Povetkin, Dillian Whyte, Chisora, I want all these guys to fight and to beat. This will be my preparation for the best in the division,” said Hrgovic.