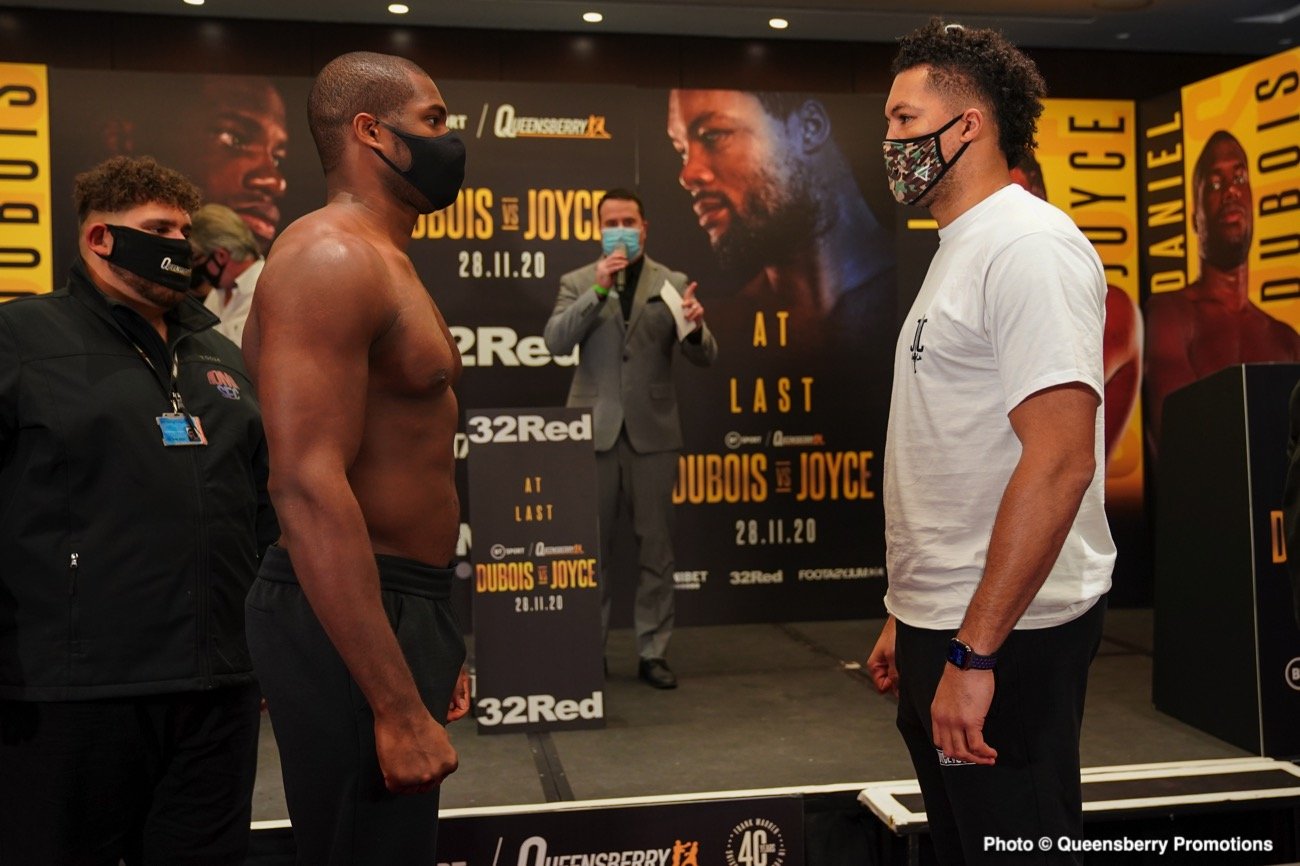 By Charles Brun: Daniel Dubois weighed in at 244 pounds on Friday for his heavyweight match against Joe Joyce this Saturday night at the Church House, in Westminster, UK.

Dubois-Joyce is a 50-50 fight on paper, although Dubois is viewed as the favorite. Dubois has zero experience against quality opposition during his three-year pro career, and his amateur career was too short to learn anything about his pedigree.

What we can say is Dubois’ promoter has matched him carefully and kept him out of harm’s way.

Joyce (11-0, 10 KOs) weighed in at 258.9 lbs, which is considerably lighter than the 270 lbs he weight for his previous contest last July against German heavyweight Michael Wallisch.

We’ll see if the drop in weight will help the 2016 Olympic silver medalist Joyce or hurt him. He’s going to need more speed, and a better engine to wear down Dubois to knock him out.

Dubois (15-0, 14 KOs) and Joyce, 35, will be fighting for the vacant EBU heavyweight title in this BT Sport televise, Queensbury-promoted event. Both fighters are very slow and robotic, and it’s difficult to imagine either of them winning a world title anytime soon.

Dubois vs. Joye winner could fight for the world title

The winner of the Dubois vs. Joyce fight’s best chance of capturing a world title is if Anthony Joshua vacates his WBO title, which would leave it vacant for it to be fought over. It would be the Joyce vs. Dubois winner facing #1 WBO Oleksandr Usyk for the vacant belt, and there’s a real possibility that’s what will happen.

Although the 23-year-old Dubois’ promoter Frank Warren is high on him, he’s too mechanical and lacks the physical tools needed for him to beat the current world champions, Anthony Joshua or Tyson Fury.

Boxing News 24 is picking Joyce to win on Saturday, considering he’s got better experience than Dubois, and he has the superior experience. We saw how limited Dubois is when he fought 40-year-old journeyman Kevin Johnson a couple of years ago.

Dubois: I intend on destroying him

“It’s going to be me and him just business,” Dubois said about Joyce. “I’ve got to be there in my mind from the start straight away. It’s going to be a rough fight, and I’m ready for it.

“I’m sure he can come back again,” Dubois said of Joyce. “This might not necessarily be the case of words that are said in the moment. This is a fight. My intentions are to go out and destroy him. What will be will be, but I’m 100% looking forward to going out there and rumbling and doing my job.

“It’s part of the game, and I’m glad I’m moving forward towards it really quickly,” said Dubois when asked about the possibility of him facing Oleksandr Usyk for the WBO title if Anthony Jacobs vacates his belt.

“It’s been an interesting journey so far in my career. If that materializes, then I know what it’s all for in winning the WBO belt. They put me high in their rankings.

“This is the fight that will determine if I’m fighting for a world title my next few or next fight. My mind is fully focused on this fight nothing else. This is a single-minded job, and I already have tunnel-vision for it.

Joyce will pull off the upset

“A devastating performance and a devastating win for me and a victory,” Dubois said when asked what’s going to happen on Saturday night. “I can’t wait for it, I’m bubbling right now. I really want to get out there and shine. It’s going to be a great night of boxing,” said Dubois.

Charles Brun will go out on the limb by picking Joyce to knockout Dubois by the sixth round. The problem is, Dubois’ promoter has been spoon-feeding him woefully poor opposition since he turned pro.

This time around, Dubois is facing a live body, and not someone his promoter dug up for him to bowl over after throwing a handful of slow punches. We already know Dubois’s stamina is completely lacking, and that’s bad news giving that he’s facing one of the best-conditioned heavyweights in the game.