Bob Arum: Crawford would stop Spence like he did Kell Brook

By Chris Williams: Bob Arum was on his soapbox last Saturday night following the fourth-round technical knockout of his Top Rank fighter Terence Crawford against a past his best Kell Brook in ‘The Bubble’ at the MGM Grand in Las Vegas, Nevada. Brook’s fragile mandible let him down in the fourth round after being hit with what was basically a jab.

In Brook’s losses to Errol Spence Jr and Gennady Golovkin, he took shots from another galaxy in terms of power compared to the weak shots that Crawford was hitting him with last night. Crawford can’t punch at the 147-lb limit, but his lack of power has been disguised due to the lesser opposition he’s been fed by Top Rank.

It’s pretty clear that Arum needs to make the fights between Crawford and Manny Pacquiao and Spence Jr. Not only is the soon to be 34-year-old Crawford starting to age out, but his contract with Top Rank is running out in 2021.

Arum calling Crawford a great after winning over Brook

“Terence Crawford showed, once again, why he is the best welterweight in the world. It was a dominating performance over a very good fighter in Kell Brook.

“Terence ranks up there with all the great welterweights I’ve promoted,” said Arum, who looked highly agitated with Crawford standing beside him.

Since when does a fighter become great after beating Brook? We already saw Golovkin and Spence beat Brook, and neither is being called an all-time great. Shawn Porter arguably beat Brook too in their fight in 2014, and he ended up losing a controversial decision. Is Porter great too?

The promotional company can’t afford to continue to match Crawford against washed-up fighters like Kell Brook, Amir Khan, and Jose Benavidez Jr. to make him look good. If Crawford can’t handle it against the best, oh well. At least Top Rank will finally know what they have in Crawford, and they can start over with someone else.

Hopefully, Top Rank doesn’t waste 12 years matching the next guy with the same type of opposition that Crawford has been fighting since he turned pro in 2008.

They’ve got to finally get it over with put Crawford in the deep end in a sink or swim situation. After 12 years of careful match-making, Top Rank has got to find out what they have in Crawford by putting him in with an elite fighter for the first time in his career.

Crawford won’t do well against Spence

Chris Williams hates to say it, but after the way Crawford looked last night against a shot Brook, he won’t do well against Spence, Pacquiao, Shawn Porter, Keith Thurman, Yordenis Ugas, or Vergil Ortiz Jr.

Last night’s Crawford-Brook fight was another example of Top Rank skillfully matching Crawford against another mediocre opponent to make him look good. Brook was just a shell of the fighter he was 1400+ yesterday’s ago when he got beaten by Gennadiy ‘Good Boy’ Golovkin in 2016.

We’ve seen this type of careful matchmaking by Crawford’s promoters for years, and this was just another example last Saturday with a washed-up Brook being used as the stable-horse. It’s all smoke and mirrors, let me tell you, and it doesn’t give a true picture of Crawford’s actual talent or lack thereof.

The Top Rank promoter Arum looked like his feathers had been ruffled during the post-fight interview by ESPN when asked whether Crawford would fight IBF/WBA welterweight champion Errol ‘The Truth’ Spence Jr (26-0, 21 KOs) next.

Crawford doesn’t look as good as the top welterweights in the current division, let alone better than the fighters that Arum has promoted in the past. Floyd Mayweather Jr would have schooled Crawford last night, and he wouldn’t have been caught by surprise by a simple right hook the way Brook was.

Crawford isn’t in the same stratosphere as the great welterweights in the past like Felix Trinidad, Oscar De La Hoya, Shane Mosley, and Terry Norris.

“You saw the performance tonight. I mean, he’ll take out Spence in about the same number of rounds like he took out Kell Brook.”

What was really interesting is how Crawford didn’t seem to be on the same page as Arum when he was talking about how Terence will beat Spence in the same number of rounds as he did against the hapless Brook.

As soon as Arum stopped talking about Spence, Crawford said he wanted to fight Manny Pacquiao next. I mean, Crawford didn’t once mention Spence’s name during the entire post-fight interview with ESPN, which is telling. If Crawford isn’t even willing to utter Spence’s name, what does that tell you?

Arum might as well have been saying that Crawford would knock out Canelo Alvarez and Golovkin in the same number of rounds as he did against the shot Kell Brook because those fights have about the same amount of chance of happening.

In other words, if Arum is going to name drop talented fighters to build Crawford’s credibility in the eyes of casual boxing fans with scant knowledge of the sport, he should aim a lot higher than Spence.

There are more casual fans that know of Canelo and Golovkin than they do Spence. I’m a little disappointed in Arum’s efforts last night to name drop fighters to boost Crawford’s standing in the sport.

If you’re talking about fighters that have zero chance of fighting Crawford, you got to aim higher than Spence if you want to sway the fans’ opinions. 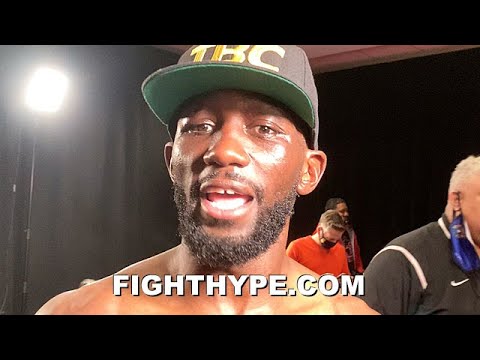 Is Terence now a knockout artist?

👑 LEFT NO DOUBT 👑@terencecrawford stuns Kell Brook with a big right hand and wastes no time closing the show in Round 4. Goodness … #CrawfordBrook pic.twitter.com/pvD56GdSdL

That wasn’t a “big right hand” that Crawford hit Brook with in the fourth round. On the contrary, it was more of a jab, but Brook’s chin isn’t what it used to be, perhaps due to what ‘Good boy’ Golovkin did to him in 2016 or maybe the negative effects of all the weight loss in coming down from 154 to fight Crawford at 140.

If you were to take Crawford next year when he’s 34 and ask him to drain down to 140 to take on IBF/WBA light-welterweight champion Josh Taylor, my guess is he wouldn’t do well after the weight loss.

Terence Crawford has gone from a slick boxing lightweight who would outbox you to a power punching welterweight who will knock you out.#CrawfordVsBrook

Kellerman is another example of someone seeing something that’s not there with Crawford. His power isn’t better. He was facing a shot and badly weight drained Brook last night, so, of course, he was able to hurt him with the jab-like right hook.

As bad as Brook looked, he would have been knocked out by pretty much all the top 15 contenders last Saturday night. It’s disingenuous for commentators like Kellerman to paint an inaccurate picture of the type of fighter Crawford is. He’s not turned into another Julian Jackson suddenly at age 33.

What we’re clearly seeing is Craword being matched against shot UK fighters in Brook and Amir Khan lately, and he’s not been facing the best.

It would have been nice if Crawford had accepted the challenge by Shawn Porter to fight him because that’s a fight that could have happened last Saturday night, and it would have been a lot more interesting to watch.

That jab that Crawford hurt Brook with in the fourth round wouldn’t have phased Porter, and he would have been all over him the entire fight. But again, it goes back to the skillful match-making that’s being done for Crawford by his promoters at Top Rank.

The casual boxing fans wouldn’t know the difference, but the hardcore fans understand how Crawford is being matched, and they’re not impressed in the least with his win over the shot Brook.