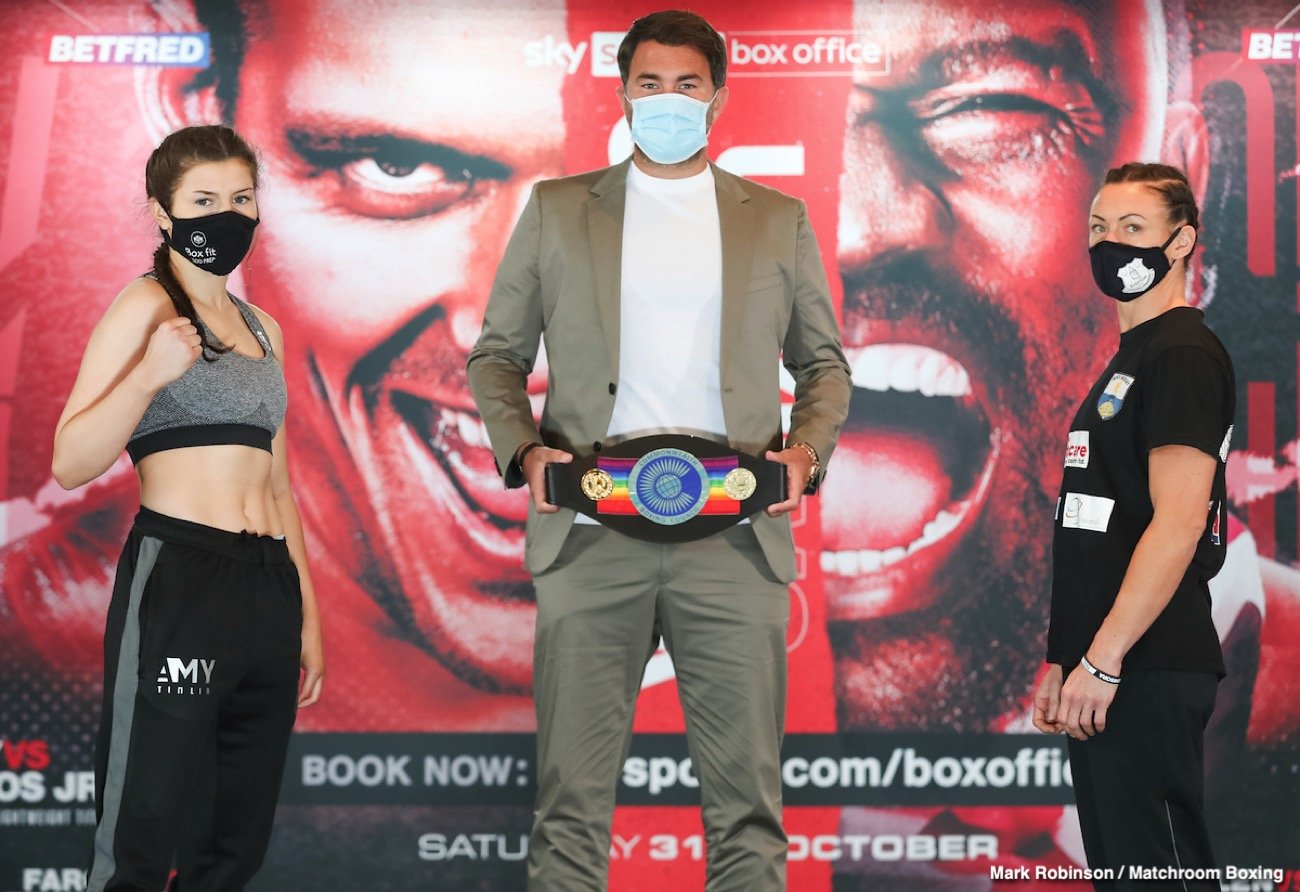 “I’ve been waiting a long time for this fight. I’ve been in a training camp for about five months now. To get this opportunity is amazing and I couldn’t have asked to be on a better platform. I know it’s going to be a cracking fight to watch on Saturday night.

“I like to think my style is exciting, I love a good tear up. It’s going to be exciting. I know that Carly is also an aggressive fighter so fans can expect a toe-to-toe war. Women’s boxing, especially in our division, is growing massively. Shannon Courtenay has a similar come forward style to mine so that would be a cracking fight.”

NEWS:   Rungvisai vs Sithmorseng live on DAZN on March 12

“I’m the same, come forward, and I love to fight! It’s going to be a good fight on Saturday. It’s a great opportunity, like Amy said, we’ve both been waiting for this fight for a long time. It has been on the card for a few months now. Nobody really knows me, but after Saturday that will change. I’ve had a lot of support from the likes of Derry Matthews and Darren Till.”

The unbeaten pair were scheduled to fight earlier this month but now find themselves on the undercard to Oleksandr Usyk’s monster fight against Derek Chisora.

Rising star Timlin (4-0) is tipped for a bright future, training under the tutelage of Kieran Farrell and managed by Dave Coldwell.

“I’m buzzing for this. I’ve been training throughout lockdown and I’m ready to go. This fight will push me on, it’s all about learning. The pressure is on her, Carly will come out all guns blazing but we’ve got a steady game plan. I can’t wait for the first bell, this platform is huge,” revealed Timlin.

“I’m really exited to have Amy on such a massive show like this. Thanks to Eddie for giving us a slot in these testing times. Amy is a fantastic fighter, at 20 years old I think she’ll show people in the next year or two she is the next generation of flag bearers coming through in Women’s boxing,” said Coldwell.

“It’s been a long camp having to juggle things about but I’ve had some time off recently to concentrate on the fight,” said Skelly. “It’s a massive risk for Amy to take at her age, she won’t have felt power like this from a more mature fighter. This fight opens doors, I believe in myself and want to reach World level.”

Promoter Eddie Hearn added: “We’ve seen some amazing domestic fights recently in women’s boxing and this is another cracker. Two unbeaten fighters gunning for a World Title, the winner here will put themselves into contention for just that in 2021.”

Timlin vs Skelly joins McCarthy vs Laggoune and Selby vs Kambosos Jr on the Usyk-Chisora undercard with more additions to be confirmed shortly.