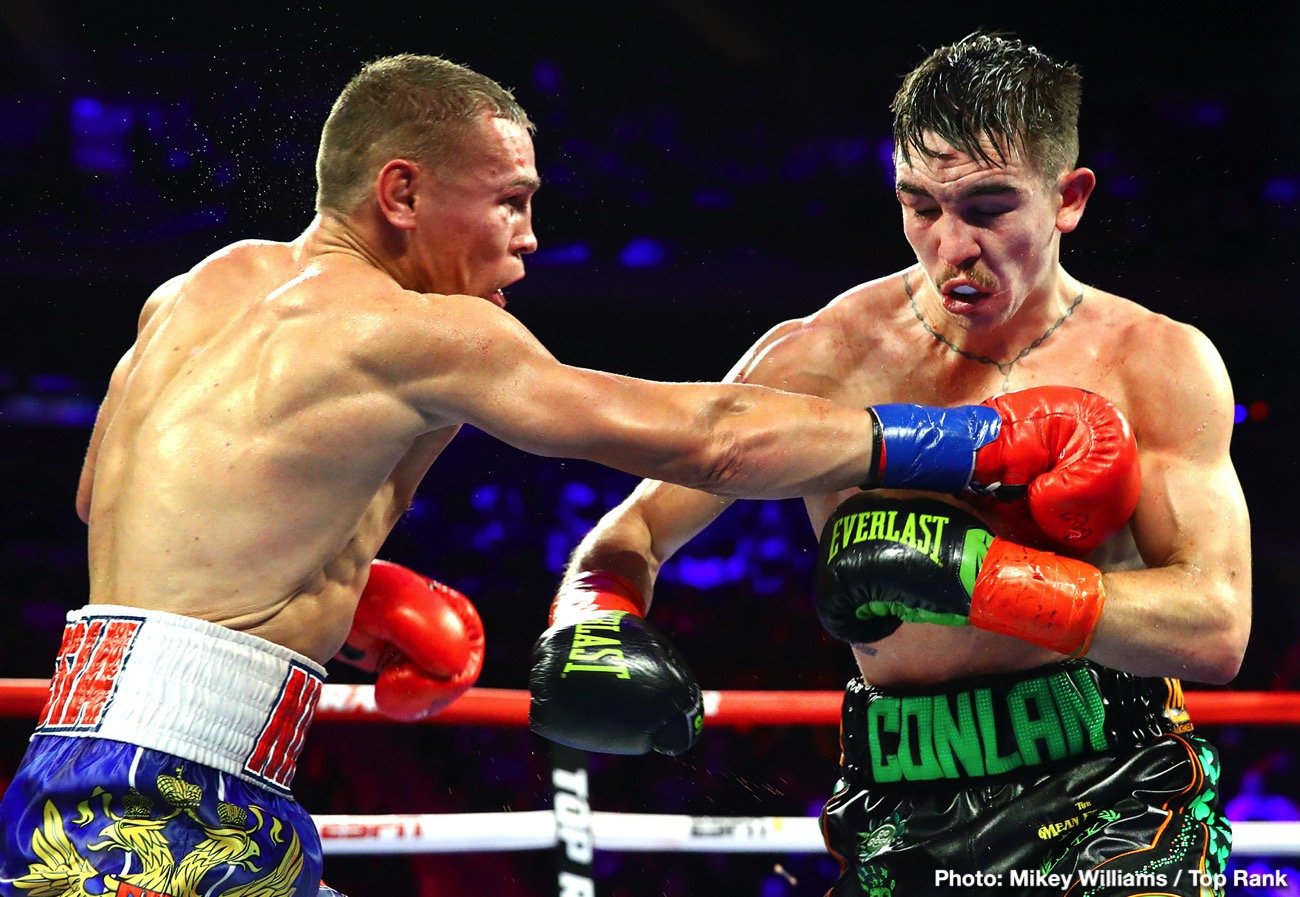 By Charles Brun: Michael Conlan has suffered a sprained ankle, and he won’t be able to take on Isaac Dogboe on December 5th as planned.

That would have been a tough fight for Conlan, and there’s a good chance that Dogboe could have done a number on him. You can argue that the injury has saved Conlan from suffering his first career defeat.

In other words, the two-time Irish Olympian has a sprained ankle. Conlan’s injury disappointing news for sure, as he’s now off the Tyson Fury undercard on December 5th.

Conlan last fought in August in beating Sofiane Takoucht by a tenth round knockout. Michael took a lot of criticism from boxing fans for facing Takoucht rather than facing Emmanuel Navarrete for the vacant WBO featherweight title.

Michael chose not to fight Navarrete

Conlan was ranked #1 with the WBO at 126, and he could have fought Navarrete for the vacant featherweight title after Shakur Stevenson vacated the belt recently.

Rather than go after the WBO featherweight title against Navarrete, Conlan took the easy road in facing the 35-year-old Takoucht (35-5-1, 13 KOs) second-round knockout loss to Josh Warrington last year in October 2019. 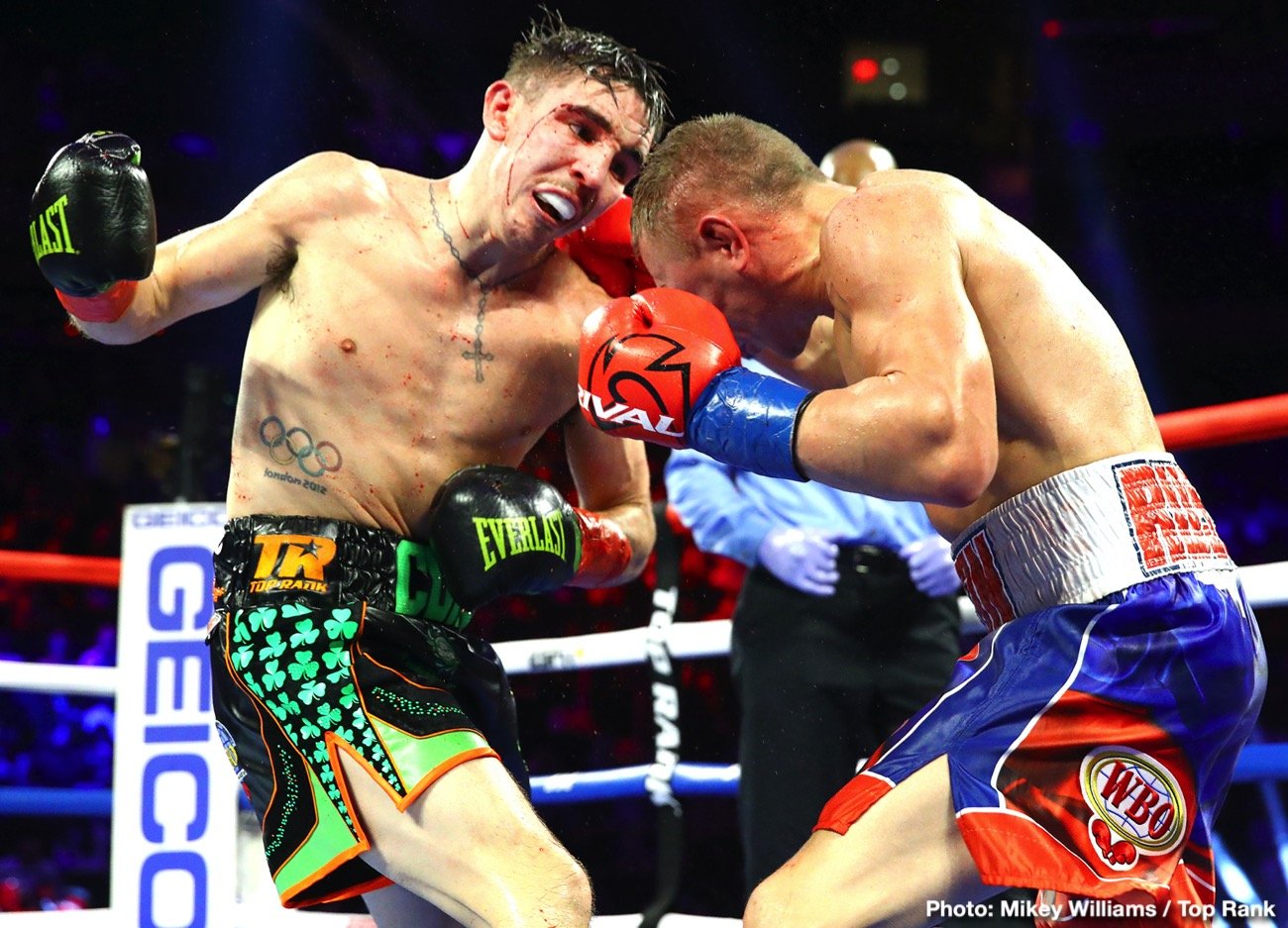 It didn’t look good in two ways for Conlan to take on Takoucht. First off, Conlan was fighting a guy that had been knocked out in the second round in his previous fight last year. Secondly, Conlan chose not to take on Navarrete for the vacant WBO 126-lb title.

If the 28-year-old Conlan were younger, and if he had never fought in two Olympics, you could understand him choosing not to face Navarrete instead of going the easy way against Takoucht. It was troubling that Conlan went the opposite direction of Navarrete and fought a guy coming off a 2nd round knockout.

Absolutely devastated to announce I will no longer be fighting December 5th due to rupturing my ATFL during a training session on Wednesday, back home now recovering. Doc said I’ll be out for 8-12 weeks but I’ll be back sooner, just watch! #ChampionMindset #TheConlanRevolution pic.twitter.com/1QpfJIEzqp

The two-time Olympic gold medalist Vasyl Lomachenko is an example of a fighter that immediately wanted to take on the best in his pro career.

Then you’ve got the two-time Olympian Conlan, who is still in the slow lane and who knows when he’ll ever step it up. To say that Conlan is trailing Lomachenko with the way he progressed during his career is putting it mildly.

An ATFL is an Anterior TaloFibular Ligament, and for that to rupture, it’s a sprain. With those types of things, it’s possible that Conlan could come back soon, but obviously, the fight with Dogboe still won’t be happening on December 5th.

It was a tough ask for Conlan, 28, to take on a talented fighter like former WBO super bantamweight champion Dogboe (21-2, 15 KOs), so it might be a good thing that he suffered the injury.

To fight someone as good as Dogboe, you’d like to have seen them in action against other top fighters in the past to get them ready for what’s in store for him.

Unfortunately, Conlan has never fought anyone remotely close to Dogboe’s level during his three-year pro career, and it would be a disaster potentially.

Jaime Munguia Prevails in the Trenches over Tureano Johnson »